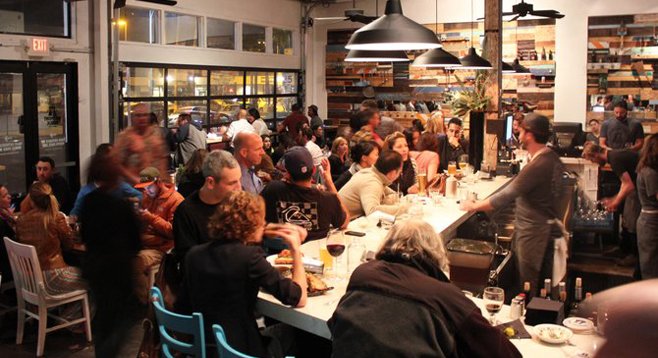 Have you ever walked into a restaurant, perused the menu, and felt like it was custom-designed around your taste? It’s a rare occurrence, but every now and then, it’s like a chef has reached into my cluttered mind and drawn out everything I love. Such was the case when I visited Waypoint Public (3794 30th Street, North Park), the beer-centric, casual social hub and eatery that late last year filled in the space that formerly housed The Linkery.

Yes, part of my instant infatuation with the new eatery was an outstanding beer list cultivated by Brian Jensen, a partner in the business who also owns and operates San Diego’s pair of Bottlecraft retail beer stores. Like me, Jensen craves variety. As such, Waypoint Public’s list features an impressive array of beer styles, most procured locally or within California, including a whopping three sour ales at all times. In the restaurant’s first three months, it’s already gone through hundreds of beers. On my visit, I was able to sample a half-dozen brews I’d never even heard of. Me! Now, that’s noteworthy. 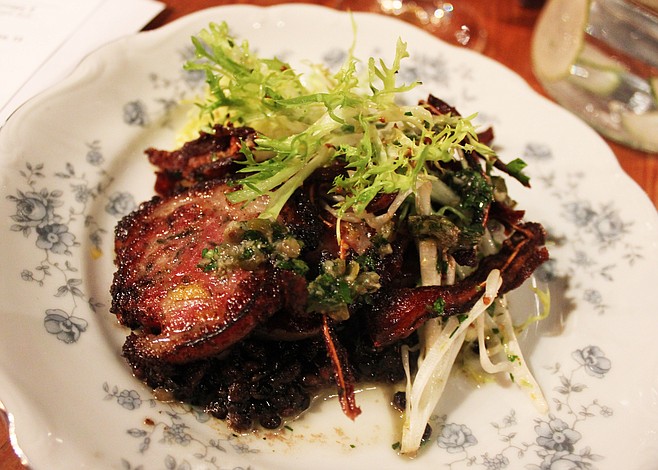 A starter of pig's trotters with crispy pig ear, only at Waypoint Public.

But there’s a lot more to this story than the beverage chapter, and all of it stems from Amanda Baumgarten, another top-notch resource brought in as a partner after helming the kitchen at La Jolla’s Herringbone. While there, she introduced San Diego to her cooking style, showing a devotion to getting top product and treating her ingredients with care, displaying a knack for finding interesting and harmonious flavor combinations, and, most impressively, demonstrating restraint. But she didn’t look nearly as happy doing it as she does strutting around with a smile on her face and spring in her step at Waypoint Public. It’s clear having a platform where she can cook her food free of oversight agrees with her. And it agreed with me, too.

My favorite types of cuisine are Creole, classic French from-scratchery, and Mexican (of course, being a native San Diegan, I have a soft spot for the SoCal style of Ameri-Mex that spawned such wonders as the California Burrito and carne asada nachos). I also love a good ol’, two-hands-required burger. So, imagine my elation when Baumgarten’s menu turned up fried green tomatoes, a date and duck terrine, blood sausage crostini, and a burger topped with an egg, pulled pork, and tomatillo salsa. And that doesn’t even cover what I ordered. 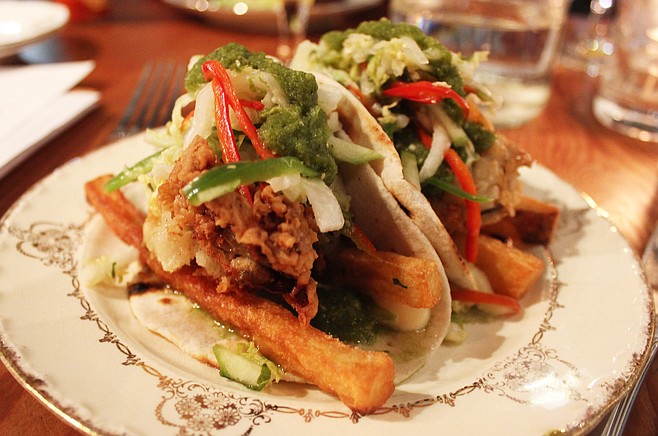 A Creole- and California-ized take on tacos make for a tasty starter at Waypoint Public.

For me, the obvious starters were tacos fusing three things I love — a fried oyster po’ boy, tacos, and the aforementioned Golden State burrito — and pig’s trotters stuffed with apricots and chiles with crispy pig’s ears and lentils. The latter is an artisanal treat that eats like a meal, offering rich, sticky, salty, and succulent pork flavor with a hint of mustardy tang and a nice touch of crunchy texture to offset the soft lentils. The po’ boy’s tacos packs a whole lot into white corn tortillas, namely plump breaded oysters, plank-shaped French fries (the Cali burrito twist), smoky tomatillo salsa, and a jicama slaw that brings on an essential blast of tartness to lighten up these over-stuffed, tasty apps. 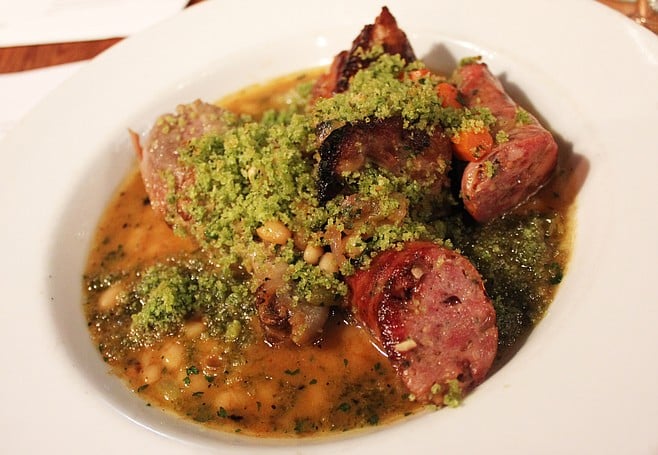 Entrées are mostly $20 and under, which I found impressive considering how filling each of them is. Case in point: the cassoulet. It’s one of my favorites, particularly come winter time, so I’ve ordered many in my day. Baumgarten’s was, by far, the heartiest. On top of a nicely confited leg of duck, it includes a hefty hunk of accommodatingly tender pork belly (an item that also livens up a bowl of mussels on the mains list) and a large Toulouse sausage link. I hated to take a break from eating it to take notes, but a review of my scrawling reminds me of just how moist and nicely spiced the dish was. Spice was also at the forefront in a grilled albacore served with black eyed peas seeping lovely, orange rendered chorizo oil.

If there’s any knock, it’s that the place is a bit crowded. The floor plan has tables that pack folks in almost as close as smallish Manhattan hotspots, and with a bar often lacking even one empty seat and food runners in constant motion, it’s difficult to get across the dining room, which is essential if one wants to use the restroom. But more seats increases the chance of getting one, so there is a plus to balance out this minus.

Great beer and food is what I’m constantly seeking. Many have come to the Waypoint Public space in search of both. Many left it disappointed in its former Linkery life, but don’t let those memories keep you from giving the building a second shot, for in its new identity it has much more to offer along with better service, greater efficiencies, and more reasonable prices. I’ll definitely be back.