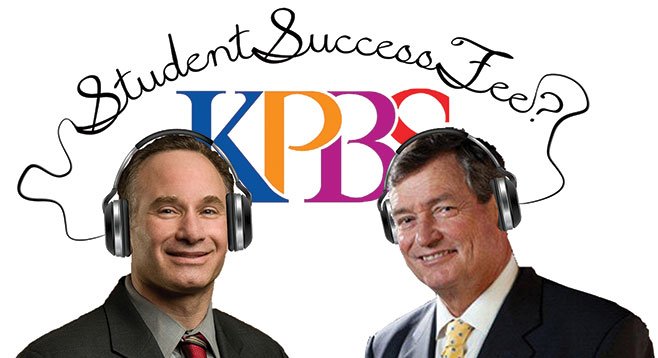 Money demands seem never to stop growing at San Diego State University, despite 2012’s voter approval of Jerry Brown’s massive state-tax increase. So the venerable institution — led by president Elliot Hirshman, who famously makes $400,000 a year — is again on the prowl for more ways to bring in the big bucks.

One idea is to make the SDSU college-goers pay an extra “student success” fee that could range from $200 to $500 each semester. Students who will have to cough up the extra funds are being “consulted” by the university, but the ultimate decision is in the hands of California State University chancellor Timothy White in Long Beach.

SDSU says the extra money would be used for added faculty and classes, but skeptics note that the university here runs a bevy of theoretically non-essential, largely political operations that gobble up cash at a prodigious rate. One in particular, SDSU’s public broadcasting arm KPBS, was unionized last year and could face potentially costly negotiations with its editorial workers. The subsidiary is out with a call for a professional to come up with additional scratch.

“KPBS, a department of San Diego State University, seeks a Director of Development to be involved in all aspects of major gift fundraising,” says a recent university help-wanted notice. “Primary responsibilities include major gift solicitations, management of the Producers Club, and its associated affinity groups, grant writing, and the Friends for Life planned giving program. As a major gifts officer, the Director will research, identify, cultivate and solicit major gift prospects of $25,000 a year or more by working closely with the Assistant General Manager of Development.” The new hire is expected to “identify prospects and solicit planned gifts,” and “develop and produce on-air spots; attend and participate in departmental and station events in addition to donor cultivation events; [and] represent the stations at major social events that KPBS co-sponsors.” The job requires “some travel and evening and weekend hours.” No salary is given.

Over the years, critics have accused the university of adjusting KPBS’s news coverage and choice of visiting editorialists and reporters to attract and keep the lucrative backing of affluent donors, including Qualcomm billionaire Democrat Irwin Jacobs, for whom the KPBS newsroom is named. SDSU has denied the charges.