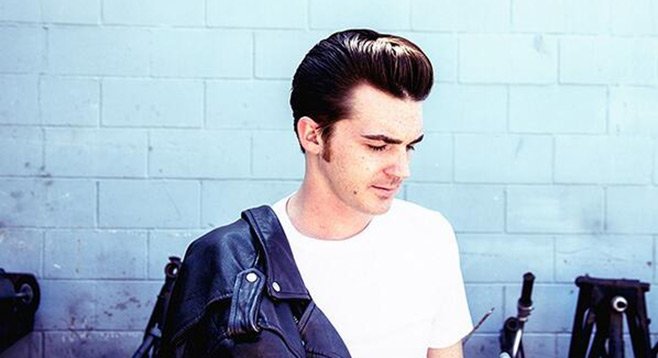 Former TV star (Drake & Josh, filmed in San Diego)–turned–plunking tunester Drake Bell has a new persona ready to spit-shine: rockabilly boogie! He took some questions from the Reader over email.

What are your memories of the San Diego area?

I used to go to San Diego all the time to hang out. My cousin played for the San Diego Padres and my brother lives down there. I love going to the zoo and walking around Old Town.

How close were you to your cousin, Padres all-star closer Heath Bell?

When I was little, Heath used to take me out and give me pointers on how to play. Everybody knew he would be a professional baseball player. He was so driven and talented! Baseball was always his main focus.

What were the best and worst things about being a teen TV star?

The best thing was definitely the fact that I was able to spend my youth doing what I love! I was learning so much about the career that I wanted to pursue for the rest of my life. Getting to travel and meeting awesome people around the world was amazing, too. I would not trade those experiences for anything in the world!

There are no downsides to it, really. I mean, I get to be Spiderman for a couple of hours and call it work!

How did your earlier musical experiences prepare you for the music of Ready Steady Go?

I grew up idolizing Brian Setzer and trying to sound as if I was from the ’50s. That’s the kind of music I always wanted to put out there. I have a huge vinyl collection and appreciation for rock and roll. My dream has been to have my rock band behind me, play live, and entertain. This record is exactly what I wanted my music to be from the beginning.

Why’d you remake yourself as a rockabilly cat?

If you look back to a picture of me when I was 12 years old, you will probably see me in a leather jacket trying to look like Elvis! My first two records were influenced by the Beatles and the Beach Boys. So I wouldn’t call it a complete “remake.” I just finally got to do what I always wanted to do. I couldn’t really show my tattoos and slick my hair back while on a teen TV show!

Peter Collins was one of the producers of my record, and he rounded up the musicians as well as worked with me on choosing which songs would go on the album. We worked very closely through the entire process. David Leonard was the engineer that made all these sounds so amazing! He helped with vocals, guitar tones, everything! He is very prolific and has an incredible catalog.

Brian Setzer helped me produce the record, suggested musicians, and guided us through rockabilly. He gave us direction on how to put an authentic stamp to the music and really make it come across as genuine. Dave Kaplan made it all happen! He put everyone together and got everyone onboard on this record. He is the puppet master! To get all these guys in one room with the goal of creating my new record is just unbelievable! I could not be more thankful to be given the opportunity to work with these legends.

You cover songs by Queen, the Move, Billy Joel, and the Kinks. What led you to pick those songs?

I grew up loving them and their songs. I was driving around one day and I thought it would be a great idea to throw in a bass and slightly tweak the songs to make them sound rockabilly. I wanted to let my fans hear these songs, since many of them may have grown up listening to Top 40 only. I wanted to pass the knowledge on to the younger generation.

Which songs were the most challenging to get down, and why?

“I Won’t Stand in Your Way” was probably the most challenging because there is a lot of vocal parts that we needed to make sure sounded right. I was so lucky to have Brian [Setzer] involved in this, since he provided us with all the right guitar tones.

It’s a very special track to me...I wanted it to sound perfect. I wanted it to be classic and current at the same time. In the end we achieved what we were going for!