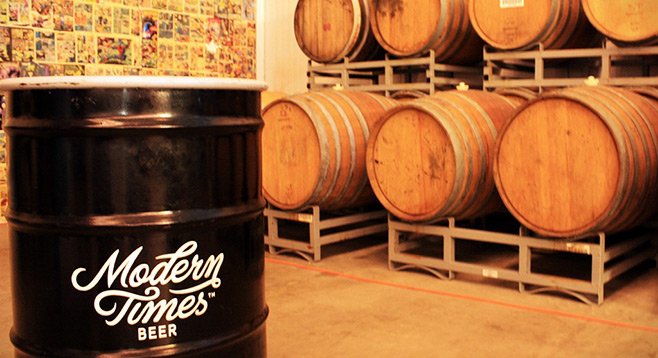 Starting a brewery is mostly not about beer

It’s easy to dream about working in a brewery, especially when you are working on a computer all day. The thought of manual labor, the fun and social nature of the craft beer community, a passion for the product you are creating, a hobby turned profession — all are intoxicating. Jacob McKean from Modern Times gave a lecture in the Overview of Brewing class that snapped us all back into the reality of what it is really like to work in the brewing industry.

Jacob is the founder of Modern Times brewery in San Diego and gave us a very honest lecture on what it was like to start a midsize brewery. He basically told us that if you couldn’t imagine yourself starting a food processing business like a salsa company then you should NOT start a brewery.

Jacob outlined for us how he raised $1.25 million in capital over a six-month period, how he launched a successful Kickstarter campaign, and how he managed the construction of his brewery. Jacob is the only partner in the business and, although this gives him the freedom to make all decisions and avoid potential conflict with other partners, it has created unbelievable workloads. He talked about the stress he was (and continues to be) under and the effects it has had on him. He used the blog on the brewery’s website as his therapy and documented the process of starting a brewery… I recommend his blog post entitled “Starting a Brewery is Mostly Not About Beer.”

A Type 23 license authorizes the same privileges and restrictions as a Type 01 (large beer manufacturer, over 60,000 barrels per year) and allows for the use of six auxiliary licenses. A Type 23 license allows a brewery to manufacture beer, have tasting on premises, operate a restaurant adjacent to the premises with beer and wine sales, and sell beer in packages directly to consumers, retailers, and wholesalers. Breweries can use provisions to duplicate the Type 23 license as many times as they want, but the duplicated licenses only allow the sale of beer and not manufacturing.  Modern Times will be employing this method to open a new tasting room in North Park.

In researching licenses, I learned about “tied house” laws. Tied house laws apply both federally and at the state level and are meant to prevent one business or person in the alcohol industry from operating in more than one tier in the industry (there are three tiers: manufacturing, distribution, and retail). Dozens of exceptions to tied house laws have worked their way into the California ABC Act.  For example, in the Type 23 licenses we see the tiers are not kept separate and can operate with 6 auxiliary licenses before running into a tied house conflict. In my new-found interest in licenses I have discovered the coffee shop I am currently writing in has a Type 41 liquor license so I can have both coffee and beer in the same place.

Saturday, March 8, is International Women’s Collaboration Brew Day. Project Venus and the Pink Boots Society have organized this collaboration brew day in which over 70 breweries around the world will be participating.... Although I won’t be brewing Saturday, I did recently brew with another woman from the first cohort of students in the UCSD Extension Brewing Certificate Program. We brewed a version of Hopworks Urban Brewery’s Survival Seven Grain Stout to bring to the Technology of Brewing final.

While we were brewing we got to talking about women in brewing. We spent most of our time talking about what led to our interest in developing a career in the brewing industry, rather than just being content with drinking and enjoying beer as a hobby. We both have science backgrounds and that seemed to fuel our desire to work in the industry. My friend is a chemist by training and loves how her passion for beer can also be combined with her love of science and engineering. Her kitchen looked like a chemistry lab as she meticulously adjusted the water chemistry of our brewing water.