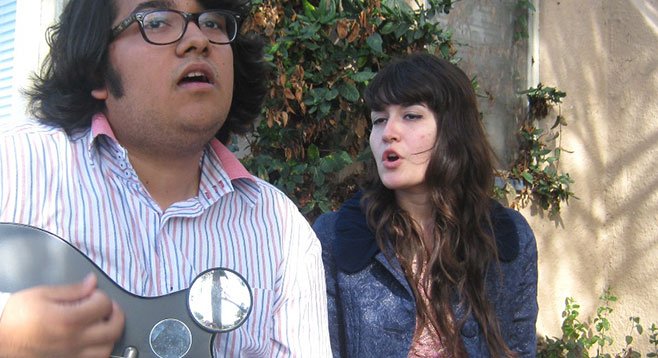 “I heard the White Stripes’ ‘Dead Leaves and Dirty Ground’ on my sister’s MP3 player in 2005. It sounded like nothing I’d ever heard. A few years later, I discovered garage-revival bands like Black Keys and Thee Oh Sees. I started teaching myself to play in 2008. I’d just look up chords on the Internet and practice until I got calluses on my fingertips.”

“I fell in love with Cate Le Bon’s ‘Mug Museum’ partly because of the double lead guitars, which remind me of Television. I started looking for her tour dates and found one for the Soda Bar. I wouldn’t have been able to go, since I’m under 21. Then it came to me: ‘Why don’t you email them to get on the bill?’ I didn’t expect it to actually happen, but it was worth a try.”

“I live with so many people that it’s hard to make room for band practice — someone will always be on the phone or watching TV. I was able to use my living room to rehearse for the Soda Bar show because my mother was in the hospital — she’s been fighting colon cancer for about four years. It was the saddest, yet most productive month as a musician.”

“Being a Mexican-American makes it difficult to succeed in a predominantly white music field. I can feel it whenever I get on stage...before I even start playing, I’m judged by my skin color. They expect me to start playing ‘La Bamba’ or something. I like to think I’m not the only Chicano who loves and identifies with rock ’n’ roll. I named our first album Meximericana because it’s American music, written by a Mexican-American in a border town. My joke, while recording it, was, “It’s time for a brown man to steal what the white man stole from the black man.”

The Soda Bar show was Peaches DiPierro’s first as lead vocalist with the FAs. “It was a little nerve-racking, mostly because the environment seemed to demand the best,” relates the Grossmont College music major. “But sharing a stage with such talented musicians was amazing. It was definitely a show to remember.”