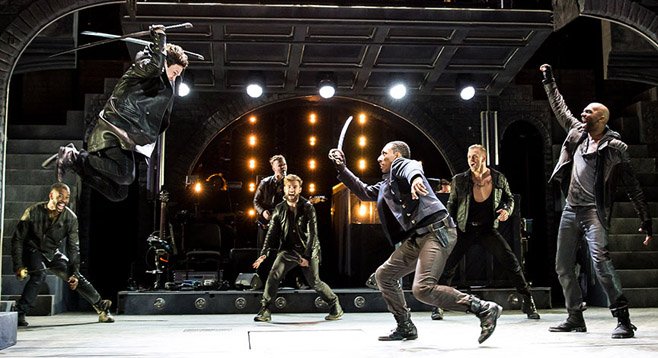 The Last Goodbye at the Old Globe

First things first. Barry Edelstein, the Old Globe’s new artistic director, has begun his tenure with what amounts to a position statement: do not expect the safe, commercial fare of the previous administration. Though the results are mixed so far, Samuel D. Hunter’s The Few and Michael Kimmel’s The Last Goodbye signal fresh new directions for the theater previously content to rehash Broadway hits.

The Last Goodbye sounds intriguing on paper: graft the deeply personal songs of the late Jeff Buckley onto Shakespeare’s Romeo and Juliet.

Many of Buckley’s songs go on quests: for answers, at times, or just making sense in a vast, wholly alien universe. What better match than a play about teens gifted with a love worthy of sonnets, and cursed by the forces that should nurture it?

The result, at present, is an often dazzling, sometimes flat rock concert and an abridged version of the play. The music comes first, the lyrics, third, or fourth. 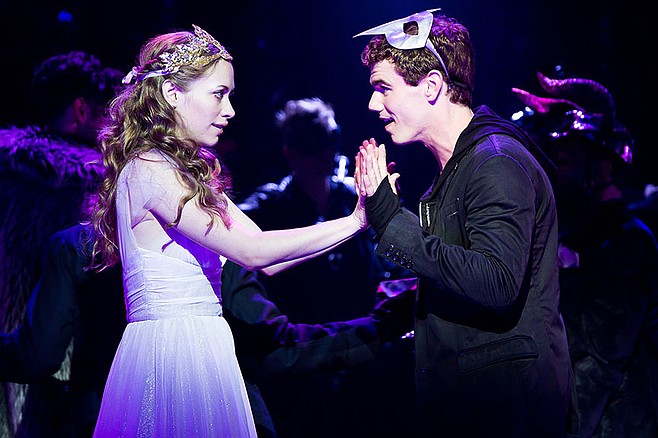 Talisa Friedman as Juliet and Jay Armstrong Johnson as Romeo.

The script says it will present “two hours traffic on stage.” And it does, literally. The musical condenses Shakespeare to under 120 minutes, with an intermission. The result is often “traffic,” fast and furious from the get-go.

Shortcuts abound. The Nurse, one of the great secondary characters of all time, becomes a terse cartoon; Juliet doesn’t get to teach Romeo her master class on how to speak from the heart; and – the unkindest cut of all – there’s no Queen Mab speech, one of the richest set pieces in all dramatic literature. Gone, baby, gone.

It’s as if the production has a morbid fear of gridlock, which any long speech would create. So the story’s reduced to snippets and everything’s external: no subtexts, or even pauses for thought.

The production visually looks out of place at the Old Globe. Alex Timbers’ direction smartly shoots the eye all over the stage, to platforms above, small intimate corners, and – aided by Sonya Tayeh’s swift, sharp choreography – center-stage spectacles. We aren’t used to seeing such bold inventiveness in this setting. Or his sudden freeze-frames that stop time dead.

Or, for that matter, Justin Townsend’s amazing lighting. He side-, slant-, and cone-lights scenes, blazing them with gaudy Vegas-worthy reds, limes, and violets, then leaping back 400 years and bathing a moment with the Old Masters’ creamy white, almost sacred aura.

The cast, almost to a person, sings better than they act, and substitute stagey attitude for seriousness. You half expect them to punctuate sentences with “like.” 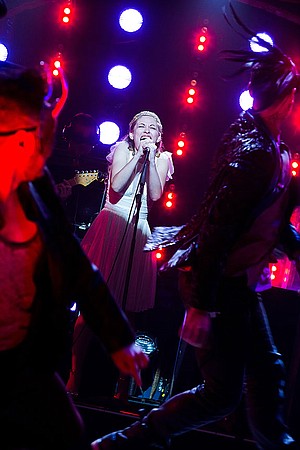 Jay Armstrong Johnson’s Romeo does strong vocals (“Forget Her,” in particular), but often merely recites his lines without emphases, as does Stephen Bogardus’s Friar Laurence, whose stock gestures annoy.

The exceptions: Talisa Friedman’s Juliet is believably 14, torn to shreds, and able to project the tragic stature the part calls for. Her high-wire duets with Johnson, especially “The Last Goodbye,” are a highlight. Brandon Gill sings the musical’s ace-in-the hole anthem – Buckley’s adaptation of Leonard Cohen’s “Hallelujah” – to good effect.

At the same time, the book tweaks the ending with a momentary resurrection that deflates the tragedy.

The musical gives songs to unexpected characters. Tybalt (Jeremy Woodard) has one, as does Old Capulet (Daniel Oreskes). And Mercutio (Hale Appelman, best of show) rises from the dead and roars “Eternal Life” at the star-crossed families: “Eternal life is now on my trail/Got my red glitter coffin, man, just need one last nail/While all these ugly gentlemen play out their foolish games/there’s a flaming red horizon that screams our names.”

The lyrics spit a plague on both houses, but as so often happens, the music drowns them out in this interesting but wildly uneven production.

I saw this last Wednesday night, so we may not have seen the same performance. The storyline is very direct, and some shortcuts are taken. It does have a "rock opera" feel for me, which isn't necessarily a bad thing.

Could it bring some people into the theater (and into what Shakespeare has to offer) who might not otherwise have been open to the experience? I say yes, which is why these creative collaborations can be so enriching for younger people to see.

Think of all the variations of Faust, and how exposure to one version can lead to interest in reading or seeing another version.

Shakespeare does happen to be the pinnacle, and the language is challenging, so quite a few people are actually afraid of attending a play--which is sad in its own way. So--a production such is this one can break the Shakespeare barrier for some people, and allow them to see they understand more than they thought they would.

I liked the music, some moments were stronger than others. (I could have used more of "Hallelujah", but then I could happily listen to that for a very long time!) The band was very strong, the energy levels in their variety very good. It is a young cast for the most part and I do think that some nuances will continue to emerge and performances will gain some depth.

The question and answer afterwards was very enlightening as the ensemble nature of the production was mentioned, and it was clear that the performers truly enjoyed working with one another.

I think they have something here.

They might. One thing could improve immediately. They seemed to assume that the audience already knew Buckley's lyrics. so the band (quite good indeed) powered over them and made over half - at least for me - unintelligible. The stage is always lively, but they need a better sound mix.