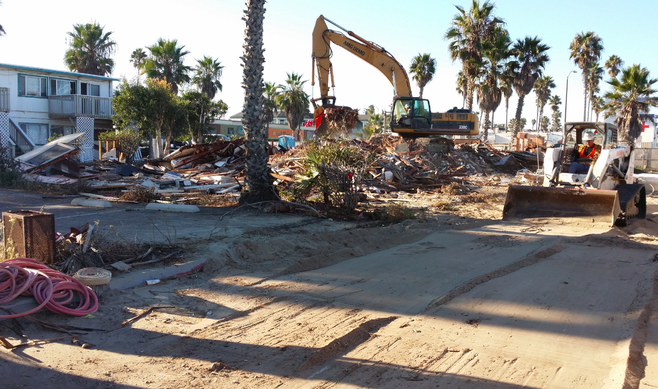 New beachfront homes to be built in Ocean Beach

A total of ten, with a view of the pier

Demolition has begun on the corner of Saratoga Avenue and Abbott Street in Ocean Beach. What has been an unsightly locale with a fence around it for nine months has finally been torn down to make way for ten attached, single-family homes.

I spoke with the onsite construction foreman for Clark Realty on October 16 about the plans for the area right next to the main lifeguard tower on Abbott. He said there will be seven 3-bedroom and three 2-bedroom homes built on the site. He had no idea yet how much the homes will sell for. It could be up to one and a half years before the project is completed.

The original Hodad’s building (which eventually became a restaurant named Dempsey's) had been on the lot and was demolished along with two apartment complexes. Pat James, president of the O.B. Historical Society, was there and told me it was sad to see that old restaurant building go, as it held a lot of memories for him.

The rep for Clark Realty also mentioned that there would be an onsite archaeological monitor to observe the grading by bulldozers, as the surrounding area is rich with evidence of Native American settlements.

This is the beginning of the end for Ocean Beach as we know it. Over the next twenty years it will be transformed into a smaller version of La Jolla with rude drivers and small boutiques selling overpriced trinkets and perfume.

And no more bearded men in overcoats selling 'shrooms.