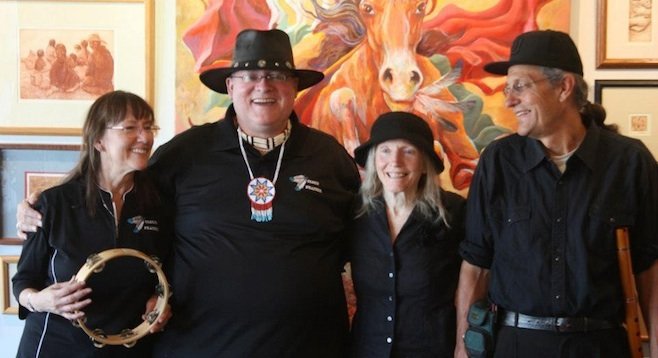 Since the Indian-casino boom began 25 years ago, certain Native-American tribes have become flush with cash.

Mario Carrillo, singer/songwriter/guitarist of Cloud Feather, is a Native-American member of one of the have-not tribes. About a fourth of his band’s repertoire is about how rich tribes are not helping the poor ones.

Carrillo, who lives in Vista, is a member of the Juaneño tribe. “Our band technically has a reservation on Camp Pendleton. They will let us use it for our pow-wows and ghost dances, but we really can’t live on it.” He says his band is asking to be recognized by the federal government so that it can get its own casino. “But our tribe split into three different factions, which makes it harder to get recognized. They are only hurting themselves by splitting up. The ones that are successful, like Rincon, don’t split up.”

Carrillo founded Cloud Feather with his wife Elisa and San Pasqual tribe member Jimi Igo and his wife Jera. They play harmony-rich folk-rock as well as country, gospel, and blues. “Some people liken us to [’70s band] Firefall because of the flute and the harmonies.”

Carrillo addresses Native-American realities in his music. “It’s ridiculous how some tribes keep expelling members. There was one that just kicked out 60 members because of their blood quorum. Like, if you are only 75 percent, they will kick you out. Which means more money for those who are 100 percent.”