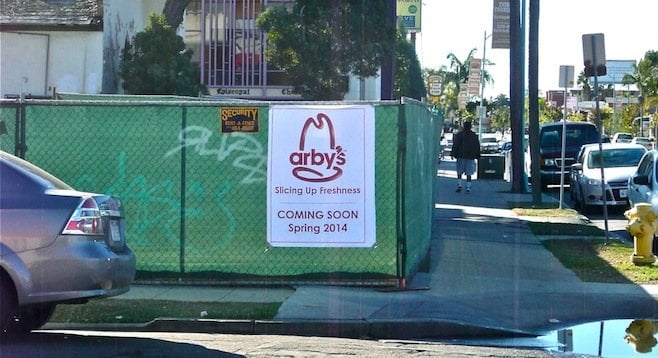 At the beginning of November, demolition began on the two tiny boarded-up studio-sized homes on the corner of Gunn and 30th streets in North Park.

Construction fencing went up around the former Saint Luke’s Episcopal Church property about two weeks ago. Recently, an “Arby’s” sign was put on the fencing to indicate what’s to come. Then, a few days ago, the sign was removed.

The location of the construction project is across the street from Saguaro's Mexican restaurant and drive-through, which has some residents worried: Could another drive-through restaurant be established in North Park?

Residents near the intersection of 30th and Upas Street already have a lawsuit contesting the Jack in the Box project, which was recently “remodeled” — almost completely demolished and rebuilt with a reconfigured drive-through. The drive-through is a big point of contention.

We have no plans beyond remediating deferred maintenance and rejuvenating the congregation. Rest assured if anything is contemplated that might impact the neighborhood we would certainly let folks know.

Bishop Mathes said nothing in his communications about the posting of the Arby's sign on the fence installed around the property. I'm curious what the Diocese has to say about the posting of the sign itself. Did they even know about it, or was this a well played practical joke by some joker in North Park to see what the reaction would be? If so, well done joker, but even more: well done to the residents & community activists of North Park for jumping on this fast and hard to make sure the city is not sneaking more illegal development into our neighborhoods.

This also gives insight that the issue of fast food restaurants/drive throughs and other auto intensive commercial use must be addressed specifically in the community plan, being updated right now. It is evident that the City will not enforce it's own muni code in these kinds of issues (Jack in the Box is just one example), so we need to be as detailed and specific as possible in our community plan to protect our neighborhoods against inappropriate development.