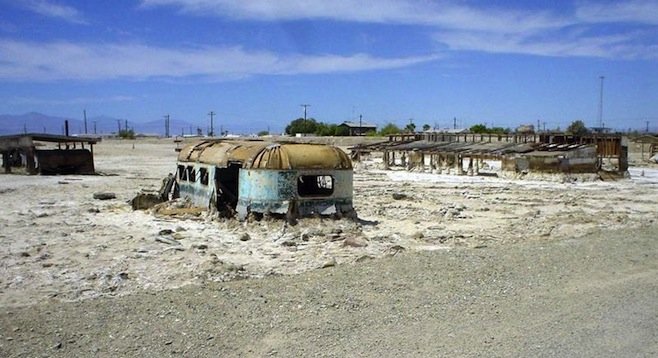 San Diego's deal to take water from the Imperial Valley to meet the demands of growth and development here will begin taking a dramatic and expensive toll on the environment of the Salton Sea in 2017, says a new report by the California state auditor's office.

The clock is ticking toward a deadline in four years, according to the audit, when an agreement with the Imperial Valley water district to supply so-called mitigation water to the landlocked sea will expire.

Without costly action, likely financed by California taxpayers, the level of the sea will drop radically, exposing thousands of acres of new shoreline and creating a possible air-pollution disaster.

After 2017, when mitigation water is no longer conveyed into the Salton Sea, experts predict that the size of the sea will begin to decrease dramatically, causing it to become increasingly saline.

According to the experts, this will result in negative environmental impacts, including reduced habitat for fish and wildlife and increased air pollution from the dust arising from exposed portions of the dried‐up seabed

Nine alternative scenarios have been proposed, the report says, but funding remains uncertain.

The amount of land that each of the alternatives proposed to restore ranged from 110,400 acres to 224,600 acres, which equates to roughly 50 percent to nearly 100 percent of the Salton Sea’s acreage...

However, the State — after more than six years — has yet to identify an adequate funding mechanism for any of the alternatives presented, including the Preferred Alternative, perhaps because of their associated costs

Specifically, the Resources Agency estimated that the costs of each alternative would be in the billions of dollars spread out over a 75‐year period, ranging from a minimum of $2.3 billion to construct the least costly alternative up to $8.9 billion for the Preferred Alternative....

In the absence of full funding for any of the proposed restoration alternatives, officials from the Resources Agency reported that the State’s approach has been incremental, meaning that the agencies involved have undertaken restoration activities only as funding becomes available.

So far, much of the money spent on efforts to deal with the problem has been paid out in consulting and staff costs.

The audit calls for more study.

State legislators, the audit says, should require a "feasibility study to analyze and include the extent to which restoration activities could lessen the State’s future financial obligations."

Once the Legislature has approved a restoration plan, it should hold a budget hearing to consider the appropriate funding mechanism.

We should be putting water into the Salton Sea after dividing it into two parts, one of recreation and one for wildlife, as has been suggest before. This would help the area boom instead of becoming yet another waste land that has been depleted for natural resources!

We also should build a high speed rail from SD to the Salton Sea so that SD can have yet another new "bedroom community" for those that want to work in SD but live in a more affordable area.

We are just beginning to see what wind turbines can do!

Imagine a new "future" Multi-Functional Wind Turbine (MFWT™) that could "shift" from producing electricity to making water as the grid load or water "need" changes! This concept would provide a single solution to two of the major problems facing all developing Nations, a reliable source of Energy and a reliable source of Clean Water... Source: Clean Technica http://s.tt/17YRk">http://s.tt/17YRk +

Now put the two together and imagine a new "future" Multi-Functional Wind Turbine (MFWT™) that could "shift" from producing electricity to making water or even Hydrogen (in liquid form) as the grid load or water "need" changed!

Maybe I'll get the first Solar O'Neill (SON) award for the idea!

Like most SoCal's folks, I'm getting tried of this issue. Either flood it again, as it was created 100 years ago, or let it go back to desert, as it was a billion years before that.