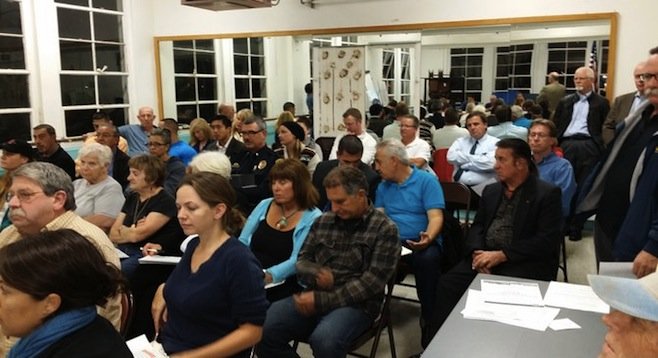 Pharmacy makes their case; planning board to await new info

A heated and vociferous standing-room-only crowd attended the Ocean Beach Planning Board meeting on November 6. Residents were there to hear and discuss the proposal to allow alcohol sales in a new, as-yet-unestablished CVS Pharmacy in the former Apple Tree Market location at 4949 Santa Monica Avenue.

Several locals, including O.B. Town Council president Gretchen Kinney Newsom, got up and spoke against the project and tried to convey the need for fresh produce and more grocery items — not more alcohol.

Planning board member John Ambert claimed the statement was tantamount to extortion.

O.B. MainStreet Association president Denny Knox asked if the company would leave some of the parking lot open to non-CVS customers. The rep for CVS, Tom Wilheim, said they would comply with city codes and will try to work with the community on that issue.

Wilheim claimed 20 to 30 new jobs would be created at the 15,000-square-foot store, which would be mostly devoted to beauty and pharmacy products; 224 square feet would be set aside for liquor sales. A projected 5 percent of sales would be attributable to alcohol. Wilheim also claimed CVS has never offered fresh groceries, but the company is willing to look into it.

Craig Klein wanted CVS to agree to no alcohol sales after dark and more security onsite, which CVS claims it will have in the form of a security guard on duty during all operating hours.

Wilheim also stated that the owner of the building tried to market the building to several grocery stores, but no one was interested. There have been claims that the rent on the building has been the prohibitive factor and is in the $50,000-per-month range.

In the end, the planning board decided to hold off making a decision on whether or not to approve the liquor permit for 90 days, so more information can be presented to the community.

A representative from the SDPD was also present at the meeting; they are required to issue a report that will shed more light on how more alcohol sales would affect the community.

If you haven't noticed, all the drug chains have been opening stores like mad. CVS gobbled up Long's Drug a few years back, and in most of the county, there is a CVS "on every corner", such as with gas stations in the 1950's. (I'm exaggerating, but only a bit.) I've sort of lost track, but I think there are four CVS stores, three Walgreen's, and at least one Rite-Aid here in Vista, That's in addition to a pharmacy in every Walmart and every Target store, and there are still Sav-On pharmacies operating in the Albertson's stores. Why all the building? Medicare Part D has a lot to do with it, but it seems the drug chains are betting heavily on increased government involvement in medical care, and want to have a pharmacist within walking distance of nearly everyone.

CVS has large stores, but none of them I see is doing much business. If they were in any other line of retailing, they would be closing up, but a low level of activity appears to be profitable. So, if the folks in OB are concerned that CVS will have the area awash in booze, beer, and wine, they may be overly concerned. The CVS will likely just be a calm, quiet operation. I find it amusing that CVS is going to have a security guard on duty whenever the store is open. I've NEVER seen a security guard at a CVS before, although in a couple instances, the shopping center has a guard covering all the tenant stores.

The bigger issue is the need for a real food store that sells fresh foodstuffs at reasonable prices. That is the real need, and it sounds as if OB is coming up short.

Thank-you Visduh. I'd worry more about more and more drugs for sale by prescription. Big money there. Too many serious side effects - that's dangerous and not much is cured.

Visduh - There's already a Rite-Aid 2 blocks away that seems to have a security guard patrolling the front door a good portion of the time, though a drugstore rent-a-cop is kind of a novel idea in general outside of the beach area. There's also a CVS store about 2 miles inland in the Sports Arena (in an old Long's location - I liked Long's a lot more personally) area, so anyone really desiring CVS product and their meter-long receipts has it readily available (even by bus it's got to be less than a 15 minute trek, which is saying a lot).

Other thoughts... ...excessive rent is what Hirmez says pushed him out in the first place. He also said that his inability to secure a long-term lease is the reason behind his hesitancy to upgrade the 1960s-era fixtures in the store that, while charmingly dated, left a lot to be desired in the way of keeping refrigerated foodstuffs fresh...what this town really needs is a full-service grocer. Right now there's the Olive Tree, which is insanely limited on selection and quite pricey due to the size of the store, or People's, which is also pricey and not a true "full-service" shop in that they carry no meat or meat by-products. Stump's (IGA), Vons, and Ralph's are all a mile or two outside the village and thus of little use for those who travel on foot or, like me, want something within a five-minute bike ride at least for the purpose of picking up "that one forgotten ingredient."...Hirmez said some time ago that he was going to turn the old B of A building (which he owns) into a new version of the Apple Tree supermarket - why hasn't that happened yet, and will he catch the same kind of hell trying to get a liquor license there?...the CVS claim of 1.5% of floor space (244 square feet out of 15,000) devoted to alcohol and 5% of gross sales is laughable. After frequenting the Rite Aid that they'll be competing with for years (as well as virtually every other drug chain in San Diego), it's readily apparent that the floor space devoted to booze is closer to 5%, and from the easily observable cart contents of the people that surround me it's reasonable to assume that adult beverages have to constitute at least 15% (three times what CVS claims, and I'm being generous here) of total revenues projected...on a personal note, my mother-in-law doesn't drive and has lost complete access to groceries except when getting a ride with my wife or me. I know there are a significant number of people like her in town, some hurting worse than her without access to a borrowed car to leave town to buy food...

You may be correct about the volume of "adult beverage" sales from that CVS. I'd always figured that OB had some sort of alcoholic beverage outlet about every two hundred feet in the business district, and that one more (or one less) would not make much difference. But I do agree that CVS or no, the 'hood needs a real supermarket. If some savvy entrepreneur found a spot, he/she could really clean up. Something like a Sprouts would be great, or even a Fresh and Easy. Er, Fresh and Easy is on the ropes, has been sold by the Brits, and probably isn't going to be adding stores anywhere. Sigh.

Hirmez is waiting to see if a grocer opens in his old building. If not, he will open in the old B of A building he bought awhile back in anticipation of reopening. That's why planning board member John Ambert accused him of extortion.

I see that alcohol and drugs are easier available than food, especially anything fresh and required for health.