Devotee that I am of film noir — Jim Thompson, James Ellroy, and underworld lore, in general — there are a few words in the criminal lexicon that no matter how many times their meanings are spelled out for me, they fail to take root.

Much as I love saying it, the meaning of the Yiddish term vigorish, or merely vig, forever escapes me. It has something to do with bookmaking, numbers, math, and that's it. I'm out. 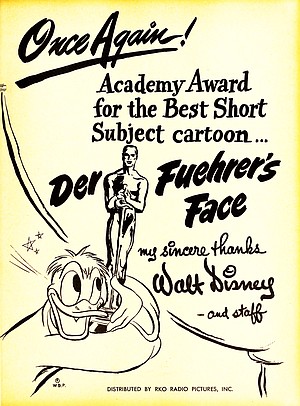 It was in the back room of Chicago's Billy Goat Tavern that the word Illuminati first hit my radar. I thought my girlfriend at the time was asking if I wanted to stop and pick up a pizza on the way home. "Sure," I said. "I could go for Lou Malnati's."

She proceeded to repeat a story she had heard from a co-worker earlier in the day that concerned an elite secret international organization bent on world annihilation through the introjection and projection of others' egos.

It was about this time that a student had introduced me to letters written by Sally Fox, a woman whose nerves had been worn thin thanks to "the interference of a very old, not so funny, violently insane psychopath, Bob Hope." 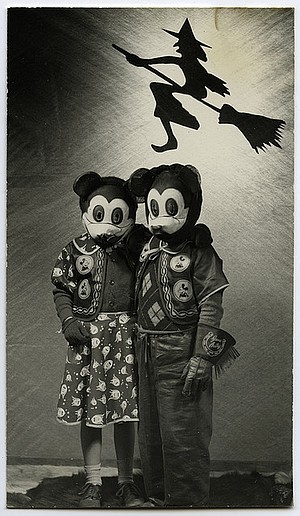 The spawn of Satan.

In a written plea addressed to the investigative reporting staff of CBS News, NBC News, ABC News, CNN, 60 Minutes, United Press International, and The National Enquirer — which shockingly failed to run with it — Ms. Fox wrote, "The whole thing started about seven years ago when I began to 'see' Bob Hope (the comedian) when I would close my eyes and concentrate. Through study, I learned that the reason I could 'see' Bob Hope was because he is violently insane and uses abnormal thinking processes to tamper with the thought patterns of millions."

Hope has since been pegged an "Illuminati pimp" in this eye-closing expose of the comedian's link to the mind control organization. 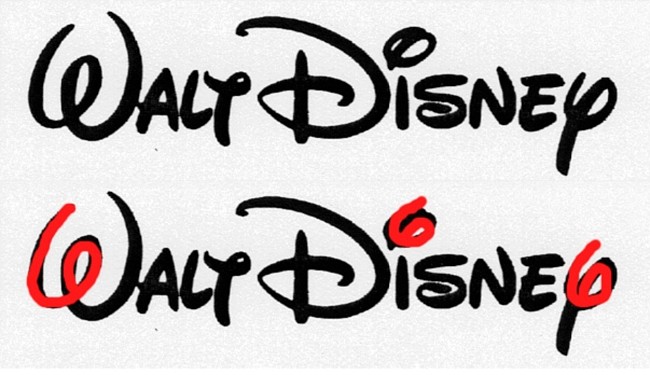 From WWII to Bob Hope USO Christmas Special from the Persian Gulf, Old Ski Nose traversed the globe ostensibly to "entertain" our boys in battle, all the while acting as an Illuminati errand boy, sent by grocery clerks, to collect and dispense top secret information. It's easy to understand Hope's involvement in the nefarious organization, but Mickey Mouse's daddy?! 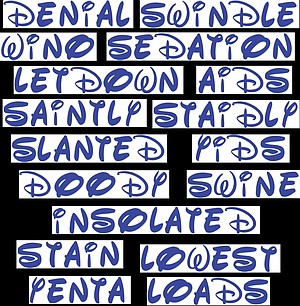 The unhappiest attributes on earth.

And that's just one video! There are thousands more master's theses like this out there that accuse Uncle Walt of using his cartoons as a platform to subliminally control the minds of millions.

While doing a bit of Sunday afternoon research on Disney signage, I accidentally clicked Google Instant's pull-down suggestion of "Disney signature" and found this link that clearly illustrates — at least to me — Walt's famed signature contains the mark of the devil.

Look at all of the cool applicable words I never heard of!

Fortunately for us, most people who would believe such nonsense can't read. Being the conspiracy theorist and Scrabble cheat that I am, I took the extra precaution of running Mr. Disney's name through Anagrammer.com.

Late last night Mr. Hope and I spoke telepathically via the crystal set in my basement. It was the legendary entertainer's suggestion that I interpret Walt's broadly drawn dot above the "i" as the letter "O."

I trust you will agree that my shocking findings provide undeniable justification for Anaheim and Orlando to change the names of their city's favorite tourist destinations to "Illuminatiland®" and "Illuminati World®," respectively.

I Love Your Mind. My aunt Kay has been controlled by IlluminattiDisney forever. She "collected" so much Mickey crap there's no room to walk anywhere in her house. I cleared it once and she filled it up again. More Mickey (and friends) is her mantra. Mind control for sure.

And a lot of writings on Disney's admiration for Hitler would be Verry Interesting.

Two from the Illuminati archives:

What I should have said is I love your mind. It's completely out of control.