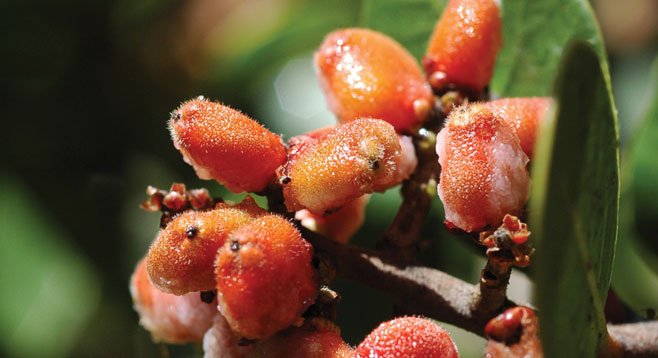 Tecolote Canyon, featured on area maps for almost 200 years, is designated as a natural park 6 miles in length, .25 to .5-mile wide, with a 2-mile tributary totaling just over 900 acres. Elevations range from sea level at the canyon mouth to 320 feet at the head of Tecolote Canyon. The canyon rim is between 315 and 400 feet above sea level.

The geology of the park consists primarily of marine and non-marine sedimentary rocks of the Scripps and Friars Formations of the Eocene Age (45–50 mya). These rocks make up the canyon walls, with Quaternary (1.8 mya) sedimentary rocks capping the mesas. The exception is at the canyon mouth where the northern wall into Bay Park consists of sediments of the Bay Point Formation of the Quaternary Age (200,000 years). The Tecolote recreation center sits on marine sandstone of the San Diego Formation of Pliocene Age (2–3 mya). The canyon floor consists of Holocene (recent) alluvium and slope wash.

Four faults have been mapped in the park, all located near the mouth. Behind the fence at center field of the upper baseball field, the Rose Canyon Fault can be seen where the margins show 50 mya Eocene sandstone of the Scripps Formation against red stippled Pleistocene conglomerate of only a half-million years. The Rose Canyon Fault parallels the San Andreas Fault, extending north through La Jolla shores.

Once past the baseball fields and nature center, follow the access road or trails that parallel first the water channel, then in the direction of the power lines to the end of the golf course, and then east to Genesee Ave. and back. The 4-mile walk turn-around point is at the peak of the hill under the power lines that overlooks the golf course. The longer hike follows the trail closest to the golf course. At the end of the course, turn east to Genesee Ave. and then head back.

Along the trail, look for evidence of owls that the canyon is named for or other birds that include California thrashers, house wrens, hawks, towhees, and ravens. The walk along the trails and/or access road is a combination of good examples of coastal sage scrub, chaparral, and riparian habitats mixed with erosion and power lines. 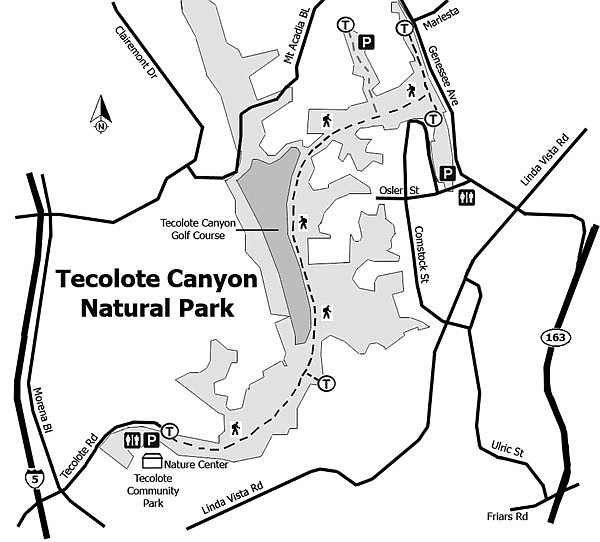 Tecolote Creek, north of the golf course, can run to a depth of 6–8 feet during the rainy season. In the summertime, the creek is normally dry, except for runoff from the course greens. The creek empties into Mission Bay at the Pacific Passage side of Fiesta Island. The creek also contributes to the groundwater table in the lower end of the canyon.

In 1957, the city government planned to use Tecolote Canyon as a sanitary landfill; cattle had grazed there until 1953. This and other development plans were abandoned due to protests from residents of Linda Vista and Clairemont, which led to the Park Procedural Ordinance adopted by the San Diego City Council in 1969. The Tecolote Canyon Park District was initiated by the council in January 1971, then adopted in July 1974, both by a unanimous vote. After the land acquisition was completed, the dedication ceremony was held on April 1, 1978.

Distance from downtown San Diego: Approximately 6 miles. From I-5 take exit 21 for Sea World Dr./Tecolote Rd. Turn right onto Tecolote Rd. and within a mile park is the nature center. The Tecolote Nature Center, when open, has facilities and water.

Hiking length: The hike described here is 4 miles, though it can be extended to a 6.5 hike if the trail is followed close to the intersection of Genesse Ave. and Marlesta Dr. and back.

Difficulty: Easy to moderate (depending on distance walked), with an elevation gain near 400 feet.

I've lived near the canyon for many years. My boys played in the creek that runs through the canyon, a creek that in their time had many crawdads. I had a number of memorable experiences in the canyon, including several encounters with coyotes. Once, as I walked along the golf course, I kept my eye on a coyote who kept himself very visible on the course. Something made me look in another direction and there, very close, was another coyote. I wondered if they had tried to set me up. Are they that intelligent? Another time, walking home at dusk, I came around a turn in the trail and encountered a pack of two adults and several young. Both parties were eager to ignore the other.

Once I saw a large, snow white owl.

Used to see lots of red tailed hawks, but not so much anymore.

And once, after a worker at the golf course had been robbed and shot to death, the police shut down the road out of the course. After a while, I hiked home through the canyon, leaving my car.

I love this canyon. There are places where you can convince yourself you are not in the middle of a huge city. 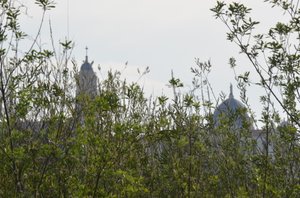 University of San Diego from the floor of the canyon through the brush.