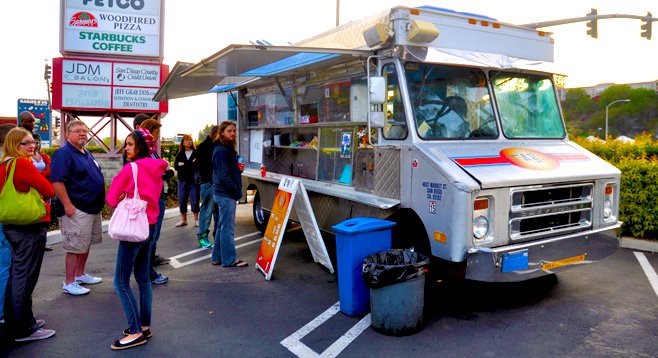 Ask Christian Murcia for his opinion on Del Mar’s recent food truck ban. He’ll tell you that Del Mar is behind the times. “They’re missing out on a current trend. It’s unfortunate,” he says.

Weeks later, on November 19, after receiving complaints from residents and local businesses, the Del Mar City Council placed a 45-day moratorium on issuing new food-truck licenses. They cited their reasoning as an attempt to hammer out new regulations. The city has since renewed the moratorium two more times. At a February 19 meeting, the city council extended the moratorium, this time for 10 months and 15 days.

Currently there are only nine food trucks licensed to operate in Del Mar. On March 12, the Del Mar planning commission presented a draft of the new food-truck ordinance to the city council. 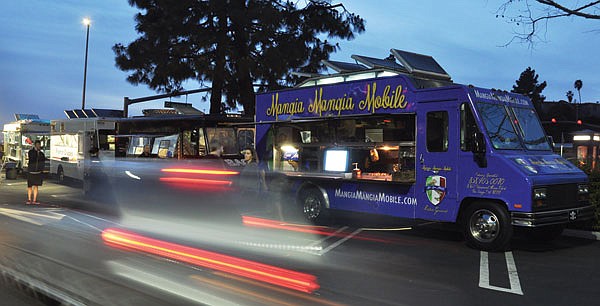 “No one knew what the guidelines were for that kind of mobile business,” says Del Mar mayor Terry Sinnot. “It raised red flags.”

Matt Bator, a member of Del Mar’s Community Planning Commission, says, “Our time line is to present the permanent ordinance on April 1st. If it is accepted, with no major changes, we will meet again for a second reading on April 15th. At that point, there will be a 30-day period before it goes into effect. The ordinance should be adopted by mid-May. New food-truck licenses will be issued at that time....

“We are trying to help the food trucks out by getting this done in time for their busy season. Summer is our goal,” Bator says.

Technically, Murcia could still hold his event at the beach in Del Mar but says it’s more of a spring and summer gathering. Also, he points out that he doesn’t have many trucks to work with.

“With only nine trucks licensed, it’s tough to find a variety. I am used to picking from 25 different trucks for these events.”

The gathering’s location, in the Seagrove Park parking lot, is a commercially zoned site. Under a lease agreement with Seagrove Parking, LLC, the City of Del Mar received a percentage of the operating revenue from the weekly food-truck event, along with business-license fees and sales tax. But still, city officials are leery of the trucks.

Del Mar mayor Terry Sinnott says the trucks were a new occurrence in Del Mar that took the city by surprise. “We received some compliments and concerns,” he explains, “because it’s a new type of business. [The food trucks] started operating and no one knew what the guidelines were for that kind of mobile business. It raised red flags. That’s why the city said, ‘Okay let’s take a little time and properly put business permit rules together. So, that’s what we are doing.”

The new ordinance will address pedestrian safety concerns, moderate the days and hours of operation, along with noise, lighting, parking availability, trash, recycling, and restroom access at food-truck gatherings. The new regulations will require food-truck operators to obtain an operations license along with their business license.’ The city council is also looking into regulating other mobile vendors, including retail, video game, ice cream, and lunch trucks, along with push-carts.”

Under the California Vehicle Code, cities are allowed to regulate food trucks in the interest of public safety. But Murcia views Del Mar’s actions as a ban on food trucks and not an attempt, as the city claims, to address public safety issues. “They are grasping at straws,” he says, “[The City of Del Mar] can regulate food trucks, not ban them. So, right now they are saying the smell poses a hazard. When people walk past food trucks they comment on how good it smells, not the opposite. No study has been done to say [food trucks] are hurting businesses.” 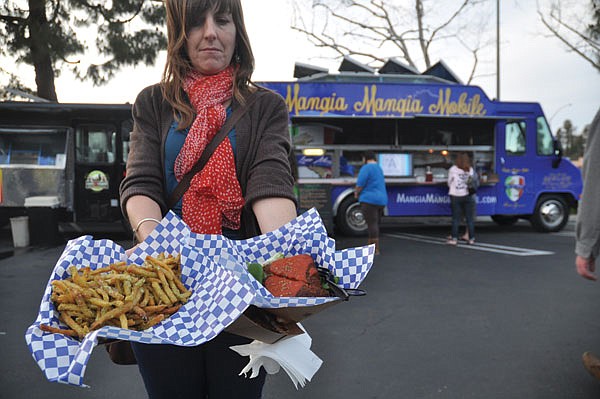 Food-truck owner Christian Murcia says the concerns of Del Mar restaurant owners are unfounded. “The closest restaurant is fine dining. We are attracting a different kind of client.”

Mayor Sinnott says, “The major concern is that it’s a brand-new way of doing business, at least from our perspective. [Del Mar] has never experienced food trucks. While we encourage them and want them to prosper, like any other business, we need to have a little breathing room to make sure that they are operating safely and in a way that is good for the public.”

Murcia was not surprised by Del Mar’s moratorium. Other cities have taken a similar stance on food trucks. He says that most Southern California cities that have banned food trucks have later changed their minds after realizing the benefits they present to communities. He points out that Long Beach, after banning the trucks, later rewrote their law to allow them back into their community. Recently, Murcia sent the Del Mar City Council a nationwide study on the benefits reaped by communities that host food-truck events.

“The consumers want the food trucks there,” he says. “It’s a shame [Del Mar’s city council] haven’t done their homework enough to know that it will help them. We have tried to explain to the city our benefits. They say [food trucks] will hurt [existing] businesses. That’s just not true. It’s not like we’re across the street from take-out restaurants. The closest restaurant is fine dining. We are attracting a different kind of client.”

Del Mar officials seem to be coming around to Murcia’s way of thinking. Says Mayor Sinnott, “We are hoping we can get this ordinance done rapidly and put in place so that [food-truck] owners can get back in Del Mar. Summer seems like a reasonable time to me. It shouldn’t take much longer than that.”

Murcia isn’t as optimistic. “It’s a small city. We can take our business elsewhere. I think there are potential benefits to the City of Del Mar to allow food trucks but it’s not worth it for us to fight such a small community. We are going to go where the business is. [Del Mar] is just going to miss out.”

What is with the City of Del Mar? I think the people there suffer from a severe case of having their head up their asterisk. I don't know if it's snobbery, or just plain skinflint greed.

What is with these Del Martians? Why must they constantly live in a state of altered reality? Maybe that's it--maybe what Del Martians really want is to have the rest of world live with reality...(all together now) "except for the City of Del Mar."

This is why the energy has moved from downtown Del Mar to downtown Encinitas.

The meter rates are .25cents for 3 minutes. We won't go back and I hear that from more and more people. Food trucks are new to them explains where their heads are at??????