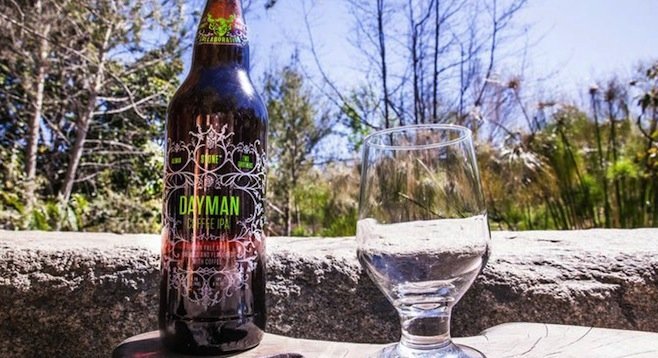 From 8 a.m. to 4:30 p.m. on weekdays, I can be found at a desk within the headquarters facility of Stone Brewing Co. (1999 Citracado Parkway, Escondido). That’s my day job and it’s something I’m very open about, as I realize the perceived conflict of interest mentioning my employer can conjure. Generally, I don’t write about Stone or its beers. Occasionally, however, there are brews or happenings that merit me deviating from my standard operating procedure. This latest Beer of the Week—a coffee IPA (yes, a COFFEE India pale ale)—is that kind of special.

The first of four collaboration beers Stone will release in 2013, it’s an outlandish style I’ve seen attempted only once before by a notoriously experimental brewer from Denmark, Mikkeller. Many drinkers applauded the ballsiness it took to attempt to harmoniously cram java and hops into a pint glass, but a much smaller number revered the finished product. Let’s come right out with it. One hears the words “coffee IPA” and their natural reaction is to raise an eyebrow and question the logic of such a combo. At least that’s what I did when, on my first day at Stone, they shared the upcoming arrival of this beer with me.

In the months leading up to the release, as I heard about its genesis (it was originally created by a trio of homebrewers going by the collective title “Aleman” for entry in a the 2012 Iron Brew Homebrew Competition, where it took first place) and heard the philosophy of using Cascade and Citra hops in tandem with light roast coffee (from Chicago’s dual brewing and coffee roasting company, Two Brothers) because all of those ingredients bring on tropical and citrus fruit notes, despite my many misgivings, it started to sound rather sensible. I, along with many of my hopeful yet skeptical co-workers, began to anticipate this strange brew.

I may never forget sipping my way through that first small taster glass of the beer. Before sampling it, I brought the glass to my nostrils and inhaled deeply. What hit me first was the scent of the coffee beans, but unlike a coffee porter or stout, there was a lot more going on, namely enhancing scents of evergreen and stone fruit. The flavor of the beer mirrored its aroma. The first thing to hit my palate was hops. An initial zing of mango and papaya faded rather quickly, leaving behind a faint bit of roast and a lingering bitterness. Rather than being a coffee-forward IPA, it’s an IPA accented with coffee and, as unbelievable as it may sound, it really works. The coffee adds a new, complementary flavor component while helping make the beer pleasantly dry and drinkable.

In addition to this being a fun, interesting, and tasty beer, part of the reason I felt compelled to share it with you is the fact it’s a one-time-only release that’s on shelves right now. Even if you only get one bottle to share with a large group, it’s something any IPA fan will at least want to take a sip of, and it would be a shame to miss that opportunity.

On a related note, Stone’s second collaboration beer of 2013 was determined two weekends ago at the company’s annual AHA Rally and Homebrew Competition event. Thirty San Diego County homebrewers entered their house-made concoctions (many of which incorporate unique ingredients and flavor combinations ranging far beyond commercially available beer varieties). Stone co-founders Greg Koch and Steve Wagner teamed with brewmaster Mitch Steele to taste them all. In the end, they awarded first place (and the opportunity to brew the winning beer on Stone’s large-scale system for national distribution) to Coconut IPA from Robert Masterson and Ryan Reschan of local homebrew club, the Society of Barley Engineers. That beer will be brewed in collaboration with the homebrewers gone pro at San Marcos brewery Rip Current Brewing Company. Look for it to hit shelves in summer.