Some know him as Wesley Crusher from Star Trek: The Next Generation. Others remember him as the kid who played the lead character in the hit ‘80’s film, Stand By Me. And a whole other contingent recognize him as the playfully menacing nemesis of Dr. Sheldon Cooper on the CBS sitcom, The Big Bang Theory. I’m talking about child actor turned Internet personality and hero to proud geeks everywhere, Wil Wheaton.

At this point, you’re probably saying, “What the hell does this guy have to do with beer?” Fair question. Certainly I never thought I’d be mentioning Ensign Crusher in the same breath as Stone Brewing Co., but San Diego’s largest craft brewing company has teamed up with the former phaser toter. Turns out, Wheaton’s not only a beer enthusiast (big deal, join the majority of Americans), but an avid homebrewer (I actually tasted a quartet of his house-made beers and can honestly say they tasted good and showed an understanding of styles, ingredients, and processes). Bonus, he's a legitimate Stone fanboy—dude was the company’s ten-thousandth e-newsletter subscriber. 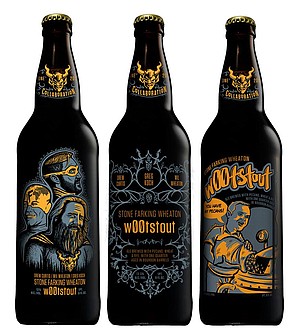 Over the years, Wheaton and Stone CEO Greg Koch have shared many a conversation about and over beer, looking for the chance to collaborate. That opportunity came earlier this year when Wheaton and his friend, Fark.com creator Drew Curtis, came to Stone’s Escondido production facility to help brew up an imperial stout made with wheat, rye, and pecans. A portion of that viscous, obsidian brew was then aged in Bourbon whiskey barrels before being blended into the unaged base beer. The monstrous yet smooth 13% ABV result will hit shelves next month under the name Drew Curtis/Wil Wheaton/Greg Koch Stone Farking Wheaton w00tstout. 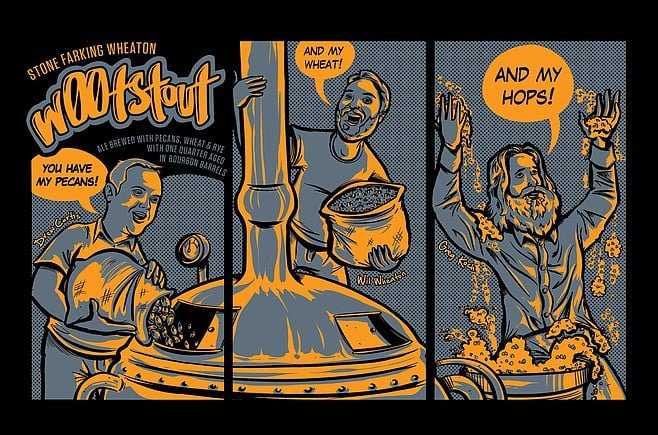 A comic that will serve as the label art for limited edition bottles being randomly distributed with regular bottles throughout the country.

The release will coincide with one of Wheaton’s favorite events, Comic-Con International. Each year, Wheaton drives down from his home in Los Angeles to attend Comic-Con and, also, to hold his self-established celebration of geekdom in all its forms—w00tstock: A Night of Geek and Music. This year, he’ll have two events drawing him to America’s Finest City at the height of tourist season, Comic-Con and Hop-Con: The w00tstout Launch Festival.

Another collaborative effort between Wheaton and Koch, Hop-Con is intended to bring regular geeks together with beer geeks. This intermingling of nth degree enthusiasts will take place at 5 p.m. on July 17 at the newly opened Stone Brewing World Bistro & Gardens – Liberty Station (2816 Historic Decatur Road, Point Loma). Wheaton will be on-hand (along with Koch and Curtis) to meet fans and quaff his collab along with some rarer Stone beers against a live music backdrop provided by Paul and Storm. In a day and age where beer events happen nearly every day, this is one that’s definitely outside the box and the scope of everyday beer fanaticism.