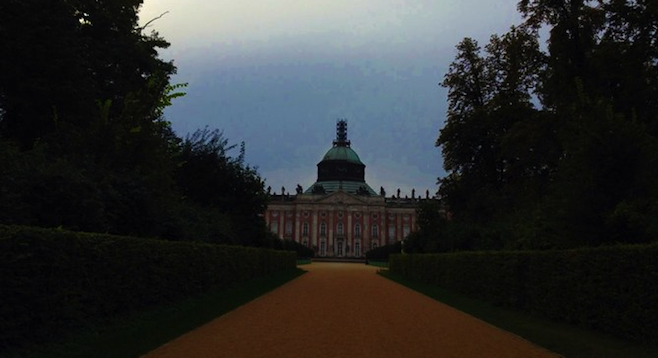 No worries in Potsdam

Germany's Versailles is an easy side trip from Berlin.

This was the response I received after a vendor asked me a question in German. Apparently, most American tourists forego 1,000-year-old Potsdam, Berlin's neighbor just 20 kilometers away.

However, the most famous King of Prussia, Frederick the Great, spent more time in Potsdam than in Berlin. This was because the aptly named Sanssouci summer residence is located in Potsdam (in French Sans souci means “no worries” or “carefree”). If Berlin’s Tiergarten was not enough of respite from the city rhythms, I highly suggest taking a 30-minute train ride to Potsdam.

Regional trains stop at all Berlin’s main stations, and the roundtrip ticket costs about $9 USD. The biking culture extends from Berlin into Potsdam, so be on the lookout for flyers at the Potsdam station that advertise bike rentals.

Being avid walkers, we decided to walk across the Lange Brücke bridge to the old market or “Alter Markt.” After seeing the highlight of this area, St. Nicholas Church, we grabbed a bite to eat and bought some food to snack on during a visit to Sanssouci Park.

Built in 1744, the elegant landscape of Sanssouci Park is an ensemble of palaces, gardens and fountains from various epochs. Interspersed among the lavish grounds are pathways to stroll among the sprawling greenery leading to various points of interest. I suggest to let the beauty and hidden corners of the park lead your day rather than determining a strict itinerary for your visit.

If aimlessly wandering the infinitesimal Sanssouci Park is not your preference, purchase a day pass for 14 Euros, which will give total access to enter all 30 palaces and museums.

Some charming constructions that we bumped into during our walk were the Chinese tea house, Orangery Palace, the Dragon house, Caputh Palace, a Dutch windmill and the Roman Baths. Also, we came across the first independent museum building of Germany, a picture gallery created during 1755-1763 housing prominent artists, such as my favorite – Caravaggio.

But a visit to Sanssouci Park would not be complete if one does not at least visit both the ornate Sanssouci Palace and the Neues Palais (“New Palace”). One has to stand so far within the gardens that extend from the obelisk to the Neues Palais in order to capture in a single photo the sheer enormity of the Neues Palais, with 450 statues outlining its perimeter. Frederick the Great had the impressive baroque structure built after the Seven Years’ War to glorify Prussia’s status of power.

Among the lush vegetation surrounding Sanssouci Palace is also the grave of Frederick the Great. Some visitors place potatoes on his tombstone since this king popularized potatoes as the staple crop of Germany.

Despite the breathtaking edifices, nature beckons your attention. A lot of the park’s features are in their original form, such as the grand vineyard arbors and the oak trees that are almost two centuries old. In the 19th century, more gardens were added, including the Charlottenhof, the Marly Garden, the Nordic Garden and the Sicilian Garden.

Winding down our carefree day, we proceeded to the Dutch quarter and, encompassed by more interesting architecture, enjoyed some beers from one of the many pubs and restaurants of the area.

We were there in May. Pretty nice. Lots of classic horse chestnut trees in full bloom.

Thank you for mentioning the horse chestnut trees. I was born and lived in Germany many years ago and will never forget these shade-giving trees with their large long leaves. In my days, outdoor beer gardens were frequent places where these trees gave the guests some shade from the summer sun. Not to forget the Pilsner beer. And, as a child, it was great fun to take the chestnuts out of their thorny green shells. We found out really quick that these are not food; too bitter. 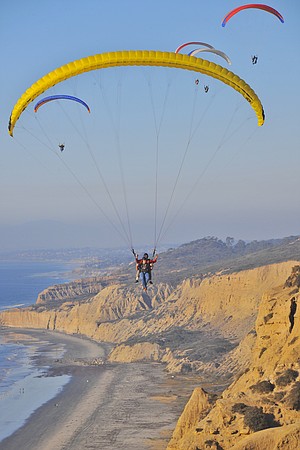 Paragliding at the Torrey Pines Gliderport. The most terrifying experience of my life.