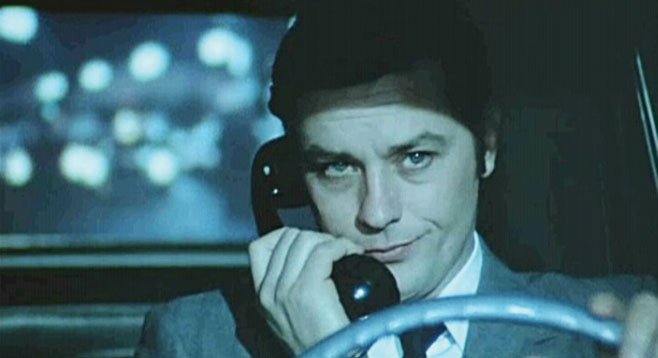 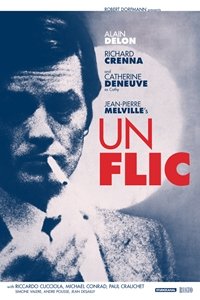 Jean-Pierre Grumbach’s (Melville was the French filmmaker’s nom de guerre, appropriated in honor of his literary correlate, Herman) acutely minimalist take on American gangster films resulted in a formal probity unlike anything cinema has experienced before or since.

Like his contemporary Sergio Leone, Melville, in a short span of time and over the course of a relatively small number of films (Leone signed 7; Melville, 13) managed almost miraculously to craft an undeniably unique cinematic vocabulary.

The 1972 crime flick Un Flic would be Melville’s final contemplation of the genre he embraced. Both the reason for the opening heist and the rationale behind a seemingly well-heeled cabaret owner (Richard Crenna) acting as criminal mastermind remain as shadowy as the four figures seated in a black sedan parked opposite the bank, silently waiting to make their move.

Cue the rain. A drenched windshield masks the identity of the car’s occupants. Hat brims are jerked down immediately upon exiting the getaway vehicle to further shield the rogues from the elements — and anyone within 20 yards capable of providing the cops with a positive I.D.

Melville wisely sidesteps the planning portion of the initial heist, opting instead to open on action. Alain Delon is the cop assigned to the case, a world-weary dick possessed with enough moxie to sit with his back facing the door in a crowded restaurant. He shares two things with his target: career fatigue and a whore named Cathy (played by a ravishing Catherine Deneuve).

The story unfolds in furtive glances and artful gestures, the camera moving only when it needs to follow the action. Dialogue is kept to a minimum: Delon’s partner is assigned little more to say than “Car 8, I’ll hand you over,” before giving the receiver to his better half.

There is one room-temperature crack in Melville’s icy veneer. The loot nabbed in the opening robbery is used to act as seed-money for a second and even more elaborate sting. The criminals appear to be working off a bigger budget than the filmmaker. When it comes to dramatizing stickup #2, the effects budget can barely eke out the coinage needed to purchase a remote-control helicopter and Lionel train set. With the sub-Toho special effects being what they are, one half-expects Godzilla’s paw to come crashing down and finish Delon’s job for him.

Was the climactic train heist Melville’s way of keeping abreast of the popular run of espionage pictures dotting the cinematic landscape at the time of its release? Is it me, or does the beefy, pasty-faced blonde drug mule bear more than a passing resemblance to Dr. No’s Robert Shaw?

The final blast of action plays out in the name of love. Not between characters, but from the director to a genre he spent a lifetime refining. Starting Friday, you will have exactly one week to see restored 35mm prints of Un Flic and Jean-Luc Godard’s equally masterful thriller, Un Petite Soldat, at Landmark’s Ken Cinema. The time has come to put down your remotes and work for your art.

Those less willing to put down their remotes can find Un Flic on Netflix (instantly, even) under the name Dirty Money. If this film fails to impress, check out Melville in top form: Le Samourai, Le Deuxième Souffle and Le Doulos.

When there are restored 35mm prints playing town why point people in the direction of their televisions? Are you with me or against me?

First, because not everyone in the Reader audience (including me) lives in the San Diego area, and second, because it's empowering to inform people about their options and to let them decide what works best for them.

Any port in a storm, I guess. I hope that they eventually play a theatre near you. They look sensational on the big screen.

"one half-expects Godzilla’s paw to come crashing down and finish Delon’s job for him." Doesn't Godzilla prefer Jean-Paul Belmondo? Ah Hell, give me Gamara, that rocket-powered giant turtle knew to call for back-up when he's confronted by armed thugs!

But on a more academic note, does "Army of Shadows" seem like his filmography's rosetta stone to anyone? I watched "Le Deuxieme Souffle" and it felt a little cold and had an impressive preoccupation with the time spent hiding and a lot of details obsessed over or altogether subtracted. Kind of a daunting first encounter with his films. Then after watching Shadows it made sense.