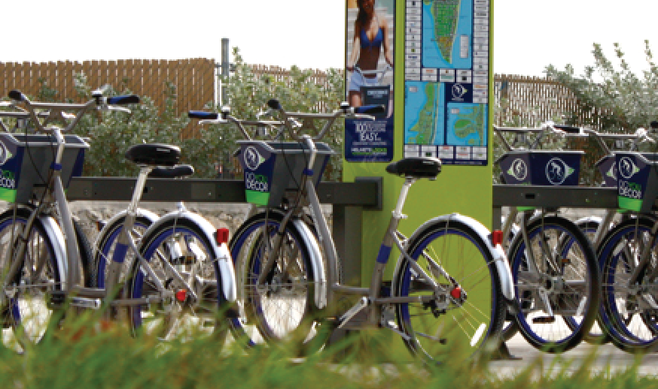 Decobike to be in business here in 2014

Decobike has won a contract with the City of San Diego to put 180 solar-powered kiosk locations around the city for the first-ever bike-sharing program here, according to Andy Hanshaw of the San Diego County Bicycling Coalition.

The company already operates similar programs in Long Beach, New York, and three cities in Florida. The model for the enterprise has been used for many years in Paris and Barcelona.

Many details still need to be worked out for the approximately 1800 bikes and their locations, said Hanshaw, but the program will be implemented in the first quarter of 2014.

The bikes will be available for rent by the hour for about $8 (with the first 30 minutes free), or one can opt to buy a monthly membership for about $23 a month.

The multispeed bikes are a design exclusive to Decobike and can withstand the elements, as the kiosks are out in the open. They will be maintained and repaired by a staff of about 70 employees, who will be hired to work at a central location.

Once implemented, users will be able to find locations of the kiosks on the Decobike website, but most users will likely download an app for their smartphone that will show where the kiosks are located. In addition to the app, there will be route directions signage posted. The kiosks will also incorporate multilanguage menus.

The bikes will have electronic tracking devices in case they are stolen or not returned within the designated time frame. The Decobike website states it will cost the user $800 for a lost, stolen, or non-returned bike.

Is that an actual photo? Those are some weird-looking contraptions, with the bottom bracket apparently mounted several inches above the bottom of the frame, BMX handlebars, and (about 20 years after the advent of the a-headset) a gooseneck stem?