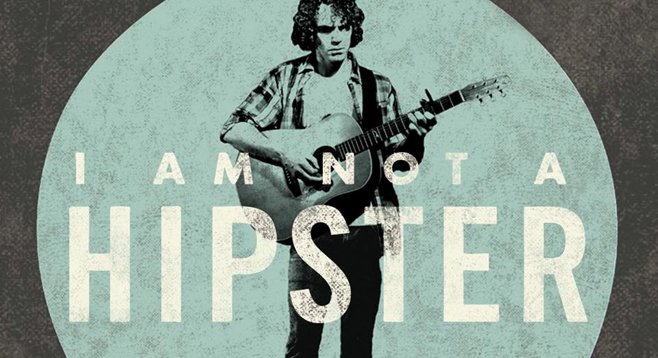 No hipsters, no canines

“We opened in 10 cities,” says Ron Najor. “We did a one-week run in L.A. It’s still playing in theaters in Seattle and Michigan.” He’s on the phone from his home in El Cajon to talk about a film he produced titled I Am Not a Hipster.

But the big news (aside from being screened at Sundance as part of that festival’s official selection), says Najor, is that the film has just been released digitally, on Blu-ray and DVD, and on Cox, Time Warner, Verizon, and Comcast cable. “It’s all over the country now. It’s in 50 million homes.”

Written, directed, and coproduced by Destin Daniel Cretton, I Am Not a Hipster, as Najor explains it, is about “A singer/songwriter moves to San Diego from Ohio [and] writes an indie rock album. He releases it. He becomes a phenomenon in the San Diego music scene.” The movie screened January 10 at the Ken Cinema in Kensington to an audience of over 200 people.

“It’s been a roller coaster ride. It’s been really hard.” Then, in the same breath, Najor says, “It’s been really great.” Production began in June of 2011 after another project that he and Cretton had been considering fell apart. The two raised some of the nearly $100,000 production budget on Kickstarter.

“There’s references all over to San Diego,” he says of the final cut. The bulk of the movie was filmed here, with the Casbah as one of the locations. Najor recalls being nervous about asking owner Tim Mays for the use of his venue. “Destin went over and talked to him about shooting there. Mays was sitting at a desk working. ‘Film school, huh?’ Mays said. ‘I went to SDSU. Okay, you can shoot here. Let me know what dates.’ And then Mays just walked out and disappeared. Destin couldn’t find him. Later, when I asked if we had the location, Destin said, ‘Yeah, like, I think we do.’”

Najor, who was born in Detroit, went to film school at San Diego State University. That’s where he met Cretton, a Point Loma Nazarene grad.

“Dominic [Bogart], our lead actor, actually sang all of those songs in the film.” Naturally, being a story about a musician, there’s an accompanying soundtrack. But Najor says it was prereleased as a band called Canines — “this kind of fabricated band.” Even though there is no actual Canines, Najor says the CD is “selling pretty well.” The disc also includes tracks from San Diego artists the Donkeys, the Tree Ring, John Meeks, Keith Sweaty, Joel P. West, Pebaluna, Cuckoo Chaos, and Black Mamba.

Will the producers make any coin from the venture? “If everybody buys a copy, yeah, we’ll make money,” Najor says. “If they don’t, no.”