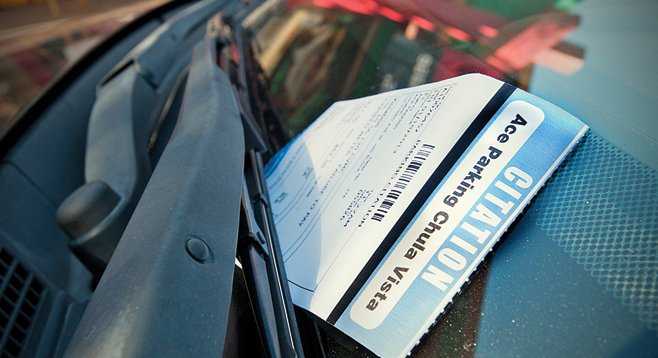 Should you pay that ticket issued by Ace Parking?

Duy Nguyen stared at the parking ticket that had been placed under his windshield wiper. Something didn’t seem right about it. The $37.50 ticket (for parking at an expired meter) listed a post office box number in Inglewood, California. The officer’s identification number was 12345. The citation was from “Ace Parking — Chula Vista Parking Enforcement Center.”

“I thought it was a scam at first,” says Nguyen in a January 11 email. “I called the Chula Vista Police Department, and the officer that I talked to said that the ticket was legitimate, and that the registration could be withheld by the DMV if I didn’t pay. I asked about the legality of the ticket and got an annoyed response from the officer.”

Nguyen now wonders if he should even pay the ticket. “A lawyer friend of mine said that there probably wouldn’t be any repercussions if I don’t pay it, since the payment would go to Ace Parking, not the city.”

But the ticket wasn’t a scam, at least not within Chula Vista city limits. Since 2009, the city has contracted with Ace Parking “to provide enforcement and maintenance in the City of Chula Vista Downtown Parking District,” says a city spokesperson. 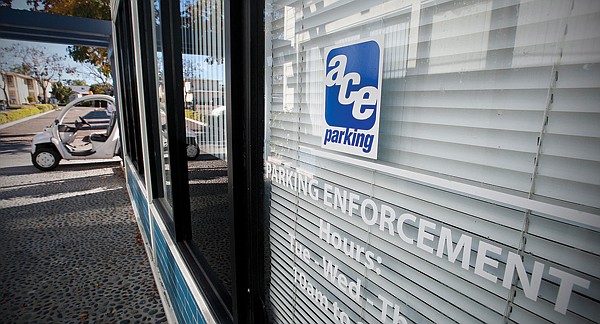 According to their agreement, Ace employees are responsible for enforcing the following violations: “non-payment of parking meters, parking at an expired meter, improper parking in a parking stall, backing into a stall, and parking over the time limit (for signed parking).”

To do so, the company employs one full-time enforcement officer, one part-time collections and maintenance person, and a supervisor. All are based in a storefront on Third Avenue, where appeals and payments can be made.

The company’s owner is Scott Jones, who took over the business from his father, Evan Jones. Scott’s son, Keith Burnham Jones, is the company’s top executive. During their 70 years in business, the Jones family has been awarded multimillion-dollar contracts from public agencies throughout San Diego County.

Ace’s presence at public parking lots, influence with local politicians, and its parking-enforcement activities have raised some concerns about privatization of governmental duties. “It feels wrong to get the ticket,” says Nguyen, “because I don’t like the idea of private companies handing out citations like they’re public authorities. I don’t think most people would.”

The debate over privatization isn’t the only issue. Program revenues have fallen short of initial projections. In its original proposal to the city, Ace estimated that by the third year of the contract the city would collect $623,745 in total revenue; in fiscal year 2012, the company fell $46,969 short of projections.

Expenditures were also higher than expected. Last fiscal year, the city paid Ace $195,000 a year to run the parking operation in downtown; that amount is more than $61,000 higher than what the company promised.

“No specific authority,” Harris wrote, “has been given to cities to have the employees of private companies issue parking citations.” She added, “We conclude that a general law city may not enter into a contract with a private security company authorizing the company’s employees to issue citations for Vehicle Code parking violations.”

But Chula Vista, like San Diego, is not a general law city. It’s a charter city responsible for drafting its own laws. In October 2009, Chula Vista did just that when it amended the municipal code to allow the arrangement.

“When the City Council approved the Ace contract in 2009, the City Attorney’s office advised them that while the law in this area was not clear, an argument could be made that because the City was a charter city, and it was enforcing its own municipal code, the city could lawfully contract with a third party vendor to issue parking citations,” reads a statement from city attorney Glenn Googins. “Chula Vista Municipal Code was modified at that time to expressly provide for this type of arrangement.”

The pertinent section of the code states: “The City Council may contract with the governing body of a city or county within this state, or with a state department or other public or private agency for the preparation or conducting of examinations for positions in the City service or for the performance of any other personnel administration service.”

To the concern that laws are being enforced by private employees, not sworn officers, a city spokesperson responds that all parking officers are fully vetted before being hired. “All Ace employees are required to go through both Ace’s background checks and an extensive city background check through our Police Department.”

That doesn’t comfort opponents such as Nguyen, who contends, “We have police officers for a reason. I realize that cities are strapped for cash right now, but privatizing law enforcement seems like a stupid idea.”

Representatives from Ace Parking declined to comment for this story. ■

A good lawyer should be able to get the ticket squashed easily. Chula Vista's Muni code reads, "...the City can contract with....for the preparation or conducting of exams in the City service or for the performance of any other personnel administration service.”

Actually, the legal word is quashed (not squashed). Ifyou step on the ticket to "squash" it, will not do any good. ;-)

Nguyen contends, “We have police officers for a reason. I realize that cities are strapped for cash right now, but privatizing law enforcement seems like a stupid idea.” Okay, but isn't this a separate issue from debating paying the fine for parking at an expired meter?

The city of San Diego uses meter-reader personnel, as opposed to police officers, for monitoring/enforcing parking. This would seemingly make sense; the skill level to evaluate a meter for being expired and writing a citation for vehicles parked at expired meters is significantly less than that required for being a police officer, the city comes out ahead by collecting parking violation revenue and paying less for monitoring/enforcement personnel.

Nguyen, if you were parked illegally then pay the fine, if you believe you were parked legally then fight the charges. Your questioning of the intelligence of parking monitoring/enforcement by non-police is a separate issue and should be addressed as such.

Sounds like you need to re read the story. ACE parking is profiting of writing parking citation for the city. Making revenue projections on "tickets" they plan to issue and collect on in what is at best a highly questionable practice that can be seen as a form of quota seeking parking enforcement. Lets bring on the class action suit.

Interesting story. Seems like paying an expensive company like Ace works against the city in more than one way. Downtown Chula Vista is struggling to survive as it is.

Great story... Does this company operate anywhere without scandal and or broken promises? One of the regions most questionable operations owned and operated by flawed characters of the highest order. A real danger to your wallet in the name of FAMILY GREED.

Can you say CLASS ACTION LAWSUIT? That what these ticket seem to be adding up to.

The legal word might be quashed, but back in the neighborhood where I grew up, when you wanted to put a stop to things, you had them squashed. Nothing legal about it, but it was very effective.

  Correction: The article gives the wrong section of the Municipal Code. I apologize for the error. Here is the correct section that City Attorney provided in his email:

Section 10.62.010.B of the Chula Vista Municipal Code was also modified at that time to expressly provide for this type of arrangement: 10.62.010 Parking enforcement – Authorized agents. A. Every police officer and every City employee, and every volunteer (designated by the Chief of Police) charged with enforcement of the provisions of Chapters 10.52, 10.56 and 10.60 CVMC relating to illegal parking and time limitations in parking meter zones, the provisions of the California Vehicle Code, and the other laws of the state applicable to parking violations within the City, shall have the duty, when any vehicle is illegally parked, to issue written notice of violation thereof stating the state vehicle license number, make of such vehicle, the time and date of such illegal parking, meter number, street location, and a reference to the appropriate section of the code and the amount of the penalty for the violation.

LAZ Parking seems to be the same ol' tune with a different juke box number. I got a $39 ticket for parking in Cafe Coyote's underground parking facility while I ate at Cafe Coyote. On top of being a private company writing the ticket, this is private property. I imagine they are acting as an agent of the owner, so it is no different than if a bus boy or cook came down and wrote me the ticket (No Parking Zone - the paint was worn out and only a very close inspection revealed the shadow-remains of "NO". Otherwise, it said simply, "Parking"). I have had the ticket and accompanying envelope on the coffee table next to my chair for about a month now, suspiciously eyeballing the stress-inducing paperwork each time I sat down to watch TV. This morning I had time to do the research . . . . WHAT A SCAM! This would be the same as if I were to write "You owe me $39" on a piece of scrap paper from the garage when you park in my driveway uninvited, slip the paper under your wiper and tell you that not paying up could jeopardize your vehicle registration, ability to sell your vehicle, ever again park on my street and your dog would get sick and die within the month, your cat within a week and your canary immediately. What a truck load full of manure! My ticket will now - obviously - go unpaid. In addition, even though Cafe Coyote is a great place to take visitors from out of town, they will never see my face, or guests, nor our money $$$, ever again. As a retired (28 years) El Cajon peace officer, my opinion is that this enforcement privatization not only serves to undermine the authority and jobs of trained and responsible parking enforcement personnel, who are sworn employees, but it also smacks of vigilantism, misrepresentation and I sure as hell am not paying mine. Furthermore, (my personal opinion, which I think is firmly based on available law and what I think a judge would have to say), I would advise anyone getting a private parking ticket on private property to NOT recognize the cite as being issued by valid authority. I never knew underhanded stuff like this went on and it saddens me. The cities of San Diego and Chula Vista should be ashamed of themselves! I am really surprised the lawsuits aren't piling up on LAZ Parking's doorstep. The only reason I am not shredding my cite? I'm holding onto it for the class action!

I got the same laz parking notice like you yesterday. The time was just around I left my car. I don't know if I need to pay it to clear my conscience.

Look at his nose (Scott Jones): Need I say anymore? 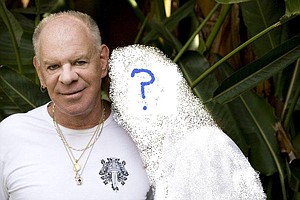