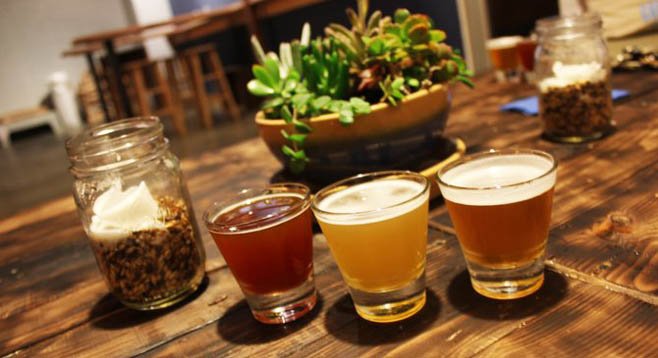 When I originally wrote about Groundswell Brewing Company (6304 Riverdale Street, Grantville), it was in the very early start-up stages. Owner Kevin Rhodes and his crew had their location, a storefront almost perfectly equidistant to Grantville’s other two brewing operations — Benchmark Brewing Company and San Diego Brewing Company — but little else. But in the last five months, equipment has been purchased, initial recipes have been worked out, the tasting room has been outfitted with a bar and furniture, and the business is now in the very early soft-open stages. 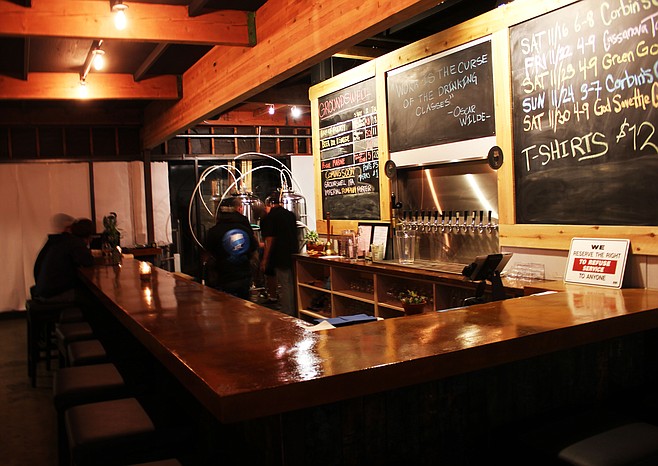 After meeting with Groundswell’s brew crew and tasting one of its beers at San Diego Beer Week’s San Diego Brewers Guild Festival, I was inspired to make a trip to get another early taste. What I found was that, while both the space and the beers are works-in-progress, they’re off to nice, humble starts.

Though working with a very small venue, Rhodes and company have put a lot of elbow grease into what used to be an embattled marijuana dispensary. They've done away with god-awful fluorescent green and brown walls that probably seemed like a great idea after a few bong hits and repainted the entire place. A rail bar now lines the windows at the front of the building, and L-shaped couches and wooden tables have been installed in each corner. The bar looks good, too, but it’s the little touches that make this one of the most comfy tasting spaces I’ve come across in some time. Instead of going cheap, Groundswell purchased expensive barstools that are larger than most, four-legged, and incredibly cushy. Then there’s the logo-adorned throw pillows on the couches, which look good and feel better tucked behind one’s back. 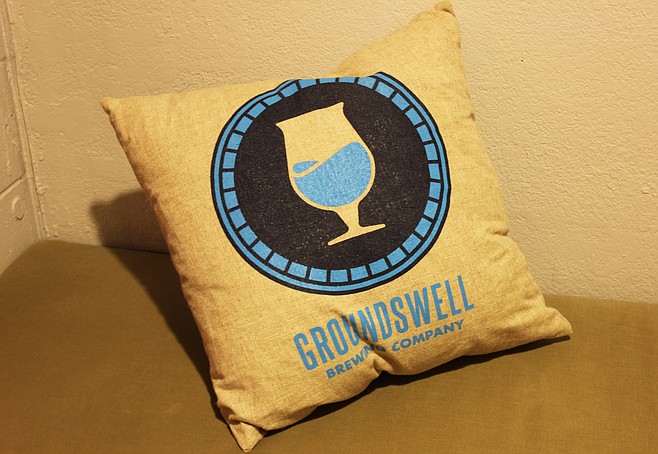 Because the place has only been open since the beginning of November, there were only three beers on the chalkboard. The first I sampled was a Bavarian hefeweizen called Bier Der Könige. It was thirst-quenching and lightly creamy with a slight sweetness and solid clove spiciness. Next was Bay of Plenty, an unimposing blonde brewed with New Zealand hops that could probably stand to be a bit more imposing. Last up was the beer that got me there in the first place, a hybrid of an English-style bitter and an Irish-style red ale. Semisweet with nary a hint of hop, I think it’s something of a malt lover’s dream, though others in my party found it unimpressive.

It will be interesting to see how Groundswell progresses, but if nothing else, it’s nice to see a new business with limited resources investing in an inviting setting where visitors can sit back and watch the business forge ahead.

NIce guys there. How about a story on how certain breweries have welcomed the new growler laws even prior to the passing and how others choose to ignore them (your employer Stone for instance).