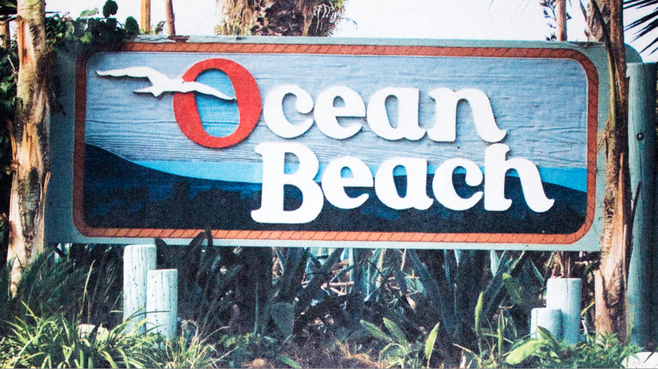 They want it to be the same

There must be something special about that soaring seagull and that great big red letter O, which, like much of the community of Ocean Beach, leans to the left.

The results of a long-awaited vote are in, and it turns out few could bear the thought of revamping, renewing, or updating in any way the blueprint of the entryway sign that greets southbound traffic heading into Ocean Beach on Sunset Cliffs Boulevard. After nearly a year of discussion, eligible members of the Ocean Beach Town Council have overwhelmingly decided to stay with the familiar, and keep the sign the way it is.

Nearly 58 percent of voters preferred the design that has been in place since the town council put up the sign in 1984; that’s more than three times the support of the option that came in second, a design virtually identical but for the addition of two parrots.

In all, 76 people — roughly 52 percent of the amount eligible to vote — spread their votes among the five designs in an email vote conducted April 1–8. To be eligible, voters were required to have their $20 annual dues paid up as of March 30 and live in the 92107 zip code. Results were released at the town council’s monthly meeting on April 24.

After nearly three decades of sun, ocean air, termites, and rot, the decision was made last year to replace the sign and a request help from the community, which generated 20 designs. By year's end, that total was whittled down to 4 plus the original design. The 5 finalists were posted on the town-council website for several months before being taken down last week.

“I think having the designs available on our website for several months gave everyone in Ocean Beach the opportunity to review and comment on their preferences,” town-council president Dave Martin said in an email. “It also served to offer guidance to our members in voting for the most popular option. It was overwhelmingly obvious the most folks wished to maintain OB’s identity as it is.”

To generate interest in the vote, the sign was covered up with a tarp that had a red question mark and the town-council web address on it. The tactic worked — in March, membership enjoyed its largest ever one-month spike.

Now comes the hard part — raising the estimated $10,000 to construct and install it — triple what it cost for the old sign, said Jim Musgrove, who chairs the council's Community Enhancement Committee.

The project has already benefited from this bit of good news: the upright posts holding the sign are in good shape. Not only does that save money — replacing the posts would have triggered a requirement to reapply for permits, Musgrove said.

Could we see photos of the other options?