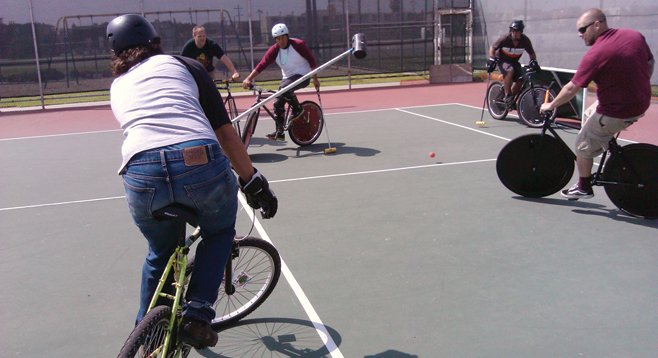 ‘I’ve never heard of bike polo.” Breaking a smile, I add, “You must get that a lot.”

“Yeah. My understanding is that it’s been around for a long time. It was an Olympic demonstration sport in the early 1900s.”

On the phone is Charles Norton, 27, a Vista lad, California College San Diego alumnus, Souplantation employee, and bike-polo convert. One wants to know how his bike polo came to be.

Norton says, “I came across the club playing at the Adams Avenue park on 35th. It was, like, ‘Wow, what are these guys doing?’ As soon as I saw the action and how it was played, I wanted to play. I wanted to get in on it. Since then, I’ve been playing and I can’t get enough. It’s absolutely the most fun I’ve ever had on a bike, and I’ve been riding a bike since I was four.”

I mention that I’d done brief research into bike polo and like the unorganized, quasi-outlaw quality of it.

“I don’t want to say we’re a bunch of hooligans, but we do have our own culture. We don’t discourage anyone from coming out just because they have a certain lifestyle. It’s all in good fun. We normally play at Golden Hill’s rec center every Wednesday. That’s our main spot. We’re exploring the Santa Clara Recreation Center out in Mission Beach, and Linda Vista.

“We meet twice a week. I host a barbecue on Wednesday. The guys show up around 6:00, 6:30, and I have hot dogs, cheddar links, beef brats, make it a simple, quick barbecue before we play. Boosts morale and gives us a chance to talk. Over a dozen guys show up consistently.”

I ask, “Are their positions in bike polo or do you just saddle up and get to it?”

“It’s teams of three on three, usually one man in the goal.”

Norton says, “You want to develop good ball handling and be good at passing. There’s a bottom bracket shot. It’s kind of a trick shot. If you’re right handed you steer with your left, hold your mallet in your right hand, and approach the goal with the goal on your left side. You shoot the ball from the right side of your bicycle, between its wheels, and at the goal.”

I say, “I’ve read there are 177 bicycle-polo clubs in the United States. With that many clubs, there has got to be some who are semi-pro, with the uniforms, the gear, the whole razzle-dazzle. Do you ever play those clubs?”

“It’s all player-organized and -coordinated. We all have our own playing levels. If you want to play, just play. We play it by ear and see what we can get going.”

“What are typical injuries in bike polo?”

Norton says, “One of the things that does worry me is somebody doing a high stick and catching a mallet to the face. I’ve had it happen two times. I’ve started wearing a helmet since then. Some of the players do wear helmets and full-face masks, like you would in hockey.”

“How about the ordinary, everyday injuries that you would get in any kind of a vigorous sport — sprained ankles, busted fingers, and the like?”

“I tore a muscle in my shoulder, over-steered and tried to control the bike without letting it go to ground. I scraped my shin really bad. Pedal hit my shin and then slid up my shin. Very typical.”

I ask, “Where would you like San Diego bike polo to be a year from now?”

“I’d like to see our club size at least double and for us to host another tournament.”

“I’m assuming you say, ‘Hey, we’re putting on a tournament,’ and who comes comes. You guys don’t have a president, treasurer, any of that stuff, do you?”

Norton laughs, “Oh, no, not at all. We have senior players who have a greater influence on the other players as far as style of play, what’s fair, and what’s not fair, as far as our rules go. Our games are not organized matches where we’re going to have a set team. We call it a pick-up game; we’re playing, we’re practicing, we’re testing each other’s limits and skills.

“It is unorganized — it’s really unorganized — we don’t have a hierarchy. We do have our loyal players who come out every week, twice a week. And some of our guys are very good. One of our guys can scoop the ball up on his mallet and balance it, not using anything else. We’ve had players who went to the world championships.”

Interested readers can check the club’s Facebook page or drop by the Golden Hill Recreation Center on Wednesday night.