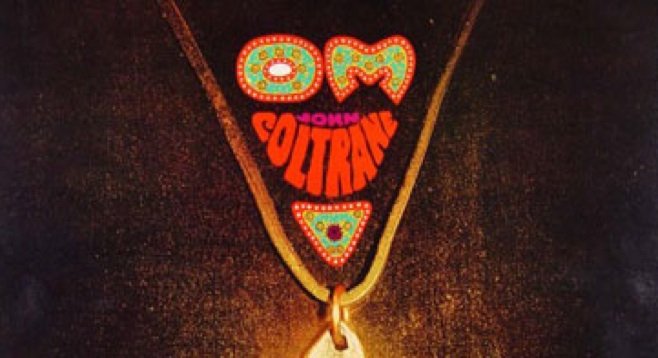 “It’s very short, as I recall,” said the resident jazz expert in my life, about McCoy Tyner’s piano solo in this half-hour spiritual yearning — recorded in 1965 but not released until 1968, a year after the leader’s death. But I spun this reissue several times to find that Tyner not only goes on at some length, but furnishes the release after many intense minutes of striving. Coltrane wanted more horns at this point, and he got them, most notably acolyte Pharaoh Sanders.

Om’s courses include classic free spontaneous-counterpoint all-hands-on-deck honking, especially right after that Bhagavad Gita at the starting line — but for the through line, study Pharaoh first. His noise, certainly, but more to the point the changing shapes of Pharaoh’s noise. A recently released ESP-Disk set of early Pharaoh stresses how even in his youth, he was not only working the line between skronk and “conventional” lyricism, but trying to introduce the two over that line. This allows a deeper reading of his choices and contextualizes his slow shift to more flowing sounds, especially after Coltrane left him and everyone else.

So Pharaoh pushes and steams and stains and sweats, and then Tyner (not fond of the “new thing,” one foot out the door already), comes in with the blessing. The enlightenment. The cool cloth to the sweaty brow. And everyone else save the rhythm drops out, allows it, because they know what they’ve got. And that there, to borrow a line from another (occasionally) Good Book, is wisdom.