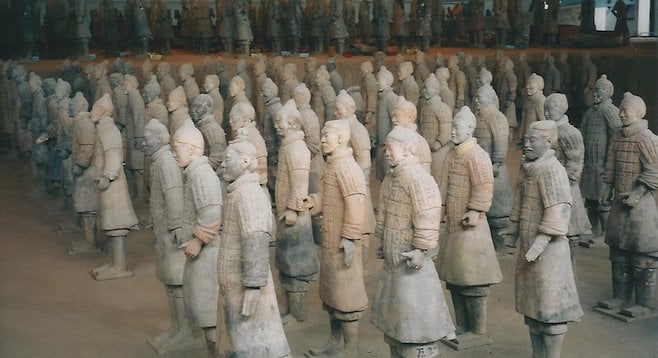 Once in a great while, the simplest of acts, even performed inadvertently, can have far-reaching effects.

In Xi'an, China, there is a massive army that has stood in silent formation for more than two-and-a-half thousand years.

The man responsible for this enormous feat is Emperor Qin, and the modern state of China claims its name from him. To assure himself passage into the next life he hired artisans, commanding them to create a life-size clay duplicate of every soldier in his service. As each statue was finished, it was fired in a kiln, painted and mounted in a giant pit, in formation as if on a battlefield. The emperor created a fictional army to guide him to the next life.

Qin died at the age of 50. The next Emperor ordered all of Qin's concubines who had not born him children put to death, along with the thousands of artisans who created this wonder to assure it remained a secret.

For 2,400 years, the army stood silent and unknown, covered in its tomb until 1974, when a poor farmer named Yang Jun Peng dug a water well for his village. Breaking into a dark cavern, he found pieces of metal and shards of terra cotta. At first, disgusted at not finding water, he tossed the pieces away. A village elder realized their importance and notified local authorities.

Four months later, a massive excavation began. No one was prepared for what they would find.

After countless earthquakes, floods and a fire, most of the army was in small pieces. Still, the size of the discovery dictated a massive effort on the government's part. Museum curators and restorers began assembling the world's largest jigsaw puzzle.

By 1979, more than 1,000 warriors had been reassembled, plus 300 horses and dozens of chariots. A massive museum complex was constructed to house the army and its restoration. In 1987, UNESCO declared the area a World Heritage Site.

Most of the warriors are over six feet tall. The detail is astonishing. Each piece of armor is articulated:

Mustaches, beards, hairstyles, even fingernails are rendered with exacting craftsmanship. Archers wear silk scarves to swivel their necks without rubbing them raw on leather gauntlets. Boot soles have ripples. Thongs wrap around leggings so they won't catch the brush while marching. Hair is tied to one side, allowing a clear draw of an arrow from back quivers. Horsemen have spurs and infantrymen wear body armor. Horses wear blinders to keep them moving forward. If a piece of equipment existed in the actual army, it was faithfully recreated.

Row after row stands in silent formation waiting for orders. Every statue is unique. Each is the death mask of its owner. No one speaks here – partly out of reverence, but even more, it is the unconscious longing to hear the order for battle to be called. At any moment the march will begin.

In 2002 the army numbered 7,000, along with several hundred horses. Ground-piercing radar has detected shards still underground that, when finally excavated, will produce an army in excess of 100,000 soldiers. 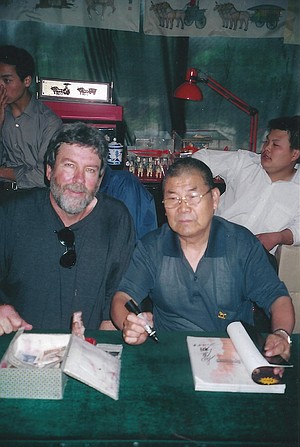 the author and Mr. Peng

My wife and I spent a day with the army, and at the time it was not jammed with tourists as it is today. One of the few other visitors was a tiny man wandering among the aisles by himself with a smile on his face.

When my wife and I left, this same man was sitting at a table by the exit. He smiled at all that passed him but was not being acknowledged. At first I thought he might be a guard, but then his image popped into my mind.

I had seen him in books. It was Mr. Yang Jun Peng, the discoverer of the site that has become China's single largest tourist attraction. Most of the visitors walked right by without realizing they were passing a man who had been declared a living national treasure. His job was to sign books and pose for photos, but that day none of his countrymen recognized him. Wandering among his discovery he seemed a happy man, but here, overlooked by all the visitors, he seemed alone and sad.

He lit up when I approached, and since I am large, this attracted a crowd. We shared no common language, but I smiled and bowed. He put his arm around me and my wife snapped our photo together. I had given him great face, and now people began to murmur his name. He smiled broadly at the recognition and began to sign books for his admirers as we slipped out the door behind him after offering a final bow.

There was a brilliant sunset outside, and for a moment, I thought I could hear the commander calling his troops to arms.

A statue of Emperor Qin is outside the San Diego Chinese Historical Museum Extension. http://local.sandiego.com/history/discover-san-diego-s-chinese-museum 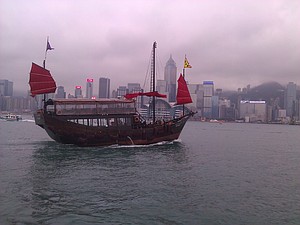