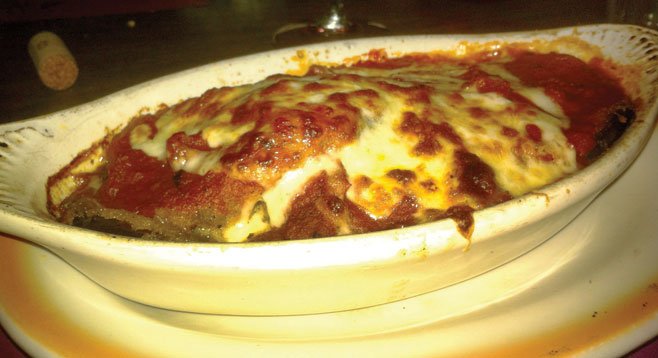 The first North Park Little League team meeting of the new season had ended at Morley Field, and we were starving.

“Mom! Tonight’s the fundraiser for my school at Paesano’s. Can we go there?”

I fumbled around in the bottom of my purse and grabbed the crumpled purple flyer I’d found in my son’s backpack announcing said fundraiser.

Entering the restaurant felt like a journey back in time to our childhoods; Paesano Fine Italian Food opened in 1967, and the decor doesn’t seem to have been altered much since. There are two dimly lit dining rooms. In the front room, brown booths line the wall opposite the open kitchen and bar; both rooms have Formica-topped tables and metal chairs. Kitschy light fixtures — such as a cluster of fading glass grapes in one corner — and the cheery red candleholders squatting on each table make for an intimate dining experience.

The place was packed, and not only with the elementary-school crowd. All sorts of folks from the neighborhood were there — grandparents sharing a glass of wine with friends; middle-aged couples all dressed up and out on a date; hipsters enjoying a Mission Brewery Shipwrecked Double IPA and plates piled with pasta. Kids ran around, visiting and laughing. Again, we felt as if we’d wandered into an Americana time warp. Paesano reminds me of a place in Los Angeles my parents used to take me to, La Barbera’s, which was loud, joyous, and friendly, the sort of place where after two visits you are a regular: we were charmed before we’d taken a bite.

In a recent issue of Saveur magazine, John Mariani writes of growing up Italian-American and eating giant portions of heavy Italian food: “We thought we were eating authentic Italian food, because the dishes were the same ones all the other Italian families we knew cooked and ate. But in reality, our cuisine was an American invention: an amalgam of hearty, rustic dishes brought here, primarily by southern Italian immigrants…then adapted and embellished upon in American kitchens.”

This hybrid cuisine took the essential ingredients of Italy and supersized them. Red sauce, mozzarella cheese, meatballs — all were transformed by importation into the land of plenty. As Mariani puts it: “It began, authentically enough, with Italian immigrants who were skilled at making the very most from the very least. The abbondanza for which Italian-American cooking is known stems from the fact that these immigrant cooks, most of whom came from dire poverty, took pride in being able to feed family and friends sumptuously on the kinds of foods they couldn’t afford back home. Ingredients like mozzarella and ricotta were no longer used as accents, or as meals in themselves: they were added to dishes with abandon.” Pizza went from being essentially a flatbread with very little cheese to the mozzarella-loaded beauties we see today. Meatballs grew; tomato-y marinara was invented. And places like Paesano sprung up all over the country.

Paesano is home to classic Italian-American fare: big portions, lots of red “gravy,” and piles of melted, gooey cheese. The food does not disappoint, especially given that for $24 we were also able to order a nicely balanced bottle of Paso Robles zinfandel to accompany our meal. 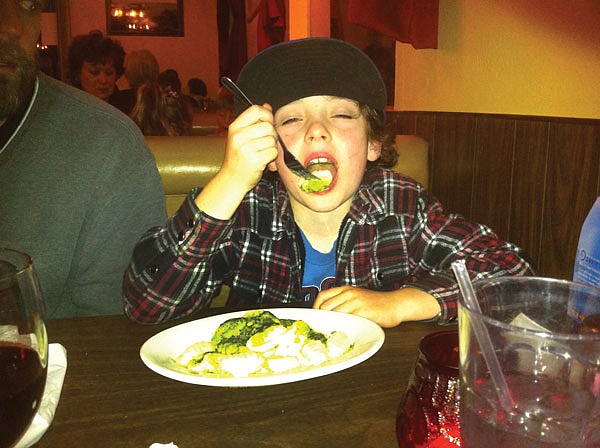 He won't eat vegetables — give him gnocchi with pesto.

The menu is standard, though it contains some surprises, like gnocchi, which you can order with one of their homemade sauces: marinara, meat, alfredo, or pesto. My son’s eyes lit up. He won’t eat vegetables, but give him gnocchi with pesto ($7 for a half order, or $12 for a full order that comes with a salad), and he can hardly contain himself. The Stuffed Bell Peppers, with sausage, basmati rice, and lots of herbs beneath a blanket of marinara and mozzarella ($8), were delicious, according to the dad of one of my son’s classmates, and it’s something on the menu that’s gluten-free. The pizzas are generously sauced and come with a dizzying array of toppings — the usual pepperoni and sausage, but also ground sirloin, gorgonzola cheese, homemade meatballs, “Tavern Ham,” and lots of different vegetables.

My husband was torn between the Baked Ravioli — homemade, and stuffed full of meat or cheese (full $11, half $7) — or the Sausages & Peppers served over spaghetti ($12). He compromised and went with the ravioli, which arrives sizzling in a baking dish, and a side order of meatball and sausage (a bargain at $3). The meats, made on site, were meltingly tender, perfectly spiced, and went well with both his dish and my Baked Eggplant Parmigiana (full $13, half $7). The eggplant was a very competent take on an Italian-American standard. A hearty casserole overflowing with mozzarella and long, thin, buttery slices of breaded eggplant, the full portion will leave you with enough food for lunch the next day.

Though the restaurant was jam-packed with patrons, the waitstaff was generous and attentive. Almost immediately after we ordered our food, the waiter plunked down a giant stack of the most delicious sourdough garlic bread. Buttered, garlic-laden, and toasted, I was again reminded of the Italian-American restaurant food I grew up with. After dinner, the waiter brought my son a dish of spumoni ice cream ($3) for dessert. I watched him take his first bite of this tri-color confection — chocolate, cherry, and almond — and it was like coming full circle.

Don’t expect a fine-dining experience here; there are plenty of “authentic” Italian restaurants in Little Italy or downtown. Instead, you’ll find a comfy neighborhood joint with good beer and wine, and lots of red sauce. Abbondanza! ■