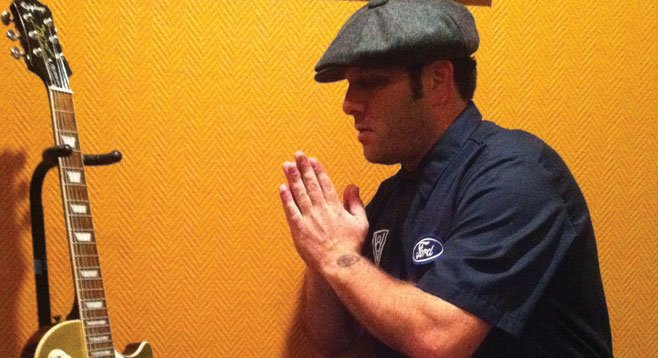 “It’s kind of a trip,” says Donald Vercelli, who plays Mike Ness in the Social D tribute band formerly known as Socially Distorted. “Apparently, Mr. Ness doesn’t like other bands spreading his music around.” In December, Vercelli was contacted by attorneys representing Social D in the form of a cease-and-desist letter claiming infringement on Social Distortion’s trademarked name and image:

“We recently discovered,” the letter reads in part, “that you have been using the name Socially Distorted and are using the Tribute Name in Connection with a ‘Tribute Band’ touring and performing, and possibly selling merchandise, as a facsimile of Social D. Unfortunately, because the Tribute name is nearly identical to our client’s name and mark, and both you and our client are operating in the field of entertainment services, Your use of the Tribute name has already, and will likely continue to, lead to confusion in the marketplace.”

“They think we’re making money selling merchandise,” Vercelli says. “We make enough money most nights to cover the beer tab, and we don’t have any merchandise to sell. If anything,” he says, “we lose about two grand per year.

“I went to a couple of lawyers, two at my work and one that specializes in tribute bands. I’ve never had to deal with anything like this.” The attorneys told Vercelli to abide by the request and that if he didn’t, the next letter might result in a costly summons to an L.A. courtroom.

Other bands, Vercelli says, embrace their tribute acts. “Not Mike Ness.” He points out that the all-girl Iron Maidens have opened for Iron Maiden and that Dave Grohl once sat in with a Foo Fighters tribute band.

Now that he has the attention of the Social D legal machine, Vercelli hopes to gain some kind of an endorsement from Ness. He points to an endorsement deal that locals Cash’d Out got from Johnny Cash. “We’re like Jim Jones,” Vercelli says, laughing, “spreading the gospel.” For the foreseeable future he and his band will soldier on under the name Total Distortion.