No SeaWorld fireworks after Mission Bay Parade of Lights

The annual nighttime holiday boat procession known as the Mission Bay Parade of Lights, held on Saturday, December 8, was not what it was advertised to be. Some websites stated approximately 100 boats would participate, over 60,000 spectators would attend, and the parade would conclude with a fireworks display from SeaWorld, along with the lighting of their "SkyTower" Christmas tree. 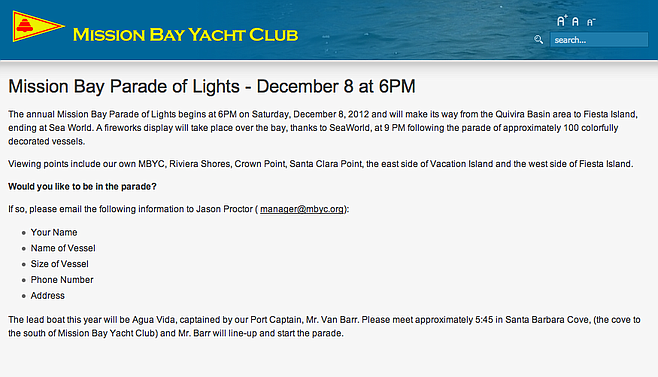 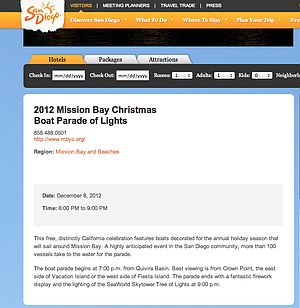 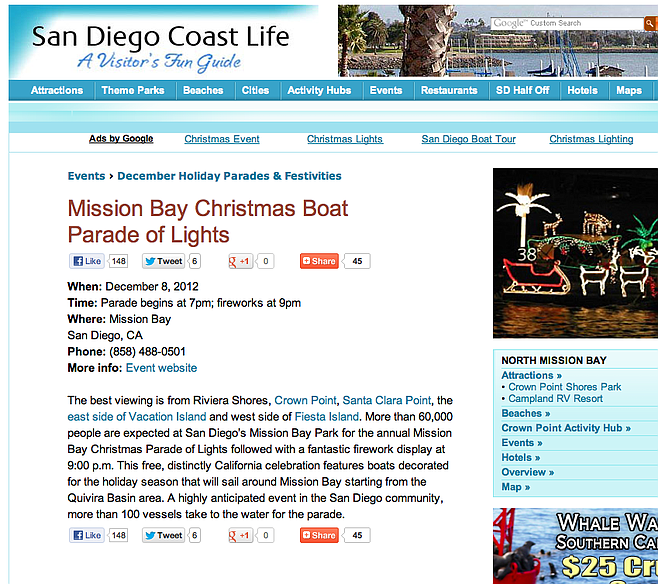 When we arrived around 5:30 p.m. at the advertised best viewing point (Ski Beach on Vacation Isle), the parking lot was empty. By 7:00, fewer than 50 cars occupied a parking lot that could have held a couple hundred.

Once the parade began, maybe 20 boats participated in a disorganized fashion — sometimes no boats passing in front of us for ten minutes at a time. There was no fireworks display at the end, and the SeaWorld tree was already lit when we arrived.

When I contacted the Mission Bay Yacht Club, which organizes the boat parade every year, I spoke to their office manager, who told me that this was the first year the parade did not have participation from SeaWorld. When asked why there were so many websites advertising the fireworks, she stated that sites must have copied the information from previous years without bothering to find out the real info. (But even Mission Bay Yacht Club’s site had the erroneous information.)

I then contacted SeaWorld and received an email from their communications director, David Koontz. "We haven’t conducted fireworks following the boat parade in a number of years,” he said. “Also, the lighting of our Skytower Tree of Lights is not done in conjunction with the boat parade."

I am shocked, SHOCKED, to find out that there was erroneous information on the interwebs! But seriously, the San Diego Bay boat parade is the one to go to.