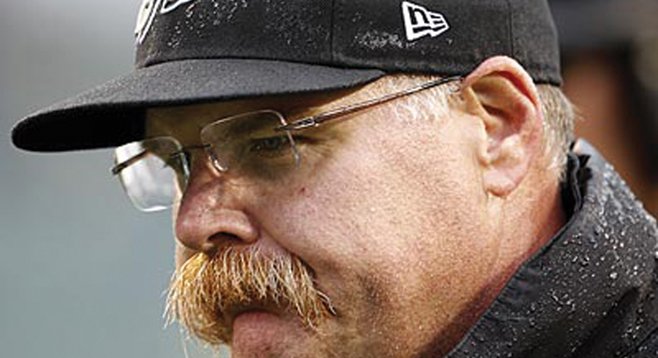 Oprah or O.J., just not Norv

Now comes the part where we speculate about the next head coach. This exercise may be more interesting than usual if, as is heard in the public square, general manager A.J. Smith is fired alongside Norv Turner. If true, this means the selection of the next pair of second-raters will rest entirely with Chargers CEO Dean Spanos.

I am not comforted.

Even the names that are bandied about cause an onset of stomach-churning queasiness. Published reports put Andy Reid, Philadelphia head coach, as a leading candidate. The sporting world rises as one and screams, “RETREAD!” Reid is burned out and it shows. Sure, the guy can coach, but not lately: 8-8 in 2011; 4-9 this year. Lately is all that counts in the NFL. Reid has family troubles, media troubles, locker-room troubles...the man needs a decade of quiet time. A good hire for San Diego.

Super-retread Mike Holmgren quit Green Bay, then had a good run in Seattle, making the playoffs six times and the Super Bowl once. Left after the 2008 season to become president of the Cleveland Browns. Four years later, Cleveland still sucks, but now sucks with a new owner who announced Holmgren will leave after the 2012 season.

Why not Mike Ditka?

And there’s super-super-retread Wade Phillips. It’s hard to believe this of anyone under the age of 117 years, but Phillips has been coaching in the NFL since Gerald Ford was president. The man can’t be stopped. He’s had three tries as head coach: two years at Denver, three years at Buffalo, and four years with Dallas. It hasn’t worked out. But he was the defensive coordinator for the Chargers in 2004, 2005, and 2006. The team had a very good run, winning 35 games against 13 losses. Spanos loves promoting people above their level of competency, so why not bring Wade back? Go ahead, hand him a ten-year contract.

Jon Gruden’s name has been mentioned. A fool’s dream. He’s got a great gig now as the new John Madden of MNF. Even if he grows weary of that and wants to get back into coaching, he’s not coming to San Diego. Ownership here is lame unto generations. Forget about winning — ownership can’t get a new stadium built, hasn’t figured out how to move to L.A., basically doesn’t know what it wants. Jon Gruden always knows what he wants.

Okay, can’t get the big brother, how about the little brother, Jay Gruden? He’s the offensive coordinator for the Cincinnati Bengals. They’re having a sort-of good year, 7-6, and could make the playoffs. Or not. I don’t really care.

Why not Kevin Gilbride?

So far, we’ve been talking about professional NFL coaches, stout-hearted men every one, but they’re all safe choices. Citizen, this is no time for safety. Dean Spanos must expand his vision, go wherever he needs to go in order to find the perfect fit.

How about the Italian cruise-ship captain Francesco Schettino? As you recall, he ran his cruise ship, the Costa Concordia, into the Italian coast last January. Thirty-two passengers and crew were killed. The good captain abandoned ship before crew, women, and children. Afterward, he explained that he “tripped” into a lifeboat.

But tripping is not the point. As the Costa Concordia was sinking, Captain Schettino called his wife, and according to an onboard black-box recording, said, “We hit a reef, the ship is listing, but I performed a great maneuver [and] everything is under control. Don’t worry, let’s forget all this sailing and we can start another job.”

Bottom line: The man is available and knows how to make excuses.

How about the CEO of Goldman Sachs, Lloyd Blankfein? He’s been CEO since May of 2006 and performed heroically during the Great Theft of 2008, guiding his company and company executives past the shallow reefs of federal prison and bankruptcy. As for the Goldman Sachs practice of selling worthless collateralized debt obligations to clients and then buying positions opposite the positions they had just sold, Blankfein testified before Congress, “Goldman Sachs had no moral or legal obligation to inform its clients it was betting against the product they were buying from Goldman Sachs, because they were acting in a fiduciary role.” Blankfein could mealy-mouth his way past a Chargers loss better than any coach in the NFL.

There are plenty of people out there who could do the job. John McAfee, Oprah Winfrey, O.J. Simpson, Yoko Ono, Ric Flair, Lil Wayne, Lindsay Lohan, and Hugh Hefner, for openers.

And yet, and yet, the Chargers have begun their traditional December win streak with a magnificent 34-24 victory over the despised Pittsburgh Steelers. Maybe Norv deserves another year.