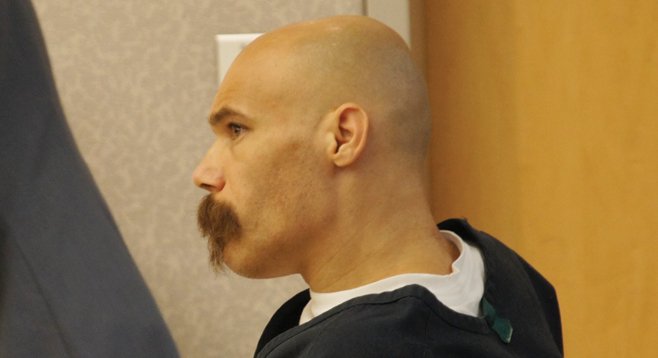 Ex-boyfriend, meth, a knife, a death

‘I got mad, and we were having pizza, and I threw pizza at him.” Shaquita said she threw the pizza at Fernando. She had been mad at him for some days, since she had loaned him $300.

On the evening of Friday, May 4, 2012, they were in her apartment together on Fig Street in Escondido.

Shaquita gets her money from the government. Her “public assistance” arrives on the first of the month. She said she had used an electronic benefits card at an ATM to withdraw the cash that she gave to Fernando. “We didn’t talk about why; I just gave it to him.” 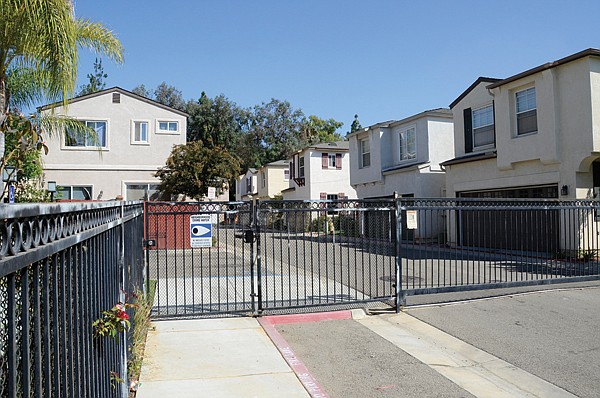 Fernando Arellano was stabbed to death in one of these Escondido townhomes.

She assumed Fernando would use the money to buy methamphetamine. They both used meth.

That Friday, Shaquita told Fernando she wanted her money back. But, “He wasn’t hearing me. Well, I got mad because he wasn’t taking me seriously.”

They weren’t really arguing, according to Shaquita. Instead, she says, Fernando was responding to her demands with “the silent treatment.”

Tired of his silent treatment, Shaquita grew irate and threw pizza at Fernando. “Then he got mad,” she says, “and he got on the phone, and he called someone, I believe a female, to come. And he said, ‘Come slap this girl.’ He said to come slap me.”

Shaquita said she told Fernando to leave, but he didn’t. He had a habit of not leaving when asked, Shaquita explained. “I mean, I would always [ask him to leave,] and it didn’t matter.” Fernando wanted to spend nights with her, Shaquita explained, because he was a jealous person. He thought that if he were there then she couldn’t be with someone else. 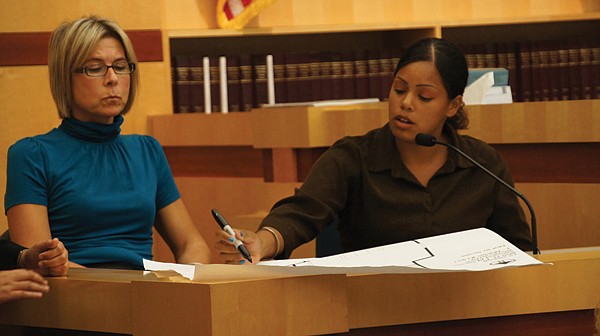 Shaquita Martinez (right), the meth user in whose townhome Arellano was killed, was given immunity by the district attorney’s office in exchange for testimony.

It was after 3:00 a.m., Saturday, May 5, when Shaquita decided to make a phone call. While Fernando was upstairs, Shaquita went downstairs, to the kitchen. She used her cell phone to call Chris, who is her former boyfriend and the father of two of her children.

What made her decide to make that call?

What did she tell Chris?

“I told him that Fernando was still there at my house. And he owed me money, and he wasn’t giving it to me. And that he just wasn’t acting right.”

Shaquita also told Chris that Fernando had phoned someone to come over and harm her.

“He said, ‘If I come over, will you tell?’ I said, ‘No.’” She had a restraining order on Chris. “Whenever he had come over I would call the cops. So he was asking me if he came was I going to call the cops.” It was a short conversation. “Not even a minute.”

Shaquita said she fell asleep in the bath. “And then that’s when I heard a scuffle or something going on.” She turned her head and caught a glimpse of someone. “I assumed it was Chris.” She heard noises. “Nobody spoke. I didn’t hear any words. I just heard, like, shoving.” The noise was over quickly. “Very fast, like, not even, like, a minute.” She grabbed a towel and walked toward her bedroom.

Fernando was there in her room, on the floor with his back to her bed. “He was on the side of my bed. He was not laying down, but he was somewhat sitting up.” He was still breathing then, but not moving. “He looked paralyzed to me.”

Shaquita ran to her daughters’ room. She crawled into bed with her girls, who are 11, 5, and 3 years old. “Then there’s a knock on the door.” It was Chris. “He told me to come out.” She came out.

Shaquita went downstairs, and Chris followed her. “Chris said, ‘Do you want me to take him?’ And I said, yes, take him to the hospital.”

Shaquita said she waited for Chris to leave, and then she walked to a friend’s home about a half mile away. It was also on Fig Street in Escondido. Somebody there phoned 911. Asked why didn’t she just go next door, Shaquita answered, “I would never go to my neighbors for anything.” 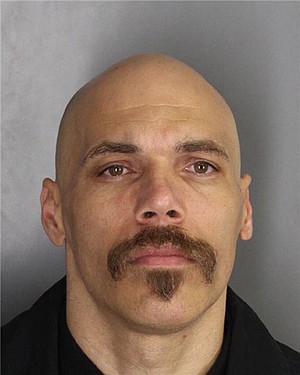 Nobody took Fernando to the hospital that Cinco de Mayo morning. Authorities responding to the 911 call found him dead at Shaquita’s apartment. According to the medical examiner’s report, Fernando was likely dead before Shaquita and Chris ever left the apartment. He had suffered a cluster of five stab wounds in the chest. One of his main arteries had been severed, an “immediately life threatening” wound, according to Dr. Bethann Schaber. “It would have taken minutes for him to bleed out, or exsanguinate.”

Escondido police officers arrested Christopher James Selena later May 5 at his place of work in Vista. Chris was taken into custody “without incident.” He is currently held in lieu of $5 million bail. Selena, 41, pleaded not guilty to one charge of murder.

Shaquita Martinez, 28, was granted immunity by the district attorney’s office in exchange for her testimony at a preliminary hearing October 18, 2012. ■

Where are the drug charges and fraud for using public assistance money to buy methamphetamine? Why is this even possible? This woman has three small children in the house, admitted to using probably the most dangerous of drugs, and she walks? Give me a ****ing break! Where is CPS? This story should be not about a murder, but how the government contributes to drug use, murder and child endangerment by allowing a system where public assistance moneys can easily be used to buy dangerous drugs.

Shaquita Martinez, 28, was granted immunity by the district attorney’s office in exchange for her testimony at a preliminary hearing October 18, 2012

This slimeball crackhead set the ball in motion for a murder, she belongs in PRISON. That she would get an immunity deal on a murder beef shows how broken the system is, ala a banana republic.

The ONLY reason this loser has $300 to spend METH to begin with was b/c she is a gov leech sponging off the taxpayers......

Go back and read the account, and you get a microcosm of what goes on in the Barrio/drug culture in the county. Public money squandered on meth, neglected kids, a circle of boyfriends who are all losers and a mother of three who is a big-time loser herself.

Trial began one week ago for Christopher James Selena, who is accused of murder. The 42-year-old defendant heard Shaquita testify again, during the first two days of trial. The defendant might take the witness stand himself, the end of this week or perhaps Monday October 7. The jury of 8 women and 4 men is expected to get the case to deliberate immediately thereafter. Honorable Judge Kathleen Lewis presides in San Diego's North County Superior Courthouse in Vista, California. 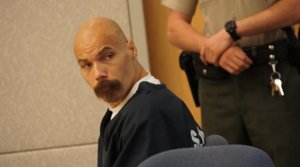 Defendant shaved off the whiskers for trial.