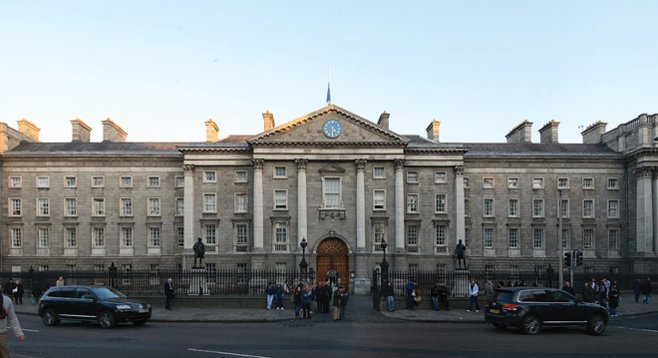 Blogging since: The Dawn of the Internet

Back home, I had gone to listen to a lecture by one of my favorite authors, Pete Hamill, and he had inspired me to do this study-abroad program at Trinity College in Dublin, Ireland. There was going to be a lot of writing involved, and that was okay with me. I have always known I could write my way out of hell. So, I took out the loan of $5500, and next thing I knew I was in the Emerald Isle….

Then there was Orestes, an Italian boy around my age, a penpal through my college.com email server. Orestes decided he wanted to finally meet me in person. I had just had vocal-cord surgery, and my voice was like that of a male tranny. While talking on the phone one day, Orestes got a rise out of me by telling me that for all he knew, I was a man. I was so mad at his distrust that I didn’t talk to him for days. Then he wrote that he was flying over to apologize in person, and bringing flowers for forgiveness. I didn’t believe it until Cheryl and I were picking him up from the airport. I was so nervous, I was having a Harp at ten in the morning at the airport bar.

As the passengers from Italy streamed through the gate, we looked on, hopeful that every Marcello Mastroianni lookalike was Orestes. I don’t know at which point a giant, smiling Quasimodo (sans hunchback) waved at us, but Cheryl and I just had to laugh. Had he looked like a movie star, he would have had me at “Hello,” but Orestes was truly a freak of nature. I had imagined an Adonis, since he was part Greek and part Italian, but instead, he was more like Hephaestus, the ugly Greek god of blacksmiths. Orestes had exaggerated features that made him look like he belonged in the circus. He was seven feet tall, his head was oddly shaped, his eyes too big, his teeth a mess.

I was cranky with a cold and angry that my Prince Charming had turned out to be a toad, but I found that Orestes was — and remains to this day — the most honest and loyal friend I’ve ever had. We became traveling companions, exploring Dublin together on daily excursions, driven by our desire to get out and be free and spontaneous. Our friendship was the purest I have ever had with another human being. No, we never had anything sexual; our hugs at the end of the day were acts of sincere fondness for each other, an expression of gratitude. The best times I had in Ireland were in the company of Cheryl and Orestes; and when I was with the both of them, I felt truly blessed.

Orestes left Dublin two days before my then-boyfriend Fulvio met up with me there. I didn’t cry when we said our goodbyes; I just stared at him and was suddenly struck by his beauty. I hate goodbyes. One last hug, and as I turned away and walked in the direction of Trinity, the tears flooded my eyes with cheap mascara that should have stung, but the pain was all in my heart.

Orestes kept in touch with me for a while, but one day, past-dweller that I am, I nostalgically recalled, for the hundredth time, all the wonderful things we had seen and done in Dublin. We had both grown fond of Malahide and its magnificent castle. We must have done that tour about half a dozen times and eaten at all the restaurants in town. I dreamily said, “ I left my heart in Irelandl I must go back.” To this he replied, “I left my heart with you, so you MUST come back.” I flinched. Why did things have to get so complicated?

I don’t remember what I said. Knowing how I am, playing the tough girl all the time, I probably laughed nervously and told him he was delusional and being completely ridiculous at the moment. Humbled and humiliated, Orestes honorably retreated back to his engineering studies, motorcycles, and mean girls. I lost him, and I haven’t been back to Ireland for 12 years.