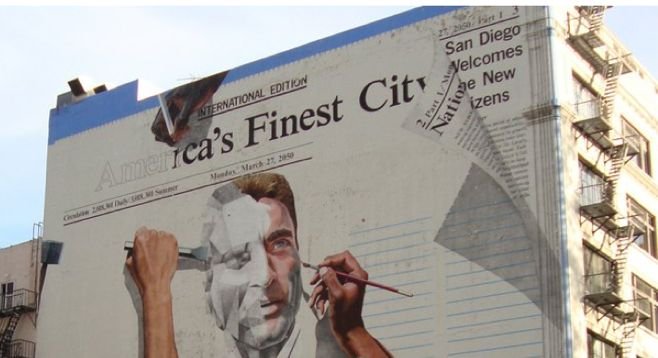 Hey Matt,
I’m curious about the mural on the north wall of the “1111 Sixth Avenue” building. It’s an “America’s Finest City” newspaper with a partially finished picture of Burt Lancaster. The newspaper date is Monday, March 27, 2050. My computer says March 27th will be a Sunday. Do you know anything about it?
— J, via email

The mural’s been there on the Arte Building for a while. Kathleen King and Paul Naton painted it in 1989. I have it on good authority that the face on the mural isn’t Burt Lancaster. The man’s name is Matthew Tighe. He was working as a model in SD and he was picked for being the classic “American mutt” with a mixture of some 14-odd ethnic groups swimming around in his DNA. Multiculturalism and concern over racial tension is emblematic of the early ’90s “culture war,” which led to movies like PCU being made (in addition to a lot of good things), but it’s no less topical in 2012.

The idea behind the piece is that “America’s Finest City” is a nickname that San Diego was (is?) still in the process of earning. In ’89, the slogan was a newbie and the city was still trying it on for size. The content of the mural was King’s idea and she credits the late developer Chris Mortenson with giving her artistic freedom on the project. The message of the piece is that, if San Diego is really going to live up to the title of “finest,” the city has to embrace art as an element of public life. Looking back 20 years later, King (now working out in Colorado) still stands by the theory that a great city must have great art and that the only way to make a city grand is to focus on improving the lives of the people who live there. For her, public art is a big part of that quality of life.

March 27, 2050, will be the bicentennial anniversary of San Diego’s incorporation. The implication is that there’s a lot of history to be written before the San Diego story is anything like finished.

There’s a tendency in city planning, invisible to most of us, for public art to be commissioned that glorifies some aspect of the town — be it history, natural resources, or whatever. For example, to make the city look good for tourists, San Diego developers would want to see murals that depict, like, happy Kumeyaay indians, surfers, trolley cars, and the USS Midway. I’m just pulling random images out of the air, but I think you get the picture. Make it tourist-friendly.

Now, where have I heard that before?

The even more extreme form would be to craft outright advertisements that pose as artwork. Go take a look at the “mural” on the wall around the corner from El Zarape in University Heights. It’s really a Newcastle beer advertisement made to look like street art, and that rubs artists the wrong way. For a lot of them, art doesn’t represent the interest of business. If anything, it rejects it. King’s message from ’89 still resonates.

Enigmatic response here to a good question. You say "led to movies like PCU being made" but what are you talking about? And the rest of the explanation of the mural seems like a stretch.

"America's Finest City" was a defensive response from City Hall back in the day to political scandal that led to cancellation of a GOP convention here. The term has been used ever since either ironically or sincerely, depending on your political orientation. Presumably the artists were being ironic.

Would that I had the column inches to blather on a bit about the "culture war" of the early nineties, the rise of PC, and the politically tricky complications of third-wave feminism and multiculturalism, among other things! There are graduate seminars devoted to the subject for good reasons. Let's suffice to say that I merely wanted to evoke the political and academic climate of late-80's and early-90's leftist America as a way to frame up the genesis of this mural in the culture of the time.

As for the reasons behind the mural, I can't fault KK her own explanation! I think there was a mixture of irony involved in the beginning, but that was always tempered by a degree of optimism on the part of the artist. There was hope that SD would grow into the moniker and I don't think that the artist would have lifted a brush without a little faith in the message.

Yes, hello, artist here. You think my explanation of my work is a stretch? Again, column inches... The piece has layers of meaning including aging/inadequate infrastructure being ignored while the city focused on courting an ever increasing influx of tourism, efforts to turn the city into a giant theme park, catering solely to the interests of tourists while city services failed to meet the needs of residents, pricing artists out of the downtown loft spaces they had renovated so developers could turn them into $500k condos, etc. How much time do you have? San Diego did host the GOP convention in 1996 and covered up my mural that spanned a corner at Fifth and Broadway because it contained famous quotations on the subject of peace and planners feared that art about peace might offend Republican sensibilities. Has San Diego grown up, or is it still sucking up? At the optimistic age of 25 I was hoping that growth would beget cultural/civic maturity.

At the optimistic age of 25 I was hoping that growth would beget cultural/civic maturity.