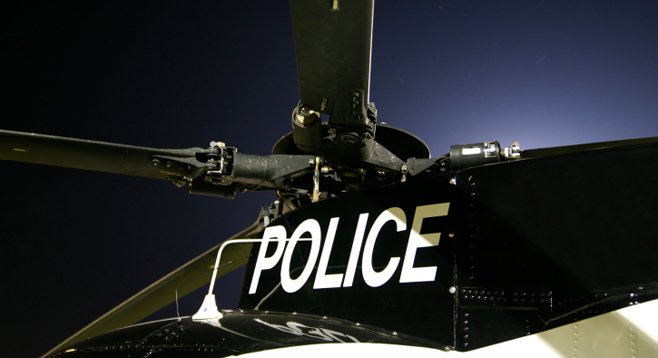 The comments printed with “Like Beirut,” News Ticker, support the repeated complaints I have heard regarding noise from helicopters — especially at night. Despite living in a relatively low crime area, I am awakened several days a week (sometimes multiple times during the night) by low-flying choppers.

The area has many retirees, veterans, and active duty personnel. In an interview with the Union-Tribune (October 4, 2012), Dr. Jonathan Shay, a specialist dealing with veterans and PTSD, points out that, “The most important single thing is adequate, good quality sleep.” Our elected officials who express a special concern for the veteran/military population would benefit from talking with Dr. Shay.

When returning from Vietnam (part of my tour was as a battalion surgeon with the Marines) I had some sleep problems, which resolved. Now I have sleep problems again.

I wonder why the SDPD is not concerned that, even in people who have a very positive attitude toward law enforcement, this repeated and frequent association with police helicopters is going to result in negative attitudes toward the individual police officer.

The Various Sides of Giving

I am a panhandler and I hate it. Unlike Mr. Foster (“Will Work for Food,” October 25), I don’t take advantage of the good and giving people of San Diego. If I make $65 a day I thank God for the ones that gave. I am just an old lady who is homeless and I only go and stand on my corner once, maybe twice a week, only when I really need to.

I thank God every day for the ones I call my guardian angels. If not for them, my husband and I would just be a statistic. So, I want to thank all of my angels. My first day out I made $105, and $100 was from a super nice gentleman who followed me to the park and told me that God told him to give it to me. Then there is the USD student who stopped to tell me that God loved me and later brought Subway sandwiches. We ate every morsel. There was a little girl who wanted us to be healthy and gave many health food bars, water, socks, oranges, pears...these things were very much appreciated and scarfed down. The change — ones, fives, tens, and twenties — that you all gave showed me that there is love in San Diego.

I used to be on the other side of the giving. If they asked for $1, I would give $5. I gave until 2007 when I lost everything I had worked for all my life to live out my old age. Now I find I’m on the asking side of the coin. I know God the father is watching over me and my husband.

One lady asked me if I smoked. “Yes,” I said. She couldn’t help me. I guess if I was on drugs or drunk she could have helped me. I smoke Philly cigars — only $1 a pack. Another girl told me to get a job. I was probably working when she was still in diapers. I should not have let her get me upset. I worked for 22 years at the phone company. Now I can’t work for multiple reasons. If I could work, I would rather work than ask you for anything.

I hate standing on Tecolote and I-5 South, probably more than you hate to see me. I say to the ones that roll up their windows, here but for the grace of God stands your mother, daughter, sister, or yourself, and be thankful to God that this is not happening to someone in your life.

I am not as greedy as Mr. Foster, and I don’t take advantage of your good and giving hearts. In fact, I stand in my old neighborhood, I feel safe there. It’s open and near the Highway Patrol office. I trust these angels and I know that if something were to happen to me out there, my angels would help me.

God bless you all and may Jesus ride with you wherever you go.

It was good to see that Don Bauder did a follow-up piece exposing the charlatans at Western Financial Securities (City Lights: “San Diego’s Schooler Brothers,” November 1). I was an investor who was duped by one of their representatives into investing my retirement savings in their recommended “safe” investments. Like many other investors, my investments turned out to be mainly Ponzi schemes that earned Western Financial Securities high commissions.

After finding out that these were phony investments, I immediately, contacted the Financial Industry Regulatory Authority and the Securities and Exchange Commission. I was assured by both agencies that my case had merit and would be acted upon.

I met with FINRA lawyers who traveled to San Diego from Los Angeles to review the documents that I had sent to them. Again it was indicated to me that my case against WFP was legitimate and worthy of their action. I put my faith in their organization and felt confident that WFP would be held accountable.

Well, years have gone by without any action by either group. Both agencies keep assuring me that some sort of action will be forthcoming because of these blatant abuses. After years of waiting, I’m still wondering when that will be, My repeated calls to both the SEC and FINRA were met with the same, “We can’t talk about the case until it becomes public record, but the case has moved to our enforcement branches,” Logically, if the case warranted a move to enforcement then some malfeasance must have been found.

Trying a different approach, I contacted Barbara Boxer’s office and asked if there was a way to expedite the findings of the SEC. I was then sent a letter from her office telling me that the Commission was working on it. More empty promises.

Now I’ve made two errors: Trusting the investment counselor from WFP and putting my faith in the agencies that are suppose to protect investors from unscrupulous investment salesmen.

Ghetto Fabulous by the Numbers

While reading, “My Friend Kelly, a Prostitute?” (September 20 cover story), I had to laugh when the author mentioned “ghetto fabulous” and stated that she had only seen that at Plaza Bonita.

Plaza Bonita? Really? And you live in inland North County? My dear, have you ever been to the North County Fair? Now, that place is the ghetto-fabulous dress headquarters of San Diego County!

In fact, after reading that article, my teenaged daughter (who never says no to shopping) and I went out on a two-day, weekend mall-excursion and did an informal survey of the number of ghetto-fabulously dressed young women we observed. This was based solely on my daughter’s opinion, since I am fashion-challenged when it comes to these things.

I would have liked to have done more “research,” but ran out of money. Maybe next year.

I found the article “Deported” (October 11 cover story) to portray a very moving and visual perspective of the deportation process. As a non-U.S. citizen, I am able to sympathize with the issue. Although I am legally residing in the U.S. as a student, I find myself fearful of legal encounters as my rights are not equivalent with those of a U.S. national. Unlike the rights of a citizen, mine can be easily stripped.

For example, Frank differentiates his experience from that of a “white guy” who was incarcerated for the same crime. Additionally, Elizabeth depicts the horror and intimidation from INS agents in an extremely personal tone.

I appreciate the publicity that this article attained by being featured on the front cover. I hope that with awareness, more sympathy can be implemented in these situations and that laws will eventually be altered to favor undocumented immigrants with clean records.

I met with FINRA lawyers who traveled to San Diego from Los Angeles to review the documents that I had sent to them. Again it was indicated to me that my case against WFP was legitimate and worthy of their action. I put my faith in their organization and felt confident that WFP would be held accountable. Well, years have gone by without any action by either group

The gov is waiting for the statute of limitations to run so their buddies @ WFP are home free. The gov cannot be trusted for anythng...trust me on that one

Heres Beto Cuevas, hes Chilean and one of the judges on the Voice:Mexico. The Song is 'I Want to believe' live with and featuring Flo Rida