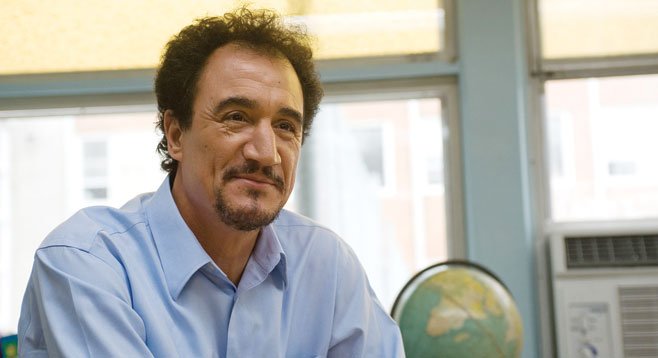 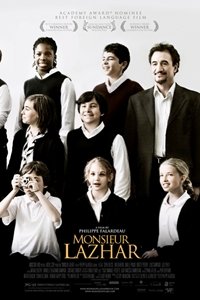 Last year, Inspector Bellamy. This year, Monsieur Lazhar. Both spiritually French, with an excellent central performance: Gerárd Depardieu as Bellamy, Mohamed Fellag as Lazhar. Philippe Falardeau’s French-Canadian movie dramatizes a teacher and students with exemplary skill. For me, the closest analogy is Nicolas Philibert’s great school documentary To Be and to Have.

Bachir Lazhar, recently emigrated from Algeria and recently widowed by the death of his teaching wife, offers himself as teacher at a Montreal school. His bona fides are poor, but the principal (appealing Danielle Proulx) is rattled and desperate. A popular teacher recently committed suicide, hanging herself near the classroom. Her motivation remains opaque, but she was much loved by the students, and their shock runs beyond their ability to express it.

And Bachir is a very sympathetic soul. He is firm but kind, fond of order (desks in a straight row, precise grammar), even more fond of the potential he sees in each child. Fellag shows a man whose heart is torn between Algiers and Montreal, between a lost past and a risky present. The kids, age 11 to 13, are so well cast that they seem beyond acting. Most important are the two students who saw the hanging body: the bright, lovely Alice (Sophie Nélisse), and skinny, scrappy, inwardly churning Simon (Émilien Néron).

I took no notes — bad student but a pleased critic. Bachir is almost too good, yet always vulnerably genuine, an uprooted man who has taken on the nationality of basic humanity. This moving film is not an issues checklist, not a hysterical whine like the recent school-drama Detachment. At its rooted core, Monsieur Lazhar is a portrait of civilization at work. 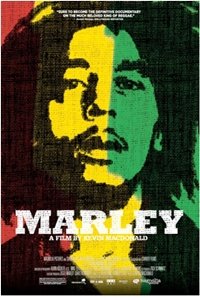 Elvis Presley, king of rock, was buried in a casket of myth well before dying at age 42. Bob Marley, king of reggae, died at 36 and still seems remarkably alive. Even Elvis’s movies had fewer worshipful close-ups than Marley, a docu-shrine directed by Kevin Macdonald (Last King of Scotland).

This film feels current, as if its hero died last month rather than in 1981. Though we see a shrunken Bob near the end, dreadlocks gone, baldness covered by his Rastafarian hat (this is a great headgear movie), it is the stage-prancing, song-crooning Marley we remember. He kept going long after melanoma was first detected, and it wasn’t an act. What you got from Bob Marley was a life, something much more than a packaged image (late Elvis was like a billboard on steroids).

Robert Marley was a shy, skinny, biracial kid in a Jamaican village. His white father was seldom seen, his black mom would later exit for the U.S., leaving Bob behind. Music was everything to him (ska, calypso, American doo-wop groups). He seemed to have a special armor of aura, a wonderful smile, a rakish profile that the dreads framed perfectly. No wonder he fathered eleven kids by seven women (one is Cindy Breakspeare, Miss World of 1976, still magnetic and canny).

The marvel of Marley, given his upbringing, is that he didn’t carry a big chip on his soul. He saw music as a way of reaching for the best and rallying the weak and oppressed, with a nectar of generosity and more than a whiff of spliff. His religion, the Rasta faith, worships the Ethiopian emperor Haile Selassie as a god of black pride. In a fine touch, Marley’s plane is mobbed at Kingston airport just as Selassie was in Bob’s youth. An idealist (though his kids experienced some tough love), it may never have occurred to him that the “divine” monarch was also a medieval relic.

Marley feels utterly Jamaican. Sexy colors and hormonal music blend with the conquering smile. At 16 Bob wrote the song “Judge Not,” and only a fool or a racist would judge him harshly. The celebration opens April 27. 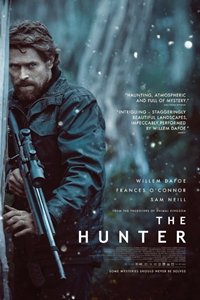 With his gaunt, rocky face, Willem Dafoe can seem predatory — remember his beastly Bobby Peru in Wild at Heart? If not a hunter, he was a “fisher of men” as Jesus in The Last Temptation of Christ.

His Martin David in The Hunter is used to hunting humans but is secretly hired by a land company to track and kill the last “Tasmanian tiger,” or thylacine. Alive, the animal might impede development. He heads into the deep woods of Tasmania, a large island south of Australia. Though very much at home in the wild, Martin starts to fear that another hunter is tracking him.

The thylacine, a marsupial that looked like a long, partially striped dog, was declared extinct decades ago. This movie has old zoo footage and relies on some CGI magic. The mystery of the creature (unproven sightings are still claimed) is resonated by Robert Humphreys’s excellent landscape photography. The film has a mood of Jack London Down Under, with sprinkled aspects of Peter Mathiessen and Werner Herzog.

In filming Julia Leigh’s novel, Aussie director Daniel Nettheim seeks to make a macho thriller, a family story, and an eco-issue picture. Sam Neill presides vaguely over tensions between angry loggers and righteous greenies. Frances O’Connor is the widow of a zoologist who was murdered, and Morgana Davies of The Tree is good as her daughter. Romantic shivers amount to little because the hunter, though fond of a warm bath and cups of tea, is a loner.

Despite its natural beauty and Dafoe’s craggy charisma, The Hunter lacks the unsettling grip of William Wellman’s Track of the Cat, in which Robert Mitchum is spooked by a ghostly mountain lion. Still, this hunter’s tale should stick in memory, like the Tasmanian tiger. 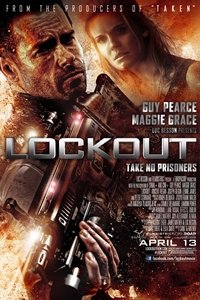 No wonder the jailbirds in an orbiting prison are unhappy in Lockout. Their world is an ugly spaceship of gray metal, with only orange uniforms for contrast. It’s 2079, and the rioting cons are badly led by Alex (Vincent Regan), who has kidnapped the President’s wow daughter Emilie (Maggie Grace) during her idiotic goodwill visit.

Alex wants to avoid killing his sadistic brother (Joseph Gilgun), who is a sort of insane meth monkey, and must figure out how to use Emilie. A small mind surrounded by fools, Alex is up against agent Snow (Guy Pearce). You can clobber Snow’s face but his lippy mouth keeps spraying zingers. Emilie is special, too. Soon after taking a syringe straight in the eyeball, she looks ready for a Vogue cover shoot.

We are pinballed through loud nonsense from an “original concept” by Luc Besson (so original he must have missed John Carpenter’s Escape From New York). Mainly this is more waste from the Blade Runner flush pipe. How could a movie that vividly impressive have spawned so much slop? Many viewers will not get the John Wayne joke, but the set up for a sequel (please, no) is obvious. 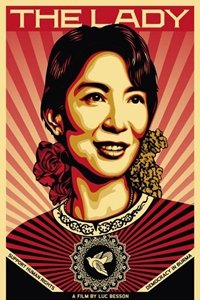 Aung San Suu Kyi, held under house arrest for years by the Burmese military regime, is a Nobel Peace Prize winner whose democratic crusade has not been hurt by her elegant looks. She is rather like Gandhi crossed with Audrey Hepburn. The Malaysian-Chinese beauty Michelle Yeoh does a fine and touching impersonation, but The Lady is, despite some realistic brutality, too ladylike.

We sense director Luc Besson, who filmed more exciting women in La Femme Nikita, Angel-A, and The Messenger, straining under the spell of his subject’s gentle, patient dignity. Her spaniel-eyed English husband (David Thewlis) suffers in sync. Dialogue stacks up clichés (“There is still a great deal to do”), and settings are burnished to a travel-magazine gloss in a film of honorable but uninspired sympathy.

Unforgotten: On Tuesday (April 17), how many recalled that Dick Shawn died that day 25 years ago on the stage of UCSD’s Mandeville Hall? Still a very cool comedian at 63, Shawn had the crowd so digging his act that when he fell dead of a heart attack it took some time for viewers to realize that he had, in fact, had the last laugh. His best work on film will forever be LSD, the crazy hipster who plays Hitler hilariously in Mel Brooks’s The Producers (1968).

Reviewed in movie capsules: Blue Like Jazz, The Island President, and The Three Stooges.