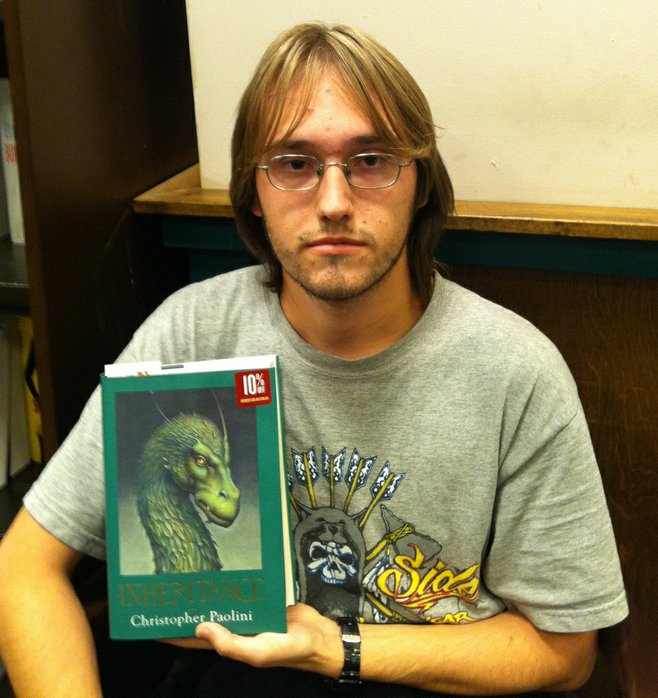 “Inheritance, by Christopher Paolini. This is the last book in his Eragon series, and it just came out today. I started reading the series because my brother read the first one, Eragon, and told me about it.”

Tell me about it.

“It’s a fantasy series about a 15-year-old boy who starts out as a farmer in a small village. One day, this blue stone appears in front of him while he’s hunting, and he takes it home. A couple of weeks later, it hatches into a dragon, and he becomes a dragon rider. There used to be an entire force of them; they were peacekeepers. But one of them, Galbatorix, went bad. His dragon was killed, and he stole another dragon and recruited some others, and they destroyed the riders. Then he took over and made himself king. Eragon sets out on a journey to learn to fight and use magic so that he can join the resistance and defeat the king. Part of the mystery of the book is that, even by this point in the series — I’m on page 123 — you’ve never seen Galbatorix or his dragon. You’ve only heard about them.”

“I like his details — he describes scenes very well. And I like the way the author switches between the different characters — he doesn’t tell the story from just one point of view.”

“Eragon’s cousin; he’s called Roran Stronghammer. He’s one of the few characters in the book who’s a great warrior but is completely normal. He’s very intelligent and strong, but he doesn’t use magic or ride a dragon. He just fights with what he has. There was a scene in the last book, Brisingr, where Roran is a soldier and his commanding officer orders the soldiers into battle. But the order would have led to all the soldiers being killed. Roran, knowing that he would be punished for insubordination, went against his commanding officer’s orders and told the men to do something else. They ended up winning and also saved all the soldiers’ lives. I liked that he did, even though he knew he would be punished.”

What book was most life-changing for you or opened your eyes in some way?

“Maybe Ender’s Game, by Orson Scott Card. Most of the characters in it are really young kids, between the ages of 5 and 12. All of them have super-genius levels of intelligence. As a result, they have power that normal kids don’t have. Two of them are always going on the internet, visiting political websites, gaining influence. One of them, by the time he’s 15, he’s almost become the leader of the world.”

Do you see that as a metaphor about young people, how they have power inside them that hasn’t been unlocked?

“James Patterson. Some authors take too long to get into a scene. They draw them out, and you start to get bored. I don’t even finish books by certain authors. But Patterson gets into the scene while still giving you detail. He’s not rushing through it. He did the Maximum Ride series, which is sort of adventure with a little sci-fi.”

Do you talk to anyone about what you’re reading?

“Yes, my brother. We read a lot of the same books. We’ll talk about characters and events in the books, speculate on what we think is going to happen.”