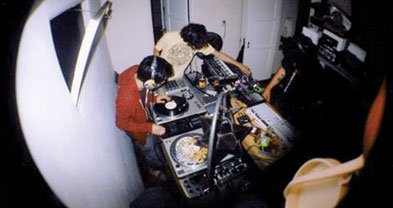 “I’d run my tape player into my guitar pedals and play Lee Scratch Perry through it. I’ve also been into R&B since I was really young. But it wasn’t until about five years ago that I picked up a sampler and ran it through my pedals, and I’ve been refining my style ever since.”

That style has come to include nods to noise (Romeri cites Per Mission, Soul-Junk, and Three One G Records), hip-hop, and ambient music.

“Generally, we’ll have a few samples and a key, some changes, but it’s loosely structured,” says Romeri, a 26-year-old web and graphic designer by trade. “There’s a good amount of improvisation. We take cues from free jazz, where there’s a theme but everyone’s doing their own thing.”

Equipped with SP404 samplers, synths, loop stations, effects boxes, and turntables, Romeri (former guitarist of Get Back Loretta) and a rotating cast, including Nicky Castañeda and David Peña, have shared the stage with Zach Hill, Dhani Harrison (George’s son), and Subtle (Doseone).

“It’s been a slow start,” says Romeri, “but now there’s a big local audience [for beat music], which is what I’m focusing on right now.”

“Kill Quanti has been this growing idea for about two years now. Booking and bringing the beat scene to San Diego — Gaslamp Killer, Teebs, Strangeloop, Schlomo, Ras G — anybody exploratory with electronics. Stuff I really believe in.”

“San Diego is legendary for its music,” says Romeri. “I want to keep that legacy going.”

Illuminauts play with Dam Funk and Matthewdavid on November 4 at the Casbah.

Ordinary Love,: Worth fighting for