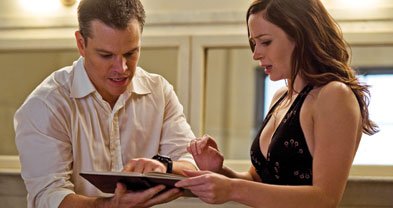 For everyone who couldn’t get enough of the Matt Damon metaphysical muddle in Hereafter, here’s a second helping, the chief lesson of which seems to be: it’s hard out there for an angel of God. Er, for an agent of the Chairman. Sure, you get to live a lot longer than regular people, but you’re overworked, understaffed, unable to do your job around the stuff covering 70 percent of the earth, and, to top it off, you lose your spacebending mojo unless you’re wearing a hat that went out of style in 1964. No, wait, to really top it off, you’re just as clueless about your job — “making sure things go according to plan” — as the poor slobs you’re trying to regulate. And don’t even get one of these guys started on that fickle trickster Chance. Frustration at every turn — no wonder the soundtrack is so full of what feels like New Age relaxation loops.

The regular, regulated people don’t have it much better. Somewhere along the way, a politely threatening agent (Terence Stamp) subjects our rebellious hero (Damon) to a lengthy, ludicrous scolding about humanity’s use and abuse of reason throughout its dark and troubled history. But just a little later we learn that humans were built to run on emotion. That’s like bagging on a ’64 Mustang for not running on electricity. Thanks a lot, God — er, Mr. Chairman!

Despite all the nonsense and leaden pacing, everyone seems to be having a good time looking wonderful. Damon is All-American handsome as a bad-boy politician, Emily Blunt is lissome and witty as a hipster ballerina, and the two manage some decent meet-cute dialogue before Fate (or the Plan, or Divine Providence, or whatever) intervenes to keep them apart.

Of course, as the agents assure them, it’s for their own good. And if there’s one thing that freedom-loving Beautiful People hate, it’s some self-appointed Higher Power telling them that something they don’t like is for their own good. In this case, it turns out that they have good reason. God turns out to be something of a big-picture jerk, pushing his Chosen Few toward greatness. He’s got history to engineer — he can’t be bothered with your petty need for personal healing and happiness! Your only chance, it seems, is to fight for your freedom and maybe catch His attention. This is how Hollywood handles upping the stakes in the romance department: to stay together, boy and girl must literally move Heaven and Earth.

For a religious picture, Vanishing on 7th Street does a decent job of keeping it real. Which is to say: God’s ways remain mysterious throughout.

Oh, yes, it’s a religious picture, or at the very least a metaphysical one. (There’s that word again!) The struggle to survive recast as the struggle to exist — very high-minded. When darkness descends upon the land and nearly everybody vanishes into the consuming shadows, a quartet of survivors gather at Sonny’s (!) still-lit bar and start hashing things out. “This is no accident,” asserts Thandie Newton’s druggie-turned–physical therapist. “There is a reason.” To which Hayden Christensen’s world-weary TV reporter replies, “You gonna lay your Catholic guilt on us now?” Later, she talks about being left behind, and he calls her a fundamentalist before snarking that God has closed up shop like everybody else. Meanwhile, projectionist-cum-physicist John Leguizamo mutters about the Roanoke colony, math that doesn’t add up, and the way computers shut down prior to reboot. But, then again, teen Jacob Latimore’s mom heard there was a light in the church....

Who’s right? It’s a mystery. There doesn’t seem to be any roadmap to earthly deliverance — no rules to be discovered, no personal demon to be overcome, no heroic quest to be achieved. Just poor souls flailing in the dark. Good theology? Maybe. Lousy drama? Definitely. A random universe tells no story. And speaking of random, there are enough throwaway details here to distract the viewer with questions about what got left on the cutting-room floor. The significance of the Monopoly racecar, Christensen’s complicated predarkness love life, the lone little girl lifted straight from the set of Aliens — all head-scratchers.

The film gains some momentum (if not necessarily coherence) when Christensen decides that everyone needs to help him jump a truck and drive to Chicago. And there are some fine creepy touches — in particular, the slurring and stuttering of a jukebox as the generator hiccups and the lights begin to flicker out. But none of it — and this is the part that really matters — is enough to obscure the fact that Vanishing, whatever else it may be, just isn’t that scary.

Under the Boardwalk: The Monopoly Story

File under: Local boys make good. San Diego–based moviefolk Kevin Tostado (director/producer), Craig Bentley (producer), and Jordan Guzzardo (director of photography) team up to do for Monopoly what Wordplay did for crossword puzzles. Scads of fun facts and endearing personalities are peppered through the story of the 2009 Monopoly World Championships in Las Vegas. The result is gently entertaining and even thought-provoking, though it could have stood a little less from the psychologist about why people like buying property and a lot more on the neat inversion that took the game’s original incarnation, Lizzie Magie’s anti-capitalist The Landlord’s Game, and transformed it into a nigh-perfect celebration of capitalist competition. Of particular interest are the various explanations offered for preferring this or that playing piece: “I like the iron. I think people don’t notice it.”