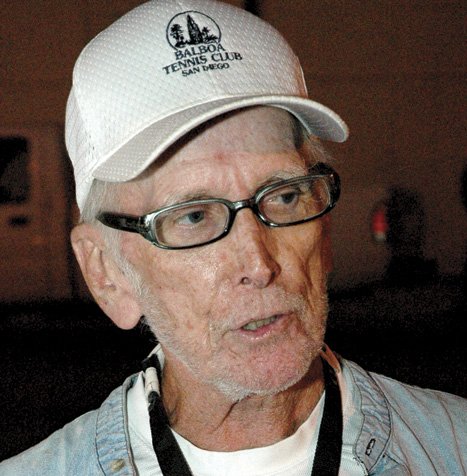 The Waterman Wins One

“Another Dustup for ‘Waterman’ and Police.” This was the headline May 19, 2011, in the Union-Tribune for a story by Kristina Davis. It was about the arrest of David “the Waterman” Ross, “two weeks after Ross won a judgment against San Diego police officer Daniel McLaughlin who was ordered to pay him $4,000 following a 2009 sidewalk encounter.”

That encounter consisted of Ross intervening in a police action and being “tossed to the ground by McLaughlin.” This dustup was over the policeman’s use of obscenity in confronting a homeless woman. But Ross has also felt the need to do something about local police rousting the homeless and seizing their possessions.

According to the blog of the Isaiah Project (headed by Gerry Limpic and partners, with Ross), dated September 30, 2009, “The City Ups the Ante: We knew something was up when, as we were cleaning up after our Block Party around 5 p.m., three police cruisers pulled up, lights flashing and speakers blaring, ordering the people on the other side of the fence who were lining up for the night to immediately vacate the area under threat of arrest. It was as if our block party was the last straw.... [T]he police now seemed to be on a mission to ‘Reject and Unnerve’ instead of ‘Protect and Serve.’

“That week signs went up warning that ‘Debris etc.’ left abandoned would be taken by authorities. The only problem is defining debris and abandoned. What we have here is a failure to communicate. I can’t describe how devastating it was for dozens of shopping carts...with personal belongings, necessary medications for mental and physical problems, drivers licenses, insurance cards and irreplaceable photos and mementos to be in a Gestapo-like manner crushed and destroyed while the owners were attending services across the street at a local mission [God’s Extended Hand].... Heartless and cruel and vindictive...and a blatant breach of the 14th Amendment. The 14th Amendment ‘prohibits state and local governments from depriving persons of life, liberty, or property without certain steps being taken to ensure fairness.’”

Ross has taken this litigation settlement and, along with Gerry Limpic, Dan McRay, Paul W., and other volunteers, founded the Waterman Check-in Center, “a storage service provided to the people on the streets of San Diego to store their personal belongings and to assist the businesses and visitors by providing a cleaner, safer environment.”

Located at 917 Ninth Avenue, at E Street, the facility has a list of 20 rules given to those seeking to store belongings: an I.D. is required and a receipt is needed to access bins; no medication, food waste matter, or illegal material allowed; abandoned property will be discarded after 60 days (Ross confided that they have yet to discard anything and showed me an area with quite possibly a ton of backpacks and duffle bags.); and bicycles, carts, wheelchairs, or strollers can be stored. One unpleasant reality is addressed on the sheet in rule number 12: “Urinating or defecating inside or outside of check-in area will result in immediate and possible permanent loss of bin.” This has occurred more than once, and Dan McRay has dealt with incontinent clients without anger or humiliation and taken them to another shelter facility such as Neil Goode Day Center or Saint Vincent’s, where they could shower. McRay commented that he joined Ross at the Waterman Check-in Center after leaving a facility where he had worked for many years. “I was frustrated that I was not encouraged to treat people as human beings. Unfortunately, that’s the only way they know how to deal with people. That’s wrong to me. Dave don’t do that. He knows the people. He’s out there on the streets.”

On a tour of the center, you will see rows of hard-shell plastic and wheeled trash bins, all immaculately clean and shining under the high ceiling lights. But the most striking thing might well be the art on the walls. Varying in quality are sculptures mounted on the brick walls along with paintings and photographs. One poster-size photo is of Ali towering over Sonny Liston after knocking him to the mat. On one wall is a photo of Ross’s extraordinarily attractive wife, lost years ago to lupus; on another wall is the same photo transferred into what seems to be a silk-screen print. Another thing one sees are rows of disposable-diaper boxes and foods from Feeding America. And, of course, water.

The fight for dignity rages on. Go Waterman! Win for all of us.