Accident Doctors and a Letter From a Storm Chaser

Hello, Matt: My friend in Florida was recently in an accident and she reported to me that her normal doctor would not see her for her accident-related injuries, that she had to see special “accident doctors.” I never heard of such a thing until I told a friend and she knew someone that had the same thing happen to her right here in sunny California. What gives? A new scam by the medical establishment? — Pat, via email 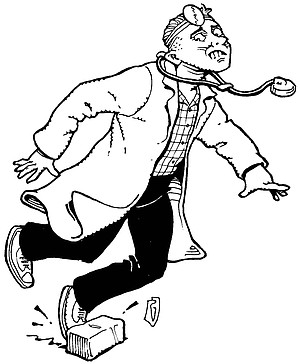 Holy whiplash, Pat! What we have here is a collaboration between natural enemies, doctors and lawyers. Oil and water? Usually. The emulsifier? Money. It seems that Florida — that nutty, nutty peninsula — is one of only 12 states that has a no-fault traffic-accident insurance system. Me tootling down the road, you staring in rearview, putting on mascara. You hit me. No harm, no foul. No need to take the case to court to decide who’s at fault. The state declares that nobody’s at fault. Your insurance company pays you, mine pays me. That’s because the state mandates each driver to carry a minimum of $10,000 PIP, personal injury protection coverage. That’s the cornerstone of the house built by doctors and lawyers. So, I’m sitting around waiting for the ten bills to come wafting in. My insurance company pooh-poohs my claim, pays me for a box of Band-Aids and some aspirin, and I’m fried. So, the doctors and lawyers know there’s ten Gs out there just waiting to be claimed by someone. Why not them? I turn to one of the armies of “accident lawyers” who advertise heavily. They’ll throw a scare into the insurer, by gum. Lawyers send me to “their” accident doctor/chiropractor. Months of treatments and lawyer meetings later, the ambulance and ambulance chasers have consumed my PIP money and I’m probably left with bills for the rest of those conferences and treatments. The PIP system was supposed to clear fault-finding cases out of the courtroom but in the process created its own particular monster.

California is not a no-fault state. Blame is placed. So, instead of PIP, the state requires drivers to carry the 15K-30K-5K minimum liability insurance to pay for any bodily and property mayhem we cause. California does have law firms and (mostly) chiropractors who “specialize” in traffic accidents and advertise themselves as such, but there’s less room here for Florida-style shenanigans. Californians can get PIP-style coverage, but uninsured motorist is a wiser buy.

As for why ordinary family-practice-type physicians would pass on treating an accident victim, well, no big mystery there. Behind every fender-bender lurks a lawsuit. What do doctors have little time for? Lawsuits. Especially other people’s. Best not to get involved in the first place. So, the tenderest of docs will pass a patient along to a colleague who specializes in aggravation.

Matt: I don’t really like your explanation about tornadoes. Everything seems okay until the last paragraph, then it goes downhill. First, I don’t really like the idea that thunderstorms need to be topped off with a layer of cold air. Maybe there’s a layer of cold air above, maybe not. Thunderstorms have no problem forming near the equator, with no layer of cold air above them. Second, the idea of “fronts” that are spinning in opposite directions makes me feel a bit queasy. You do need wind shear between the surface and aloft, which means that the winds at the surface and the winds up above should either be going in different directions or different speeds or both. But rarely are the directions “opposite.” I think what you’ll usually find is that you have the warm moist Gulf air coming in from the south or southeast, while up above you’ll have fairly fast winds coming in from the west. When you have conditions like that, you can have gigantic horizontal vortices form. But of course, tornadoes are primarily vertical, so how do things get from horizontal to vertical? Strong thunderstorms can have very strong updrafts, determined by something called “CAPE” (convective available potential energy). The updraft speed is proportional to the square root of the CAPE, and for some of these thunderstorms that generate tornadoes it might be 80 or 100 miles per hour. When that updraft hits one of those horizontal vortices, it can tilt it into the vertical and split it into two counter-rotating updrafts — yes, both clockwise and counterclockwise. Usually, but not always, the counterclockwise one will persist and the clockwise will die. If the clockwise one survives, though — it can make a clockwise tornado. Tornado rotation really has nothing to do with the Coriolis (they don’t live long enough for that), so it’s not really a hemisphere thing, except indirectly. The part where the rotating updraft (which defines a “super cell”) spawns a tornado is still a bit of a mystery, which I think you alluded to. It most likely depends on an interaction between the updraft and something called the “rear flank downdraft,” but the details are still unclear. — Jim, weather guy and sometime storm chaser