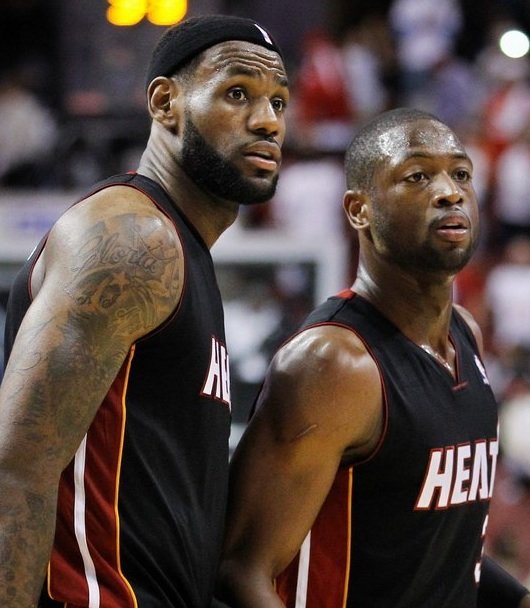 Even though we’re facing long odds, the NBA finals still have a shot at being good theater. As sports fans and drama students know, to be good theater you’ve got to have a good guy and a bad guy. The bad guy (unanimous choice) is LeBron James, who, nine times out of ten, comes through with a sloppy game and rich-kid attitude when needed. And the good guy is...well, that’s the problem. Who are you going to pick, Mark Cuban? He’s a billionaire whose team of slap-happy underdogs are way, way over the salary cap. Certainly, a man can root for Dallas on the strength of his loathing for Miami — that can be done, has been done, and if all else fails, that’s what I will recommend, but it’s not good theater.

And yet, so close. One half of the diamond is set so elegantly. Take a look at this, just for beauty’s sake: Game 2, Miami is up 12 points with seven minutes and change left to play in front of a home crowd. Dwyane Wade makes a 3-pointer, now the Heat is up by 15. Wade and James celebrate, or taunt, depending on your point of view, in front of the Dallas bench.

Now the two mighty warriors take their positions on the court and...coast. Coast is charitable; collapse is more accurate. James and Wade decide their work day is over, “Put a case of Dom Perignon on ice, honey, I’ll be there in a second,” and Miami loses the game 95 to 93.

“The game’s star players, after they have cooled off and put on their expensive suits, are brought over to media feeding [press room] for the postgame, to take questions in front of rows of chairs and cameras. LeBron James and Dwyane Wade, together always, are brought over on the back of a motorized cart surrounded by security. Everyone else walks over.”

Just got your ass handed to you, humiliated in front the world, one the greatest DNFs in sports, you’re 26 years old, made $43 million last year, and still need to ride on the back of a golf cart to get from one room to the next.

That’s a stellar bad-guy performance, and I look forward to many productive years writing about LeBron James. But, it’s not enough for good theater. Sadly, tragically even, we still have a hero vacancy.

Good theater requires a good guy. I was going to nominate Dallas guard Jason Kidd after game 2. The guy is 120 years old and looks like he plays basketball for San Quentin State Prison. Kidd has played pro ball for 17 years (five basketball lifetimes), been named to the NBA’s All Defensive Team nine times, All-Star team ten times. He’s second in all-time assists, third in three-pointers, and — the most amazing stat — he’s played 1268 out of a possible 1363 games. In game 2’s final seven minutes, Kidd guarded Dwyane Wade. Wade had already scored 36 points; in the final seven minutes he scored none.

Kidd’s good-guy qualities brought him to the edge of good-guy stardom, and then, in game 3, Dallas lost and Kidd was not brilliant. For good theater, good guys have to be brilliant and their team has to win except in rare cases when winning would put planet Earth on a collision course with star field N654A12.

Reluctantly, I turned to Dallas star forward Dirk Nowitzki as candidate for the role of good guy. Dirk was drafted by Milwaukee in 1998 and immediately traded to Dallas. Been there ever since. Ten-time NBA All-Star, MVP, and all the usual blah, blah, blah, he’s the undisputed star of the franchise. Nowitzki has been carrying Dallas on his back; he scored the last nine points in game 2, made every free throw (24) he’s tried in the series, but then missed a game-winning 16-foot jumper as time ran out in game 3.

As I write this, Miami has won two games, Dallas one game. Yes, yes, you want to know who’s going to win the series. Okay, if you want the most reliable prediction, go to a bookie, in this case Covers.com and Sarah J. Phillips. I quote, “When the series is tied 1-1, roughly 74 percent of teams that win game 3 go on to win the Series.”

So what? What care we about ugly, dirty money when there is a greater question on the table?

Who is the good guy?