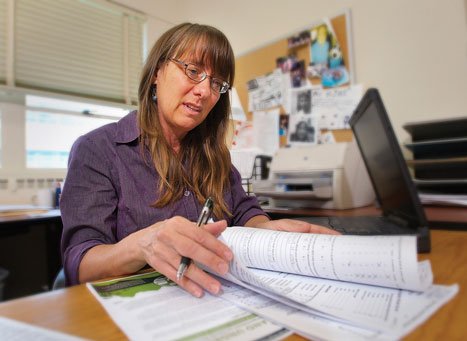 The worst thing about the job, Blanca tells me, is the chaos. “It’s not being able to control the influx of clients. It’s happening so fast that before I’m finished with one application I have to drop it and go to the next person who has walked in.” Blanca, whose name has been changed to prevent retaliation, is an eligibility worker in the County of San Diego’s Health and Human Services Agency. She works in one of the department’s nine Family Resource Centers, processing intakes and renewal applications for CalWORKS (financial aid for needy families with children), food stamps, and Medi-Cal.

Three years ago, Blanca’s job changed significantly as Health and Human Services “reengineered” its system for providing assistance. A major instigator of the change was criticism that the county was providing aid for a much lower percentage of those eligible than other California counties were.

Before the reengineering, Blanca had a caseload of clients whose records she kept in files at her desk. She made regular appointments to update their cases, took their phone calls, made sure they followed the requirements their benefits called for, and followed the ups and downs of their struggles. It was the kind of work she sought upon first applying for the job.

After the reengineering (officially known as Business Process Re-Engineering), county eligibility work became more mechanized. For Blanca, that has meant performing a limited number of tasks and being relieved of managing a large number of cases. Her job has been redesigned from “caseworker” to “task-based worker.”

Think of the old Charlie Chaplin silent film Modern Times. Instead of being able to take pride in making a car, Charlie is constrained to using two large wrenches to turn bolts that go by him on the assembly line. And the process drives him nuts.

Many eligibility workers say that their jobs, too, are making them crazy and that it is getting harder to feel good about what they do. They argue that reengineering has weakened efforts to assist the county’s poor. They also say that Health and Human Services administrators don’t want to hear about the problem, despite promises at the onset of reengineering that bosses would seek input from workers on how the change was going.

During the spring semester at San Diego State University, 13 sociology master’s degree students designed a survey to study how, in the opinions of the workers, reengineering is working. The study was the primary requirement for taking professor Jill Esbenshade’s Field Practicum class. The county allowed the students into ten sites, including all of the Family Resource Centers, to administer surveys during workers’ lunchtimes, break times, and after hours. Each student went into four of the centers, resulting in 342 completed surveys, 264 by eligibility workers and the remainder by clerical personnel (21 percent) and supervisors (2 percent). In addition, each student conducted at least two one-on-one interviews with eligibility workers who volunteered to give them. Twenty-seven interviews were conducted. Although the interviews elicited provocative stories and feelings about eligibility work, the results of the study were based on the surveys and on analysis of data the students obtained from the county and state through California Public Records Act requests. 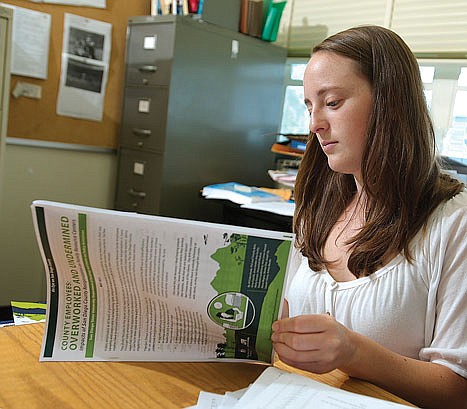 Lauren Tracey is 1 of 13 students who worked on the study.

The picture that emerged was published by the Center on Policy Initiatives in a 30-page report entitled “County Employees: Overworked and Undermined.” Before reading the report, I sat down for a chat with Jill Esbenshade and three of her students, Venoosheh Khaksar, Lauren Tracey, and Ashley Wardle. The students told me they took the class for an opportunity to apply their graduate studies to a “real world” problem. That problem starts, they learned, from insufficient staffing. Whereas CalWORKS and food stamp applications went up 234 percent between 2001 and 2010, the ranks of eligibility workers increased 1 percent. The failure to staff adequately seems to have led to problems in either approving or denying aid to clients in a timely manner. The students discovered a 2009 U.S. Department of Agriculture review of the county’s reengineering that found “high rates of error in application processing.”

There are three culprits in the reengineered system, the students told me. The first is the computer software, called CalWIN, which replaces workers in granting or denying cash aid and assists workers in determining eligibility for food stamps and Medi-Cal. Workers reported in the surveys that the computer program has failed to improve accuracy and that often the system is down. I later hear from a worker who wishes not to be identified that the software program has been known to both grant and deny the same application, leading to client frustration. 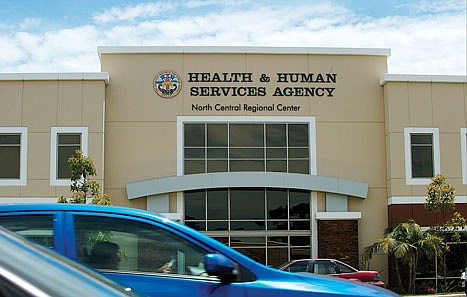 Seeking greater efficiency, the County’s Health & Human Services Agency “reengineered” its systems away from case work and toward task work.

But can clients call the workers they met and who opened their cases? Not anymore. Even answering phone calls is specialized. Since late 2009, client calls have been routed to ACCESS, an automated call center, where workers have been trained to deal with clients on the phone. Only as a last resort will a complaint be assigned to the worker with whom the client first applied for aid. Workers at the Family Resource Centers are told they are not to take calls from clients but to transfer their voice mail messages to the call center. On at least two days last week, callers to the phone center were told they could not speak with anyone “due to unexpected high volume.”

Finally, reengineering has taken client records away from the desks of workers, where paper documents were kept. Although the files could become bulky, they provided immediate access to information that workers needed. But now, birth certificates, Social Security cards, and other key documents are scanned by the Document Retrieval System (DoReS) and can be seen only on a computer. Workers say the system often does not contain the documents they want to see. At first, the case files were still kept in the buildings where workers were stationed. But eventually the documents were moved to a central location.

“The county touts its [reengineering] as having saved $33 million,” said the students’ teacher Jill Esbenshade, “and that it produced a 39 percent rise in productivity from early 2008 to the end of 2009. But the plan did not even go into effect in the system right away. That greater productivity was due to increased client load, not to [reengineering the work processes]. The same number of eligibility workers had to deal with many more applications for aid due to the recession and widespread unemployment. Then, last year, the county started an advertising program to boost its food stamps benefits to those who could qualify. But it still hasn’t hired more eligibility workers to accommodate the increased demand.”

One wonders whether it finally dawned on the board of supervisors that the federal money behind food stamps might benefit the whole county, not only those who receive the aid. A 2010 U.S. Department of Agriculture study maintains that $1.00 of food stamps has a $1.79 “multiplier effect” in a local economy, increasing both economic activity and jobs.

The same thing applies to cash aid to families with dependent children. The San Diego State University students’ report might even provoke suspicion that, in order to bring in federal dollars, the county is becoming too generous. A section in the study devoted to eligibility supervisors made me perk up. “Many workers note that there is a lot of pressure now to approve cases,” according to the report. “One-third of survey respondents say that supervisors at least sometimes tell them to grant cases they feel do not qualify, and 6% report that this happens always or most of the time. Workers express grave concerns about the accuracy of determinations, with so much pressure to meet the granting deadline and to raise numbers. Workers describe rapid last minute determinations without attention to detail, indicating that by saving money on staff, the taxpayer may be losing money on ineligible applicants, or that applicants who do qualify may be wrongly denied in the rush.”

“Overworked and Undermined” highlights lack of worker accountability as a major failing of the task-based approach to determining client aid. Workers can make changes to any case, but they are supposed to write notes on CalWIN to explain what they’ve done and why. They do not always write them, meaning the next worker who opens the case has to figure it out. The latest worker to look into a case is also responsible for fixing errors previously made. And before that is done, another applicant walks in the door.