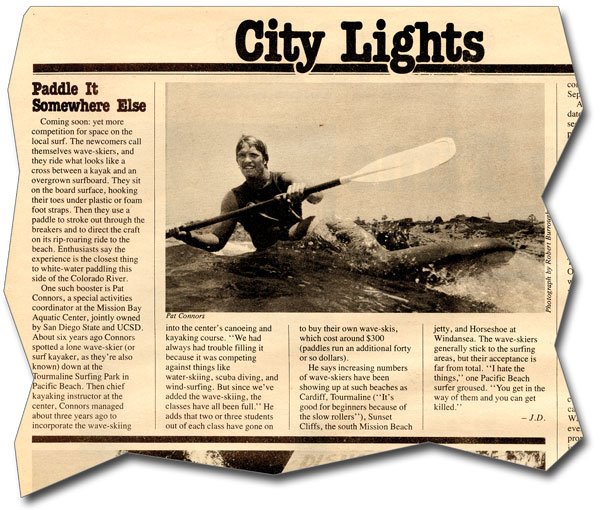 Thirty-Five Years Ago
The popular theme in this season’s batch of grievances is my alleged negativism. In a typical case, this accusation comes from someone who advocates love, fun, coolness, and peace, and who then demands my head on a platter. If I wrote about movies in the same terms these sunny positivists write about me, they would truly have something to squeal about. Anyway, the charge of negativism draws from me an immediate I-doubt-it-very-much reaction. Which is another point for the prosecution, I suppose (there he goes again, naysaying).
— “NAYSAYING,” Duncan Shepherd, June 10, 1976

Thirty Years Ago
Coming soon: yet more competition for space on the local surf. The newcomers call themselves wave-skiers, and they ride what looks like a cross between a kayak and an overgrown surfboard. They sit on the board surface, hooking their toes under plastic or foam footstraps. Then they use a paddle to stroke out through the breakers and to direct the craft on its rip-roaring ride to the beach. Enthusiasts say the experience is the closest thing to white-water paddling this side of the Colorado River.
— CITY LIGHTS: “PADDLE IT SOMEWHERE ELSE,” Jeannette De Wyze, June 11, 1981

Twenty-Five Years Ago
Jerry Coleman is as nice a fella as you’d want to meet, but more importantly he serves as a living inspiration to people who dream of becoming things that they have little or no aptitude for. Coleman has established a comfortable career for himself at a job that requires two skills he simply does not possess: a facile command of his native language and an ability to translate quickly an observed activity into an accurate spoken description.
— “THE ONLY STUPID SPORTS QUESTION MAY BE THE ONE YOU JUST ASKED,” Stephen Heffner, June 12, 1986

Twenty Years Ago
Tuesday is the day of the week most difficult to bear. Mondays have the anxiety associated with dread, with beginning another week of work. On Tuesdays, the anxiety is absent and only the tedium remains. I think of Tuesday as a day when I long for the feeling of stone, the texture and substantialness of a Henry Moore sculpture.
— CITY LIGHTS: “SO CONCENTRATED THAT IT CRYSTALLIZES,” M. Corinne Mackey, June 13, 1991

Fifteen Years Ago
Black’s Beach, the “world’s largest nude beach,” as it is commonly billed, it may come as something of a surprise to many San Diegans is officially — legally, technically, formally — a non-nude beach. Clothing is not optional: It is required. A $20 citation could be dropped in your lap the minute your buns or boons or booty are exposed. I had heard it had a shifting legal status, but not until I checked into the matter did I find out that, despite the fact that nakedness is everywhere in sight there, nudism has been banned since 1977.
— “LAST EDEN,” Alexander Theroux, June 13, 1996

Ten Years Ago
[S]itting atop the sushi counter was a spiky globe the size of a grapefruit, a maritime hedgehog waving its purple-black quills as if to bid me in. The next time I saw it, it was sitting on a bed of crispy white shreds decorated with green herbage.... Over these sat two golden-pink lobes, lightly sprinkled with crunchy black roe. They were as exquisite as I’d hoped. (Yes, I ate the sea urchin; a beautiful mindless invertebrate died for me. But if I hadn’t eaten it, that delicious lobster on your dinner plate would’ve gotten it first. That’s a big reason why lobsters taste so good — they’re total uni gluttons.)
— RESTAURANT REVIEW: “FISHERMAN FRESH,” Naomi Wise, June 7, 2001

Five Years Ago
Daisy was 42 days old when, sweet and dopey from shots the day before, we brought her home. She was 43 days old when she discovered that biting — especially my paper-skinned mother — was more fun than anything we had to offer.... She hated to be held, hated the leash, had meltdowns for which my father gave me leather gloves he’d used to chop wood. Housebreaking? Ha!
— “WALKING MISS DAISY,” Frances Kuffel, June 8, 2006