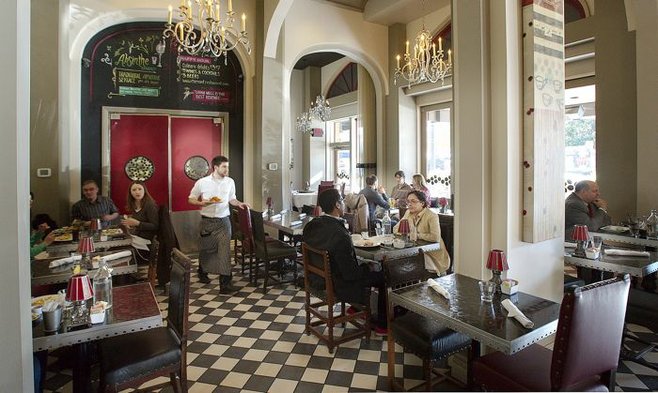 Currant, Now As Then

Currant has become a different restaurant since I reviewed it three years ago, with all-new management and chef. I liked it then, and once we hit the main courses, I like it now. Chef Walter Manikowski, who arrived about a year ago, won plaudits in Santa Fe, then moved on to head the kitchen at Dussini (the failed midscale remake of the Old Spaghetti Factory).

The dining room remains enchantingly faux-French, even if it’s something of a mashup between a brasserie, a chic bistro, and a fancier restaurant: on the one hand, there’s a brasserie’s black-and-white tiled floor; on the other, gauzy draped fabric and fancy-dancy chandeliers that provide sufficient, gentle light to read the menu and actually see your food. (How cool is that?) The bar is well separated from the dining room, keeping the noise level conversational, and the soundtrack, playing softly, consists of tasty jazz vocals from the ’40s and ’50s, with plenty of Billie Holiday in the mix. The ambience is vaguely hip — not today’s “hip” but an older, mellower version, a sly evocation of bohemian Paris, ranging through the ages from Modigliani’s WWI–era art crowd to the Juliette Greco and Charles Aznavour era of the late ’50s.

The diners are an eclectic lot, as you might expect at the restaurant of a midpriced downtown hotel next to the Greyhound station. Nobody looks as if they just schlepped off the ’hound, but nobody’s flashy either — business clothes, at best.

Coincidentally, we were seated in the same corner booth as the last time I ate here. This outing, I chose one of the tall leather-padded chairs while Sam and posse newcomer Todd took the banquette. I found the chair comfortable, but Brian, who is tall and slim, hated it — its center of balance didn’t match his.

The starters array is mainly a list of San Diego clichés — two soups, Caesar salad, wedge salad, house salad, fried calamari, plus tempura green beans, and a garlic-inflected version of Tater Tots. The pro forma onion soup gratinée doesn’t hold a candle to the previous chef’s meaty version with short-rib pieces and a deeply beefy broth. The “soup of the moment” (their name for the soup du jour) was a heavy potato and white-cheddar soup, transformed from blandness to comfort food by plentiful crisp bacon squares. It’ll eat up your appetite, but it’s sneakily seductive on a cold, wet night.

From the “house specialties” list, my tablemates were curious about the flavored “popcorn of the moment.” It was merely dry lukewarm popcorn, mixed that evening with prosciutto and (somewhere) feta, a mindless nosh for beer-bibbers at the bar. (I didn’t include it when averaging up the star rating. Cheap, dumb, not fit for the dining room.)

Another house specialty, an appetizer of Calamari Provencal, also seemed like ballast for beer, albeit tastier. You can choose your spice level, one to ten. Our waitress (a blonde named Tiffany) warned us that it ran hot: “Five equals seven.” Five was fairly fiery, indeed, but to my disappointment, the squid were batter-fried, foiling hopes of a genuine Provencal sauté. To Brian’s disappointment, the sauce (tomatoes, capers, kalamata olives, red pepper flakes, and, probably, Tabasco sauce or its like) had soaked in, turning the batter soggy.

Thickly sliced ciabatta bread appeared mid-course, accompanied by individual saucers of undistinguished herbed olive oil. The bread really should have come first, as there was something of a wait for our starters. “But this is only Wednesday,” Todd assured impatient Brian. “They don’t have a horde of cooks in the kitchen like on the weekend.”

The quiet weeknight proved a probable advantage in the quality of the main-course cooking. For instance, we ordered our heritage-breed Duroc pork chop “fairly rare.” “The chef recommends medium-rare,” said Tiffany, returning from a consultation in the kitchen. “We didn’t mean bloody-rare, like steak, just rosy-pink, not dried-out white,” I said. “We’re not scared of trichinosis!” Brian added. “Besides, there’s no trich in commercially raised pork,” said Sam. “Least of all in slow-growing heritage breeds, which aren’t ‘factory pork,’” I said. And mainly pink (but rosy and juicy at the bone) was just how our savory chop arrived, with a harmonious array of moist, pleasantly chewy red-wine risotto, sweet Julian apple slices, and mushrooms (the menu says chanterelles, but by looks and taste they were more likely creminis), and a Cabernet sauce.

For a hanger steak with thyme fries, we specified “very rare,” and so it came, with spectacular results. The hanger steak (sometimes called “butcher’s cut,” because butchers would take it home for themselves and their families) is a flap of muscle that literally hangs inside the cow from the diaphragm, under the loin. Overcooked, it’s tough; most folk recipes call for an acidic marinade to tenderize it for, say, Mexican arrachera. Treated right (cooked rare or rarer), it’s potentially tender, like its close cousin, skirt steak. And tender it was, with a profound beefy flavor equivalent to grass-fed rib-eye. It was hugely satisfying, beating out most steakhouse offerings. It came with both a tangy, slightly oversalted sauce bordelaise (red wine sauce) and a side of delicate sauce béarnaise, the ne plus ultra for grilled beef. On the side came a welcome heap of wilted young spinach, more mushrooms, and a pile of fine thin fries that were crisp-tender, very salty but in a good way, sprinkled with just enough thyme to add a wisp of herbal flavor.

A rosemary-brined half a “beer can chicken” was flawless too, all parts crisp-skinned and tender, with porcini and leek gravy and decent, ungimmicky mashed potatoes.

And with our “mussels and fries” from the house specials list, we lucked out big-time. The mussels were too good, and, when questioned, the charming maître d’ told the story: Much as I love local Carlsbad mussels (the restaurant’s usual source), that night’s supply came from Prince Edward Island, off the Nova Scotia coast, and to a former East Coaster, instantly recognizable by their dense, juicy texture and rich taste (not exactly buttery — more like a great Spanish extra-virgin olive oil). I bypassed the safer sauce choice of a standard white-wine tomato mixture to gamble on the “French curry sauce,” knowing that the xenophobic Gallic idea of curry bears little resemblance to anything Asian. Indeed, this was a classic French rendition, most likely made with cream and white wine, and just enough mild curry powder for depth. It was perfectly matched to the assertive sensuality of the PEI mussels. More of the airy thyme fries were scattered on top, never sinking to sauce-level.

Just as my friend the Lynnester is on a secret search for the best fries, I’m a secret collector of mac and cheese — forbidden food for low-carbers and therefore all the more tempting. We ordered a side of it. It’s very creamy and soothing, made with mild white cheddar and large, soft macaroni — a matter of taste, but I warmed to it as I ate.

After all this, we didn’t want or need dessert, but several items on the list were tempting. We chose the lemon tart. The pastry was rather heavy, but the lemon curd was satisfying, and the meringue topping was ethereal. I was also sorely tempted by a goat-cheese cheesecake — but enough is enough. The espresso was a bit too bitter.

Our food-only costs were about $32 each; skip appetizers, and you could easily get away with less. I can’t call the food very creative — it’s more like classic bistro grub (as well as pub grub) — but the experience of eating at Currant makes for a good time. The personable maître d’, well-made entrées, affordable wines, decent lighting, and un-rackety sound level are all easy and relaxed. I recognize my secret prejudice in its favor — it engages my undying inner teenage beatnik, the feeling of being comfortable in a wannabe Parisian ambiance of quiet retro jazz, bistro decor, and absinthe drippers. Even if it’s make-believe, I’m more than willing to partly suspend disbelief for an evening, so long as the cooking is nearly as tasty as the atmosphere.

Next week, I’ll begin alternating with two other devout foodies. I’m thrilled to say there’s confirmation that Kirk K. (of mmm-yoso, my favorite local foodblog) will be joining us. His tastes are wide ranging, with particular expertise in Asian cuisines, so look forward to better coverage of the treats in the areas of Convoy Street, Linda Vista, Kearny Mesa, et al.

The second calls herself “Emma Goldman,” a local writer and a foodie — but this is the first time she’ll be marrying the two interests. She’s a downtowner, a married mother of one picky eater, and instead of following standard review format, she’ll be creating a format of her own. I look forward to seeing what she’ll do. ■