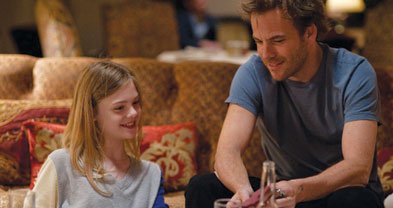 Most movie critics feel compelled to draw up an annual list. A few years ago, I was amused when Roger Ebert complained that list-making has become trivialized — Roger has shoveled critical coals into the Top Ten furnace since 1967, and this year he even apologized for overloading his list.

But I see his point. In the Web era, one list can detonate the creation of a hundred others. And the variations are infinite: care to know about the ten best Laundromat scenes in Polynesian cinema? Some movieholic grind is eager to tell you. And when a movie shows up on year-end lists, in critics’ awards, and in contest nominations, many people who didn’t care for a particular film decide that they must have been wrong. A faddish consensus takes hold.

But, really, whose taste is best? Your own! These are the movies I liked the most. This list includes more foreign films than any wrap-up I’ve done, and although it’s a top ten, it’s in alphabetical order because no film is quite No. 1.

1) A Film Unfinished. Yael Hersonski’s harrowing disinterment of a Nazi propaganda film made in the Warsaw ghetto. It opens a Pandora’s casket of questions about motive and delusion and brings forth the Holocaust like nothing else in recent memory.

3) The Ghost Writer. The resident phantom is Hitchcock, haunting Roman Polanski’s beautifully made, completely adult thriller. A gullible writer (Ewan McGregor) is drawn into a paranoid fog of state secrets that implicate the Bush-Blair bond and even Polanski’s own legal troubles.

4) The King’s Speech. The shy new king, George VI (Colin Firth), must learn how to control his stammer as Hitler harangues, Churchill growls, and destiny calls. Tom Hooper’s film, more human than royal, achieves a very English eloquence in the alliance of Firth with Geoffrey Rush as his speech therapist.

6) The Secret in Their Eyes. From Argentina, un tango de Borges y Hitchcock. In Juan José Campanella’s mystery, Ricardo Darín deals with the past, a rape tragedy, a sexy judge, and corruption. Almost too many plot threads, but they are richly woven.

9) Wild Grass. More shades of Hitchcock, as if filtered through Tati and Godard but mainly old master Alain Resnais (now 88). He never falters in this odd, tonic comedy about the winking absurdities of time, chance, flight, fate, and film.

10) Winter’s Bone. A gnawing drama about a brave Ozarks teen (Jennifer Lawrence) facing bad choices in a poor, ignorant land. Her visit to a swamp is unforgettable, in Debra Granik’s film about the cost of isolation and bitter blood.

Crowding in right behind: The American, The Art of the Steal, Cairo Time, City Island, Easy A, Exit Through the Gift Shop, Farewell, Father of My Children, Fish Tank, 44 Inch Chest, Greenberg, Harry Potter and the Deathly Hallows, I Am Love, The Jazz Baroness, The Kids Are All Right, Mother, My Dog Tulip, No One Knows About Persian Cats, Rabbit Hole, The Secret of Kells, Shutter Island, Toy Story 3, Vision, Waste Land.

Why not The Social Network? In David Fincher’s coy, verbose, but insufficiently lucid treatment of the founding of Facebook, star Jesse Eisenberg remains (expertly) an opaque and irritating enigma. His character’s slippery games with “friends” inspired this movie’s slippery games with viewers.

Animation excellence: The Secret of Kells.

Some movies cast a soft, encroaching spell. Consider Sofia Coppola’s Somewhere, which was given the top prize at the Venice Film Festival and is not, like The Tourist, a cement gondola. Raised in the biz, director and writer Coppola looks into the shallow, glimmering depths of it. In Somewhere, she maintains a suspense of suspended judgment, a palm-leafy mood of compassionate attention, and a hushed, observant style reminiscent of Jacques Demy’s L.A. excursion, Model Shop (1969).

Coppola infuses the Chateau Marmont, a famously hip retro-nest in L.A., with the drifty grace and jaded options of the Tokyo hotel in her Lost in Translation, with the deluxe ennui of her Versailles in Marie Antoinette. She follows film star Johnny Marco, whom we first see zooming his Ferrari in pointless circles. Johnny is played by Stephen Dorff like a stubbled, depleted Jack Nicholson Jr. He will not have Jack Sr.’s career arc.

Attendants hurry to serve, publicists coo adoringly, pole dancers draw his dazed gaze, unfamiliar women offer themselves. Though no dummy (he even plinks a Goldberg variation by Bach on the lobby piano), Johnny is bored by his work, by doting admirers, by dumb questions at a Four Seasons press event (this is not satire). Even sex is becoming a chore, though it includes one very funny sexual moment.

Polite, gentle Johnny is becoming a mirage, his celebrity a forlorn distillation of “whatever.” Johnny drinks, and there is a distant echo of dissolute Norman Maine in A Star Is Born. His wife has left, and one person sustains Johnny’s interest. His daughter Cleo is played by Elle Fanning, 12, with a marvelous smile and no buzz of vanity. Cleo can make eggs Benedict, and her dancing on ice captivates him, but she is still a kid at heart. They spend playful, lounging time together, and while sensing that Dad is no anchor, she is grateful for his attention and bemused by his fame.

In pensive, long takes, Coppola uses Harris Savides’s strong but casual, not overly composed camera work to make the link of father and daughter the purring pulse of a film that never scores points, condemns, or condescends. Some will find this stream of lucid snapshots boring, but it captures a life and can cast a spell.

Mea culpa maxima: I apologize to all Cary Grant fans for not including him in my mention last week of Great Depression movie “cherries” (delights). Cary, whom I was lucky to have met, was the whole cherry pie.

I need to check out "Mademoiselle Chambon," "The Secret in Their Eyes," and "Agora" which I've been interested in but haven't gotten around to watching on DVD yet.

As for performances and other favorite films, I'm still compiling my lists, but a few noteworthy ones: Kirsten Dunst in "All Good Things," Adam Scott in "The Vicious Kind," Michael Caine in "Harry Brown," and the lovely duos of Jim Carrey and Ewan McGregor in "I Love You, Phillip Morris," and of Martin Landau and Ellen Burstyn in "Lovely, Still."

I've just seen Somewhere... And I'm really disappointed. As much as I liked Lost in Translation, I found this one just plain boring. It's pretty thin. Everything is highly predictable, it's all "cliches". Every man able to be self-conscious - no need to be an actor - who realize he had messed up his life would like to disappear in the desert too. It's well done, but just boring...

Finally got around to seeing "Agora" on Monday, and I liked it for the most part. It felt a little long, but the visuals and the performances (particularly that of Rachel Weisz, Oscar Issac and Max Minghella) made it worthwhile.

Also saw "Somewhere" last night, and at first I wasn't sure what to think of it. I liked the simplicity of it, while Doriff and Fanning were quite charming. However, I kept feeling like something dramatic was going to happen, when nothing did, but that might've been the point of this type of film. Overall, an interesting film.

MADEMOISELLE MOVIE SUCKED. SO DID SOMEWHERE. CRITICS THAT LIKE THESE MOVIES THAT ARE BORING MAKE IT HARD TO LISTEN TO CRITICS