Ever wonder what it’s like to sit at a poker table with a $2,000,000 pot? Not watch the game on TV or read about it on the internet, but sit at the table under insanely bright Fresnel lights, feeling the greed and fear, hearing chips shuffle and cards whoosh as they come out of the dealer’s shoe.

Unhappily, you’ll never find out and neither will I. Second best, at least for me, is having an informal conversation with a person who sat at a $2,000,000 table. I’ll get more truth this way; people say things informally that they won’t say in an interview. Third best is having a friend who’s had an informal conversation with the $2,000,000 player.

Introducing a man I’ll call Carl. I’ve known Carl for decades; he’s the younger brother of my oldest friend. Carl sits at a metaphorical $2,000,000 table in that he has a life you and I will never know. He is rich, he’s always on an airplane, he makes deals in exotic places and on every continent. Or, to explain it another way, Carl can make a phone call to an embassy or corporation and get through to the big dog. I should add that I have no idea what he actually does or what those deals actually consist of. I’ve never asked. He is a private person.

Picture this: Carl is on an airplane (first class, of course), maybe he’s flying from L.A. to Dubai, maybe the plane is an Airbus A380 double-decker jumbo jet. Carl is stretching his legs, wanders into the cocktail lounge...perhaps he orders a scotch and falls into conversation with this guy.

Follows is Carl’s email about that conversation. I’ve changed a few words to ensure his privacy and straightened out two or three sentences.

Talked to a guy, Sean something, on the flight over to Dubai. He was with Haralabos Voulgaris, who appears on TV in high-stakes poker shows. Talked to Voulgaris a bit, too. He says Phil Ivey (winner of eight World Series of Poker bracelets) is easily the best cash-game poker player on the planet because he has an eerie ability to read people. He said it takes 10,000 hours of play to have a shot at being world class.

This guy, Sean, has also appeared on high-stakes poker TV shows and loves to talk. His main business is betting on basketball, and more specifically, the over-under line. He has created a mathematical model for this and continues to refine his logarithms. He has a smart programmer and a brilliant mathematician working for him. Sean is, obviously, a very talented guy. I asked him how big a factor individual refs are in his calculations. He says he doesn’t place bets until he learns who the refs are, as knowing refs gives him a two-percent edge. He hires people in India to watch tapes of every game and log ref calls for his model. He makes five to ten million a year doing this. His earnings are limited by finding reliable illegal and legal bookies who will pay him. He’s also limited by bet size. If he bets too much, his wager moves the market and eliminates his edge.

He likes basketball because there are lots of games and halves and there are not many people doing what he is. He says if betting were legalized he could make a vast fortune, as the market would be much larger.

I asked him about baseball and football. He says the statistical analysis of baseball has already been done and it’s on the internet. He said the problems with football are too few games and fluke plays having such a big impact on outcomes. One fluke play can mean the game. In basketball, there are generally four fluke plays per game, and they don’t affect his ability to get a statistical edge. 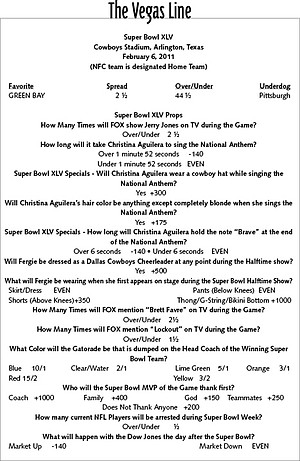 You’ve got to feel outrage after reading Carl’s report. Outsourcing white-collar crime, good American jobs, the kinds of jobs that allow American criminals to send their children to college, outsourcing that work to a gaggle of foreigners. These people hunker down before ancient black-and-white television sets watching VHS tapes of every NBA game ever played.

They’re making strange marks on stolen hotel stationery and talking to each other real fast in a foreign tongue. And it’s not your recognizable foreign tongue such as French, Spanish, German, or Italian, but a for-real foreign tongue, one that sounds like 1000 demons fighting over the last rack of human. And not one of them has played even one game of basketball. This is so terribly wrong.

Then there is the customer-support situation...