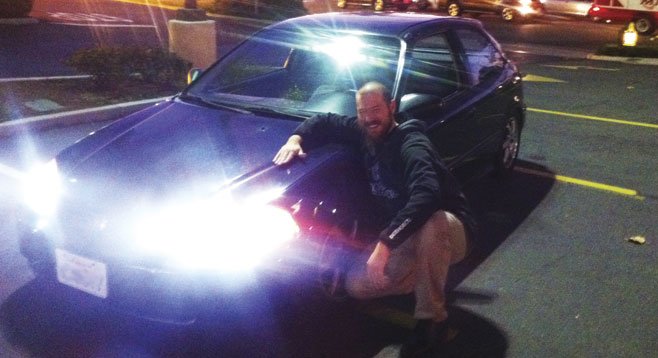 How’s your commute? I commute from Mira Mesa to Mission Gorge.

Cheapest Gas? I don’t use cheap gas. Only 91 octane, only Chevron.

What’s wrong with your car? No cage and no turbo! Just needs a few more modifications to make it really sweet.

What do you listen to while you drive? Recently I’ve been conflicted between rap and some old-school stuff. Mellow stuff to calm down my road rage, oldies like Rick James totally keep me calm.

Do you use your cell phone and drive? I haven’t owned a cell phone for 11 years and that’s just the way I like it.

Any good hitchhiking stories? I’ve never picked one up before but that’s not to say that I wouldn’t…

Tickets? Total, I’ve gotten something like 9 to 12 and a suspended license but in the last year only 3. Two for speeding and one was a referee ticket for my illegal motor swap. Everything has been sorted since then, so it’s legal now.

Accidents? I totally got T-boned by my friend’s mom in my AE86. And can you believe this? She was more concerned about the damage to her Explorer than to my car. I did cross a double yellow line, and I did do an illegal U-turn so I guess you could say the accident was my fault but she had plenty of stopping distance!

Where do you typically experience the worst traffic in San Diego? Anywhere south of the 8 on the 15 and north of Miramar Road on the 15.

What is your favorite drive? I’d have to say Scripps Poway Parkway. Lots of straightaways with no place for cops to hide.

Your best ShortCut? When headed to Scripps Poway Parkway it’s much faster to get off the 15 on Pomerado and cut over east. Saves a decent amount of distance but if there’s traffic it could save you serious time.

What is your dream car? Oh man, I think overall I’d have to go with the current Mercedes AMG C63 DTM race car. They look sweet, they’re super fast, only problem is it’s nowhere near street legal.

What is your most interesting driving related experience? I’ve been pulled over so many times and it’s always an interesting experience.

Do you use any shortcuts in real life? Smoke weed every day. Seriously, weed makes everything better! I smoke probably a gram of medical marijuana per day. My one rule, however, is never smoke and drive. That’s just a recipe for a wrecked car and a crazy DUI. Smoke once you’re off work, home and safe, is all I can say.