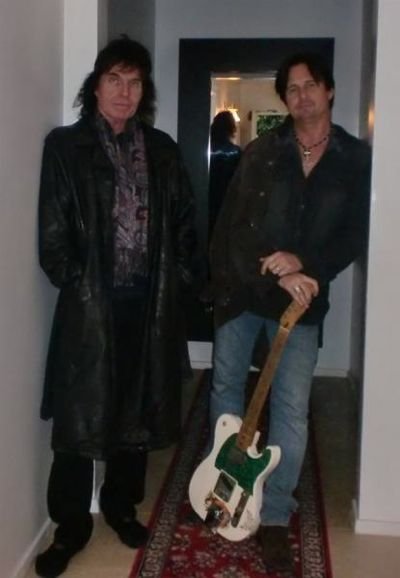 “We’re trying to make some decent money doing a Black Keys kind of thing,” says Rick Harchol, one half of the relatively new duo C&H, featuring electric guitar, light drums, and a loop pedal. Since the Black Keys’ Grammy wins in February, Harchol says, “We’ve been experiencing an overall excited interest in what we’re doing, as opposed to a whole band, with lots of mouths to feed and excessive volume.”

Based in Poway, Harchol and partner Jimmy Carslake (who lives in La Jolla) both sing, making for an economical Keys-like act that already lands several paying gigs per month.

Not that a two-man band is easy to pull off. “Jimmy has only a snare and ride cymbal for the drums, which makes it hard to be creative. With my guitar as the only full instrument, I’m using a loop pedal on the fly. Nothing is canned to create rhythms, bass, and sometimes percussion. This setup makes me vulnerable, requiring me to close the loop in perfect time; if I don’t, we can get hung out to dry. Plus, Jimmy has to listen closely to the loop as I’m building other elements and play in time with it or it throws me off.”

C&H is recording a debut album planned for summer release. They appear Thursday, April 7, at Zenbu on Fay Avenue in La Jolla, and Friday, April 8, at Rimel’s Rotisserie in Cardiff.

More on C and H

C&H just uploaded their song "Mellow Down Easy" to the Reader site -- free spin on their page at http://www.sandiegoreader.com/bands/c-and-h/