Eastbound in the right lane of Highway 52, the San Clemente Canyon Freeway, you can look down upon a long, slender, almost unbroken swath of natural vegetation: massive sycamores, stately live oaks, swaying willows, climbing vines, and tangled shrubs. This is one of San Diego ­County’s best examples of riparian, or stream-loving, vegetation. Only about 0.2 percent of the ­county’s land area consists of this type of vegetation, and some of the best of that is represented ­here.

Much of San Clemente Canyon and several of its steep finger canyons are included in the boundaries of Marian Bear Park, an area set aside by the City of San Diego as natural open space. Facilities include parking areas, picnic tables, and rest rooms off Regents Road and Genesee Avenue, and resting benches elsewhere. If you can manage to visit the park early on a Sunday morning, you will be rewarded with near-silence and plenty of audible birdsong. Otherwise, on a typical day, ­you’ll get plenty of white noise from the freeway traffic ­nearby.

There are several ways to enter Marian Bear Park, but the principal trailhead lies along the east side of Genesee Avenue just south of the 52 Freeway. From this gateway, the main trail, an old roadbed that today is essentially a trail of variable width, goes both east toward Interstate 805 and west toward Interstate 5. The trail weaves back and across the currently sluggish canyon stream, accompanied much of the time by a canopy of sycamores and ­oaks.

The east end of the park (between Genesee Avenue and Interstate 805) offers the prettiest vegetation, the densest shade, and the biggest infestations of poison oak — which lie mostly away from the path in great tangled masses among the trees. Beginning about October, the leaves of the poison oak turn bright red in pleasing complement to the evergreen live oaks and the yellows and oranges of the sycamores and willows. By wintertime, the sycamores lose their leaves entirely, and the poison oak plants appear as tangled masses of sticks — nearly as potently dangerous as when the leaves are ­present.

Here and there, side paths rise from the canyon bottom, going north or south to connect with residential streets in the surrounding neighborhoods of University City and Clairemont. As well, ­there’s a sketchy path on the west end of Marian Bear Park that connects with the Rose Canyon open-space area to the ­north.

This article contains information about a publicly owned recreation or wilderness area. Trails and pathways are not necessarily marked. Conditions can change rapidly. Hikers should be properly equipped and have safety and navigational skills. The Reader and Jerry Schad assume no responsibility for any adverse ­experience. 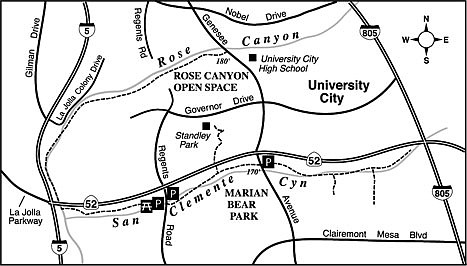