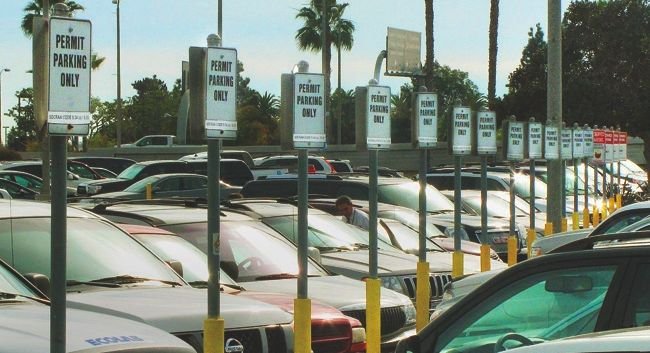 Who gets parking perks at Lindbergh Field

Denise Ducheny, Bonnie Dumanis among many others

Airport parking at San Diego International is expensive — unless you’ve snagged a free pass, that is. For most of us, it’s $4 an hour, $21 maximum for 24 hours; long-term parking (three days to a month) runs from $10 to $30 a day, depending on how close you are to the terminal. However, County-based politicians and other presumably “important” types needn’t budget for parking on their way to junkets and such.

Who gets to park free and why? Apparently, it all boils down to “eligibility.” According to the San Diego County Regional Airport Authority, the perk originated with the Unified Port of San Diego, which, until the airport authority was created in 2003, handled operations at the flyway known to most locals simply as Lindbergh Field. Katie Jones, head of public and community relations for the airport authority, states that the preferential treatment is authorized by the authority’s “Policies,” a document originally drafted by the port and adopted without substantial change.

When I asked Jones how one might go about obtaining an airport parking pass, she told me that permit-holders must fill out an application, a one-page document that states, “Airport Parking Cards are for official business only, used by government, diplomatic and law enforcement officials, airport contractors and vendors.” It also contains boxes to be checked by the authority — depending, perhaps, on how vital one’s travel is — that specify the “level of access” (the cryptic “master access” or “anti-pass back”) and lot location relative to the various terminals. Has anyone been denied a pass? “We’ve never had to reject an application,” says Jones, “because only eligible people know about the applications.”

According to the airport honchos, one of the “principal objectives” of the free parking program is to “support local government officials in recognition of their responsibility in representing the interests of the Airport.” That’s what it says in the first paragraph of Section 9.30 in the “Policies.” But how does the airport benefit by granting free parking to certain people? The airport authority doesn’t have a substantive answer.

Whatever the value to the airport, free parking seems of palpable, practical benefit to the chosen few. Denise Ducheny, recently termed-out California state senator for the 40th District and newly appointed member of the California Unemployment Insurance Appeals Board, has had a permit for around the past 15 years — excluding 2 years when she was out of office. “The airport gives it to us as a courtesy and a convenience,” she said in an interview last month. “I use it to fly back and forth from San Diego to Sacramento. When we’re in session, I leave my car at the beginning of the week and pick it up on Friday. It comes in handy when I have to come home in the middle of the night. I also use it to go to conferences.” As for the personal-use exclusion, she isn’t aware of any sort of auditing by the airport authority. “We’re on the honor system, I guess. I wouldn’t use it for a vacation.” Ducheny also stated that she has been required to declare the permit as a gift. She noted, though, “It’s not given personally to me but rather to the office.” However styled or characterized, she has found it useful. “We’re the folks who are always rushing to catch a plane at the last minute. I always see the same Congress people parked there.”

Expanding on the pithy list contained in the application, the authority sets out a more expansive roster of those it deems eligible for free airport parking. Included are foreign consuls who “serve” San Diego County; federal, state, and local politicians; airline employees; authority boardmembers; employees of government agencies such as the Federal Aviation Administration, the Port of San Diego, the Transportation Security Administration, and the U.S. Customs and Border Protection; concessionaires, contractors, suppliers, and vendors. All told, some 1111 individuals stand in the ranks of the theoretically eligible. Out of that group, several hundred — 95 of whom are politicians or airport authority bureaucrats — have a card to swipe.

Among the dozen or so permit-holders I attempted to contact for details on usage, there seemed awareness that a perk of this sort if widely known to the public might come under scrutiny. Thus, answers to my questions were circumspect. I queried Steve Walker, who serves as a deputy communications director in the district attorney’s office, about Bonnie Dumanis’s free parking. “Suffice it to say that she uses it for official purposes only — for example, when she flies up to Sacramento to testify before the legislature.” However, he demurred when I asked for other typical scenarios. “I won’t go into a laundry list.” Walker also said that he didn’t know how Dumanis obtained the permit, saying, “You’d have to ask the airport authority about that.”

According to airport spokesperson Katie Jones, usage is, under the authority’s policies, supposed to be monitored by means of regular audits. However, none of the free parkers with whom I spoke seemed aware of such oversight, nor did they recall having submitted an application. (Ducheny said, “They just offer it.”) It is clear, however, that any oversight rests with Thella Bowens, who’s at the apex of the parking pyramid.

Bowens, who was appointed in 2003, has the ultimate say-so when it comes to enforcing usage restrictions on permit-holders; she also has the power to confer eligibility on “other individuals whose use [she deems] consistent with the objectives set forth in Paragraph 1.” However, according to Katie Jones, the emolument of free airport parking is, at most, a fleeting blip on Bowens’s radar screen. She states that Bowens is simply “too busy to care” about who lands a pass and how permittees use them.